On top of hosting the majority of my Six Rules Compliant artwork, salsabomb.com also the site of a new blog I've created to track new media and new work, with a focus on truly participatory media and to serve as a watchdog for it's pitfalls. Come say hi and let me know if you're missing from the blogroll. 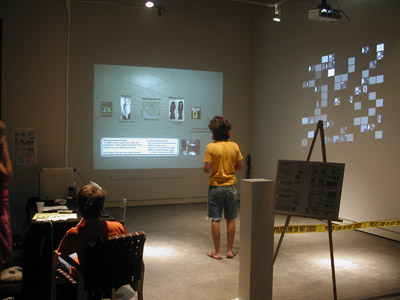 From an Artist's Perspective Artist Mathias Fuchs gives his perspective on Art Games. In his terminology, Game Art is the right word to use.

First 'Video killed the Radio Star', then the interactive media made video look blunt, and now computer games seem to be more sexy than any other media ever has been ...

Read all the articles in Artificial's Special on Art Games: http://www.artificial.dk/articles/artgamesspecial.htm

‘Open Vice/Virtue: The Online Art Context’ is an exhibition and public production space featuring real-time, online collaboration and
interventions in public and private spaces by software artist Andy Deck. HTTP Gallery is pleased to present this solo show by American artist Andy Deck, as part of NODE.London season of media arts. For this, his first exhibition in London UK, Deck uses the Internet, the gallery and public space to challenge corporate control over communication, tools and software, and by extension the social imagination.

'The giantism of media corporations and the ongoing deregulation of media consolidation (Ahrens), underscore the critical need for independent media sources. If it were just a matter of which cola to drink, it would not be of much concern, but media corporations control content. In this hyper-mediated age, content -- whether produced by artists or journalists -- crucially affects what people think about and how they understand the world. Content is not impervious to the software, protocols, and chicanery that surround its delivery. It is about time that people interested in independent voices stop believing that laissez faire capitalism is building a better media infrastructure.' Andy Deck

Glyphiti is an online collaborative drawing project resented uniquely at HTTP. A large-scale projection forms an evolving graffiti wall and visitors to the space are invited to edit and add graphical units or 'glyphs', which compose the image, in real time. The marks made by each person, combine with others and are shown as a time-lapse image stream. Hanging fabrics being shown here for the first time provide a tactile document of recent years’ of Glyphiti. Unlike most image software available on the Internet, Glyphiti functions through most corporate firewalls by ...

http://www.perpetualartmachine.com Cinema-scope and IFAC are seeking video art submissions for: PAM - The Perpetual Art Machine to be premiered as a featured project at the -Scope New York Art Fair March 10-13, 2006.