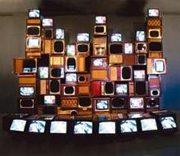 First Generation: Art and the Moving Image, 1963-1986 is the title of a recently opened show at the Museo Nacional Centro de Arte Reina Sofia, Madrid. It assembles early video and video performance work mainly focusing from their own collection with emphasis on specific approaches to the medium during the first 25 years. It includes as main themes the inspiration of Fluxus, the critique of commercial television, the relationship between the medium and the viewer, feminism, performance and the legacy of minimalism and conceptual art.

First Generation does not aspire to be a thematic exhibition, nor does it try to follow a strict chronological order. Rather, it is a global vision of how and why a technology of recording, broadcasting and reproducing sound and images, which emerged in 1950 --and technically different than cinema-- became an artistic medium;

a 'study' of the influence technology and mass culture had on the social and artistic changes of an era, at a time when cultural acceleration and the cross-pollination of ideas was beginning. In this sense, 1968 marks a before and after in this history: for that was the year in which a portable, relatively affordable television set appeared on the market, opening this medium up to a vast new group of people.

Interesting in this context might be as well the link to the complete archive of the early media magazine Radical Software:

The historic video magazine Radical Software was started by Beryl Korot, Phyllis Gershuny, and Ira Schneider and first appeared in Spring of 1970, soon after low-cost portable video equipment became available to artists and other potential videomakers... [blogged on mind the __GAP*?] [Related]

Getting Political About Media Studies

Two conferences taking place in Europe, this weekend, trace new political movements in the field of media theory. Both consider the role of representation in entrenching or perpetrating war. 'Under Fire' (underfire.eyebeam.org) at Spain's University of Seville, in partnership with the city's International Biennial of Contemporary Art, focuses on war and armed conflict, with a special component on media (mis)representations of Islamic culture. At Genoa, Italy's Villa Croce Contemporary Art Museum, a conference entitled 'Resistant Maps: artistic actions in the interconnected urban territory' looks to cartography, that medium long problematized by postmodern scholars, for answers to questions about shifting balances of agency. Taking as its premise the idea that the 'representation of territory holds a historical role in the privileges of power,' participants will consider the role of psychogeography, new locative media devices, and other means of redrawing lines in reclaiming contested space. The two conferences seem catalyzed by current struggles in the Middle East, and the lineup for both features some of the most active media ecologists and activists in the field, including Jordan Crandell, Friedrich Kittler, Ana Valdes, and Eyal Weizman at 'Under Fire,' and Vittore Baroni, Nicola Bucci, Brian Holmes, and Alessandro Ludovico, at 'Resistant Maps.' The latter also coincides with an exhibition featuring work by Cartografia Resistente, Giuseppe Chiari, Guy Debord, and others, bringing a deeper artistic context to intervention. All in all, the conferences reflect a refreshing movement towards engagement with contemporary political issues and an effort to think not only of how new media contributes to these issues, but also how it might adequately address them. - Marisa Olson

For a long time I would go to bed early

A la recherche du temps perdu / In Search Of Lost Time is a performance by Karl Heinz Jeron and Valie Djordjevic.

Using the electronic versions of the first three parts of Marcel Proust's masterpiece from Project Gutenberg, the performers are reading the machine-code version of the novel. The text is first deconstructed into its individual parts - the letter and characters - which in turn are decoded into the Ascii-code. Each letter is represented by an individual sequence of signs, consisting of zeros and ones. In a mock laboratory, one performer is reading the zeros, the second person reads the ones. A third person embodies the CPU (the Central Processing Unit): she interprets the zeros and ones with the aid of an ASCII allocation table, cuts out the corresponding letter from the prepared sheets and turns it over to a fourth performer, Display, who sticks it onto the wall panel.

After eight hours of performance about 250 characters can be processed.

Now this is my idea of a great project. La Recherche du Temps Perdu used to be my favourite book. I read parts of it over and over again. That was such a long time ago and i'm really happy that some people out there have found a way to catapult classical French litreature into the realm of new media art.

Photo: Martin Howse from the images of the performance in London.


The framed interview project continues with the publication of four new interviews with new media writers and artists now online at http://www.framejournal.net :

Michael Atavar is an artist who works with digital art, installation and performance, using methodologies of chance and process to make work both in real time and in the online environment.

Sean Cubitt is currently Professor of Media and Communications at The University of Melbourne. His books include Digital Aesthetics, The Cinema Effect and EcoMedia.

Chris Joseph is a writer and artist who has produced solo and collaborative work since 2002 as babel. His projects include Inanimate Alice, an award-winning series of multimedia stories produced with novelist Kate Pullinger, and The Breathing Wall, a groundbreaking digital novel that responds to the reader's breathing rate.

Mez is a pioneer of code poetry, net.wurks and the unique net.language Mezangelle. Mez has exhibited extensively including at ISEA 1997, ARS Electronica 1997, SIGGRAPH 1999 & 2000. Her awards include the 2001 VIF Prize [Germany], the JavaMuseum Artist Of The Year 2001 [Germany], 2002 Newcastle New Media Poetry Prize [Australia] and the winner of the 2006 Site Specific Competition [Italy].

These are the latest in the framed series of interviews with new media artists and writers in which they discuss their practice, both past and present, and the current state of new media art and writing. The Fruit Fly Farm is built as a wearable object for people to adopt and carry around. It is a personal "pet" and wearable system with a public access via mobile phone.

A camera phone, embedded in the sculpture, is observing the fly community. Anyone can access the phone camera by sending a sms to the piece. The camphone will then capture an image and send it back as an MMS. The photo along with the sms-messages (comments) will also be uploaded to a dedicated website.

The fly nest is located in the middle of the 20 cm wide transparent acryl ball. The nest capsule contains rotten fruits and needs to be re-filled approximately once a week. Small holes allow the flies to fly in and out of the nest.

In the same series of "wearable" future works which address the society and surrounding environment as the their theme: The Head.

UbuWeb has converted all of its rare and out-of-print film & video holdings to on-demand streaming formats a la YouTube, which means that you can view everything right in your browser without platform-specific software or insanely huge downloads. We offer over 300 films, videos from artists such as Vito Acconci, Pipilotti Rist, Jean Genet, The Cinema of Transgression, Richard Foreman, Shuji Terayama, Jack Smith, Carolee Schneeman, John Lennon and hundreds more. Presented in conjunction with our partners at Greylodge.

The Net as an Artwork

Networking: The Net as an Artwork represents a first tentative reconstruction of the history of artistic networking in Italy, through an analysis of the realities which during the past twenty years have given way to a creative, shared and aware use of technologies, from video to computers, contributing to the formation of Italian hacker communities.

Written by Tatiana Bazzichelli, with the preface of Derrick De Kerckhove and the epilogue of the videoartist Simonetta Fadda. Networking means to create nets of relations, by sharing experiences and ideas in order to communicate and experiment artistically and where the publisher and the reader, the artist and the public, act on the same level.

In Italy, thanks to the alternative use of Internet, during the past twenty years of experimentation a vast national network of people who share political, cultural and artistic views has been formed. Active in underground environments, these projects use diverse media (computers, video, television, radio and magazines) and deal with technological experimentation, or hacktivism, depending on the terminology used in Italy, where the political component is a central theme.

The Italian network proposes a form of critical information, diffused through independent and collective projects where the idea of freedom of expression is also a central theme.

The book describes the evolution of the italian hacktivism and net culture from the Eighties till today. At the same time, it builds a reflection on the new role of the artist and author who become networker, operating in collective nets, reconnecting to neoavant-garde artistic practices of the 1960's (first and foremost Fluxus), but also Mail art, Neoism and Luther Blissett.

A path which began in BBS, alternative web platforms diffused in Italy half way through the 1980's even before Internet even existed, and then moved on ...

Schwizgebel's pioneering animation looks more at home today than it ever did in the early 1970s.

Expanded Cinema is a new blog by the curator Joao Ribas:

"I've received quite a few emails asking why I haven't curated something online, particularly in terms of culling film and media, and things that are hard to incorporate into more 'conventional' exhibition formats. I've taken the suggestion seriously and decided to launch this online platform for just that, Expanded Cinema. I'll be posting some material here every few days, along with guest curators, as part of a series focused mainly on experimental film, early video, and sound-based, durational work. All of the material is being pulled from available media online elsewhere, as part of emphasizing an overlooked facet of the archival function of new media."

The Mondrimat is a simple system which lets you experiment with space, color and visual rhythm in accordance with the theories of Piet Mondrian. For some reason pleasing, stimulating, even exciting results seem to occur quite frequently. 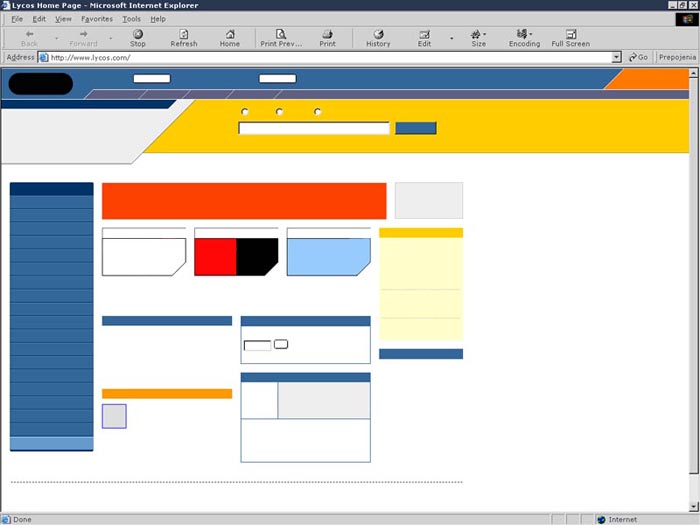 "www.lycos.com." The idea of the "Project www" refers to the mechanisms of manipulation, affecting the seemingly free space of Internet. The author has erased and cleaned out all textual or visual content of selected web-sites, leaving behind their original graphic only. This way he confronted viewer with well known but empty visual representations, counterpointing the reality of web-sites always packed with information. By Marek Kvetan.