We live in a remix culture. Our modes of communication are, to some extent, predetermined by software and interfaces that presuppose a tendency to copy and paste. Musicians' remixes are often released simultaneous to the original track, now, and even the word 'remix' has attached itself to the name of soft drinks, food products, cinematic sequels, and other cultural artifacts. Arguably, this condition has been perpetuated by digital artists, from pioneering DJ's to filmmakers, to net artists. The conditions of remix culture form the basis of the SOUND//BYTES_ exhibition on view through April 15 at the Edith Russ Site for Media Art, in Oldenburg, Germany. The show features installations, performances, presentations, acoustic walks and interventions in the City of Oldenburg which 'offer the visitor manifold possibilities to question echoes, sounds, rhythms, frequencies and electro-magnetic fields and to perceive everyday situations acoustically in a new way.' The artists' works help us to rethink what constitutes a unit of sound, and the ontologies, politics, and aesthetics of the ways in which these 'sound bytes' work together. Jens Brand, Carl Michael von Hausswolff, Yunchul Kim, Thomas Koner, Christina Kubisch, Akitsugu Maebayashi, Kaffee Matthews, micromusic, and Annina Rust present projects that employ laptops, gameboys, electromagnetic fields, record players, GPS readers, radar, ASCII code, radar, a metronome, and other devices to capture and transmit sonic phenomena often overlooked and under-recorded. Together they not only rethink acoustic space, they also contribute to a new environment in which to consider the social life of sound. - Marisa Olson

More work by Edwardo Kac, again of course fitting in with the idea of networks but also this time specifically communication through audio or vocal means.

Dialogical Drawing (image above) is a two part networked art object, sculptural almost totemesque in form, which enables two viewers to communicate between two distinct spaces. The scenario is as follows:

At first the viewer contemplates the piece in the same manner that she normally looks at wall-mounted works of art. The viewer stands at a comfortable distance and sees a composition of lines, circles, and rectangles created with circuit boards, wires, microphone, and speaker embedded on a vertical mahogany piece. Because the viewer does not see antennae or external wires, she considers the piece a discrete art object, like a painting or sculpture. Soon, however, the viewer notices that sounds are in fact coming from the speaker. The viewer moves closer to the piece and listens more closely. Surprised, the viewer realizes that the sounds are human voices coming live from another location. Ceasing to contemplate the object, the viewer now engages the other viewer co-present in a remote location. Both viewers start an improvised dialogue which constitutes, in essence, the “drawing” alluded to in the title of the piece.

Essay Concerning Human Understanding (diagram above, image below) takes it’s title from one of John Locke’s essays concerned with how the human mind acquires knowledge through experience (that old Nature vs. Nurture bag). It is a:

a canary dialogues over a regular phone line with a plant (Philodendron) 600 miles away…
By enabling an isolated and caged animal to have a telematic conversation with a member of another species, this installation dramatized the role of communication and telecommunications in human lives. The ...

Originally posted on supercentral by Rhizome 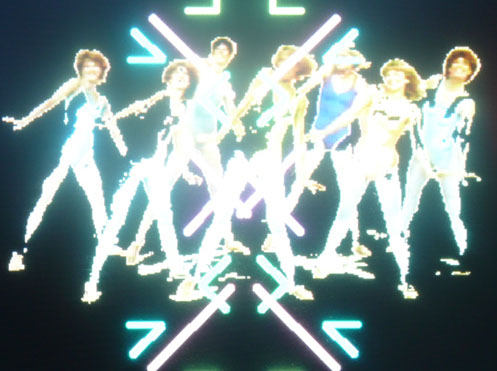 DEAF presents a wide range of programme segments, including, of course, a large exhibition of interactive artworks and installations. There will also be concerts, performances, seminars, workshops and an academic symposium. The festival is characterized by a thematic approach. Its aim is to bring current developments and themes around art in our technological culture to a diverse audience.
DEAF is one of the most important international festivals focusing on art and media technology, and it can be regarded as a showcase for research for and production of new media art (some specially commissioned).
This festival in Rotterdam is the ideal place for representatives of various networks to meet and inspire each other, and for international critical debate to take place. 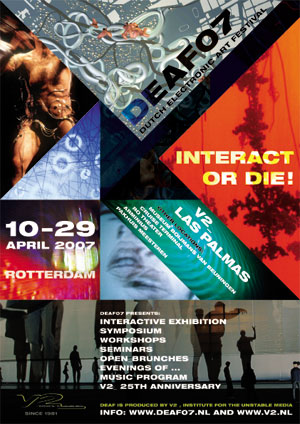 Here are some more pictures from the opening at Laboral! Pretty amazing space and some really cool work on display there!

Alerting Infrastructure! - my project installed there!

Originally posted on coin-operated by jonah

with Horit Herman-Peled (IS), Brooke Singer (US), Paul Vanouse (US), and Sean Cubit (AU) moderated by Tim Murray (US) and Renate Ferro (US)

From surveillance and mobile technologies to fears and public panic, the ambivalent attraction of technologies of terror shifts registers between post-cold war and post 9-11sensibilities, whether from international or cross-generational zones of engagement. We will discuss how panic, paranoia, critical resistance to, and appropriation of technologies of terror are mediated by the threat and fear of violence in the interlinked networks of mobile media, domestic space, and the public sphere.

WHEN: April 12, 7 pm WHERE: Art Interactive, 130 Bishop Allen Drive, at the corner of Prospect Street, Cambridge. Free parking in the lot on the corner or take the T to Central Square and walk 1 block.

Cati Vaucelle is a PhD student and research assistant at MIT Media Laboratory's Tangible Media group with Dr Hiroshi Ishii. She has degrees in Philosophy, Fine Arts, Computer Science, Mathematics, and Economics. Her current work examines the interdependencies of the virtual and the physical, and explores the fundamental differences between them.

Yasmine Abbas holds a Master of Science in Architecture Studies (SMArchS 2001) from the Massachusetts Institute of Technology, and a Doctor of Design (DDes 2006) from Harvard University Graduate School of Design. In 2005 she founded neo-nomad, a digital platform dedicated to design and mobility in the digital world. Abbas teaches at Northeastern University and Wentworth Institute of Technology, Boston.


Pixel Pops! 2007, the artist curated exhibiton, is looking for curators/artists/organizers for the next edition to take place sometime in October 2007 (date negotiable).

Domain name, web and support included. We launched it, now it's time to pass it on!

It was in New Haven, CT, USA one year and Prague, Czech Republic the next. Where will it travel in 2007?

This year we have online submission and jurying tools to make it easier for you. The theme this year is Short and Fast in...you name the place. Check out the website to get a better idea of what goes on: http://www.poppingpixels.org.