On March 20th of this year, a vast and promising new space opened in Gijon, Asturias: the LABoral Art and Industrial Creation Centre. Devoted to the 'the exhibition, research, training and production of new art and industrial creation,' LABoral opened with four exhibitions: GAMEWORLD, EXTENSIONS-ANCHORS, LABCYBERSPACE, and FEEDBACK--the latter of which was organized by Charlie Gere, Christiane Paul, and Jemima Rellie.

The three curators bring a tremendous amount of experience to FEEDBACK, a show that is ambitious in both scale and premise. Charlie Gere is Reader in New Media Research in the Institute for Cultural Research, Lancaster University & Chair of Computers and the History of Art (CHArt); Jemima Rellie is Head of Digital Programmes at the Tate; and Christiane Paul is Adjunct Curator of New Media Arts at the Whitney Museum of American Art and director of Intelligent Agent. All have published widely on digital art and new media.

Their exhibition breaks down established boundaries between disciplines to present a fresh perspective on art history, one that connects new media to artistic practices not usually seen as historical precursors.

[Please click-through for the interview, in its entirety.]

Why should the licence of an artwork be interesting?

[Rhizome Editor's Note: An interesting debate has begun to unfold, on the significance of copyright licenses to works of art, between AFC's Paddy Johnson, MTAA's TWhid, and Rob Myers. Below is an excerpt of Myers's eloquent response to the debate. Click-through to the links above for the full missives.]

Most artworks have a legal status as copyrighted works, as designs, or at the very least as insured objects. Some, such as works by Carey Young, are legal documents themselves. The law provides a kind of ontology for artworks. But unreproducable artworks are more interesting when the unreproducability is a technical rather than a legal effect.

Artworks often have certificates of authenticity, and contracts and guarantees were the stuff of 1960s conceptualism. Sales documents are important in establishing provenance, and recipts are important when filing tax returns. But usually the paperwork of an artwork is of peripheral interest at best.

Alternative licenses are not part of the legal orthodoxy of society though. They are a signal of dissent (or at least a desire for reform). They are political to a degree. Applying one to a work is a small political act. [More....]

Originally posted on robmyers by Rhizome

Pixelazo: Wandering the streets of Medellin Gabriel Zea, Andres Burbano, Camilo Martinez and Alejandro Duque are walking Derive-style the streets of Medellin with their BereBere project.

Inpired by the mimoSa project, BereBere is a mobile apparatus equipped with videos and audio sytems for streaming, sensors (CO2 emission, electrosmog, wireless networks, temperature, etc) to monitor the state of the city and GPS instruments to map these data. BereBere uses only open technologies (both software and hardware) and its members wander through the streets inviting passersby (especially those who might not have access to these technologies) to participate to the creation of contents but also to its discussion and diffusion.

They collect, archive and create visual and audio maps that represent an artistic and experimental portraits of the communities.

In association with and linked to Auto Emotion, The Power Plant presents Pulse Front: Relational Architecture 12, a new commission by Montreal-based artist Rafael Lozano-Hemmer. Pulse Front features a matrix of light over The Power Plant and Harbourfront Centre, made with light beams from twenty of the world's most powerful robotic searchlights. The installation is entirely controlled by sensors that measure the heart rates of passersby. Ten metal sculptures with embedded sensors and computers are placed along the harbour where they detect the pulses of people who hold them and convert them into light pulses. Computers also determine the orientation of the beams, recording changes in participants' physical and emotional states. The resulting effect is a visualization of vital signs, arguably our most symbolic biometric, in an urban scale.

half/theory represents a loose collective of Australian and New Zealand artists and researchers involved in experimental music, emerging artforms, education, and esoteric research. half/theory provides extremely cheap web server space as a platform for representing some of the many dedicated and unique projects from Australia and New Zealand that would otherwise remain in obscurity. The half/theory shop provides a central marketplace for the world to obtain works by people in the collective. It is intended that the majority of these works will be self-published, sometimes in handmade or numbered editions, and only available in small quantities. half/theory was established by improvising musician and website administrator Scott Sinclair in 2003.

Artists’ interests encompass generative art, self-made instruments, self-made film, audio visual performance, cracked electronics, new improvisation… all art that is committed to exploring beyond preconceived notions of human/technology interaction, and is dedicated to embracing chance factors (or “errors”) as a necessary and desirable part of the work.

The Robot Zoo is Now Open!

Artist Leonel Moura advertised his latest project, the Robotarium X, with a grand announcement that 'The first zoo dedicated to artificial life is now open at Alverca, Portugal.' In a park in this small village near Lisbon, Moura has installed a large-scale steel glass construction inspired by the bilunabirotunda, one of the famous geometrical forms known as 'Johnson's solids.' Since June 12, forty-five different robots have lived within this structure--most powered by photovoltaic energy. All of them are original creatures specifically designed by Moura and his partners, Carlos Nogueira and the company IdMind, for the 'Robotarium X.' They represent fourteen species differentiated according to body morphology and behavioral patterns. Some resemble small vehicles similar to those currently used in space exploration; others are similar to small animals, insects, and plants; while others are distinct from anything found in Nature. Many are responsive to humans, and execute subsistence-related activities. Informed by the enlightenment movement's educational displays (like the aquarium) and mixing new technologies and his past experience as a user of robotics within an art context, Moura created an experimental, futuristic work that constitutes a step forward in the ongoing relation between humans and machines that marks the beginning of the twenty-first century. - Miguel Amado

With her video installations, photographs, and short films, Australian artist Lynette Wallworth creates communal environments that respond, like natural ecosystems, to human presence. At her current show at the British Film Institute (open June 23-September 2), her new work, Hold: Vessel 2, invites visitors to carry a lens-shaped glass bowl through a cavernous room. By moving through the darkness with a ritualistic posture of supplication and offering, viewers 'catch' projected still and moving images of microscopic underwater life forms and deep outer space. Participants inevitably interact with each other; the artist structures her works to 'encourage temporary interdependence.' While her user interface is simple and transparent, Wallworth's collaborations with specialists in contemporary scientific visioning technologies--the BIO-Rad confocal laser scanning microscope, X-ray Microtomography, and remotely operated light-sensitive cameras--reveal images of the world that are invisible to the naked eye. Placing the human subject at the nexus of a microcosm and a macrocosm largely outside the reach of everyday experience, the artist offers access to those wondrous hidden realms while hinting at the infinite 'unknown unknowns' beyond. Hold: Vessel 2 is a visceral reminder of our interconnectedness within the vast and complex system of the universe--a feeling which, according to the artist, is 'a useful sensation to achieve.' - Marcia Tanner 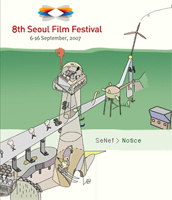 The 8th Seoul International Film Festival is open for entries. Seoul International Film Festival Net Section is trying to introduce talented visual artists all over the world and their brilliant works and to lead the new audio-visual experiences based on the Internet and New Media. We sincerely hope you consider this exciting opportunity to show your great endeavors in the digital convergence era.

WHEN : September 6 - December 31, 2007 :: WHERE : WWW.SENEF.NET / Mobile and DMB :: SUBMISSION DEADLINE: July 13, 2007 :: ELIGIBILITY: For the official competition section, only works completed after January 2006 may be submitted to the Festival. Submissions should be creative works produced or adopted through digital technology. There will be no restrictions regarding the genre, length or subject matter of the work and all types of works, including fiction, documentary, experimental work, music video, animation, motion graphic, flash animation, game, web-art, etc. will be accepted.

Oscillons & the art of Oscillography.

Originally posted on dataisnature.com by Rhizome