announcing the launch of vague terrain 07: sample culture The latest edition of the Toronto based digital arts quarterly vagueterrain.net is now live. The issue, vague terrain 07: sample culture is a provocative exploration of contemporary sampling of sound, image and information. This body of work examines the remix as a critical practice while addressing broader issues of ownership and intellectual property.

Interview with the Institute for Applied Autonomy

According to what i have eaten in the morning i am either a bit cynical about the real impact of activist projects or totally enthusiastic about their objectives and methods. Most of the time i am both. It also depends on the cleverness of the activists themselves. I still have to find any trace of ungainliness when it comes to The Institute for Applied Autonomy. The anonymous activist group believes in the importance of disseminating knowledge, encourages autonomy, and develops methods of self-determination through artistic expression and application of military-like technology to the topics of criminal mischief, decentralized systems and individual autonomy.

You might have read or seen one of their pamphlet-distributing or spray painting robots or participated to the protests during the 2004 US presidential campaign, by using their TXTmob system. The Institute for Applied Autonomy (IAA) was founded in 1998 as an anonymous collective of artists, activists, and engineers united by the cause of individual and collective self-determination. Why did you decide to stay anonymous? How much does that anonymity serve your objectives? Is it part of a strategy?

Initially, we embraced anonymity as a defensive tactic, as many of our projects exist in a legal grey area. Working collectively and anonymously seemed natural to those of us with backgrounds in direct-action politics and the hacker and cypherpunks communities. Groups like Cult of the Dead Cow and native Hawaiian activists Hui Malama gave us a model for action that was both publicly engaged and effectively anonymous.

We've also found anonymity to be a useful tactic in dealing with the press. Many journalists seem to be more interested in writing about artists than about the art they create -- this is particularly true when the work has explicitly political content. By refusing to provide any personal information about ...


Question: What happens when you turn forty-five video artists loose in forty-five hotel rooms across the State of Connecticut? Answer: the exhibition 50,000 Beds. Organized by artist Chris Doyle, 50,000 Beds commissioned 45 new video works to be exhibited in specially designed "multi-screen" galleries at three venues: Artspace (opening July 20th), Real Art Ways (opening July 21st) and The Aldrich Contemporary Art Museum (opening July 22). The exhibition focuses on the hotel room as a site filled with narrative potential. Familiar yet foreign, a hotel room combines experiences of both intimacy and anonymity. The short videos will show a diverse range of artistic responses and themes. Amongst participating artists are Marina Zurkow, Jennifer and Kevin McCoy, Eve Sussman, Ricardo Miranda Zuniga, Nina Katchadourian and many more. For details on the exhibition go to: http://www.50000beds.net/

WUNP is a radio station produced by neuroTransmitter (Valerie Tevere + Angel Nevarez) for United Nations Plaza. WUNP is a portal for broadcasting audio works and conceptual radio projects. Over the course of the summer and fall of 2007 WUNP will be on air. 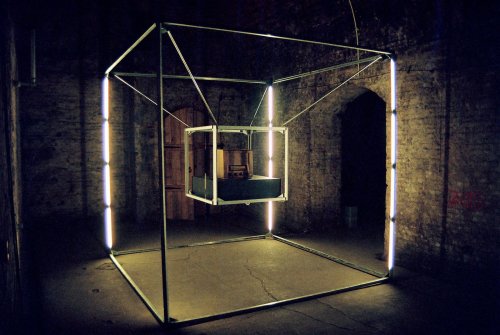 SOUND INSTALLATION
The installation is characterised by the interplay of two concepts that we will define as Displacement and Extension. Through its use of radio signals that are being received in real time, and those that are digitally pre-recorded, the work posits an extension of the artistic experience (or at least of natural phenomena that can be apprehended as artistic material) beyond the physical location of the gallery space.

Despite the fact that the internet is often described as anarchic and abyss-like, many of the contemporary artists responding to it in their work have recently espoused a discourse of self-help and positivism. In Lou Laurita's current show at New York's Guild & Greyshkul gallery, 'There's a Party Going On,' the artist draws from excerpts of online profiles, affirmations, and pop songs. Using 'traditional' media to engage digital culture, Laurita's large scale gouache paintings employs the visual and verbal dialect of that region known as the internet. His montage of found jpegs and snipped texts, in which the image's shape is defined by the letters in the selected phrases, is dialectical in effect. Something greater than the sum of these parts emerges as we take in an image that causes us to think about the code by which the paintings were constructed and its relationship to the construction of identities and sites on the web. In the case of each of these assemblages, there is an intensive self-reflexivity to the manufacturing process, which is nicely mirrored in Laurita's works, which are so meticulously rendered as to scream 'representation.' The artist's hand in repurposing these fabrications calls attention to the dynamics of his role as spectator (and, in turn, ours, as viewers of his work) in the consumption of private lives offered-up for public display. - Marisa Olson

Originally posted on del.icio.us/network/marisaolson by cybersex

“WE ARE ALL READY FOR A CHANGE”

Wired called him "the king of Digital Art". Maybe this headline is a little bit exaggerated, but what's true is that Steven Sacks is one of the few people in the world who are able to make New Media Art digestible for collectors. Steven is the founder of the well known bitforms gallery in New York, but what tickled my attention, and gave rise to this little interview, is another - maybe less significant, but more visionary - initiative: softwareARTspace.

Eyebeam is not your conventional gallery. In the cavernous near-darkness of its exposed brick exhibition space, Crowley's Australian cadence competes with a soundscape reminiscent of an arcade. She serenely describes each of the fourteen projects that make up Source Code, the first of three exhibits commemorating Eyebeam's 10th anniversary on the frontier of the digital world. The work here represents artists, programmers, hackers, activists, youth - the kind of people Eyebeam welcomes into its creative laboratories, where innovators of all stripes come to come test their ideas.