De Pong Game is a recycling of the famous game PONG [Atari 1975-1977]. This new version has been built with Flash [Action Script] by Arjan Westerdiep for Recyclism (Benjamin Gaulon).

This project is exploring the concept of Augmented Reality by using and interacting with urban architectures [buildings] as background for the game. Thus the game is projected on a building and the limits of that building are becoming the limits of the game area. The ball projected on the building bounces along the limits of the walls. The software is also using the windows as an obstacles for the game. So the ball is limited to frame of the building. As you touch the ball with the slider, its speed increases and because the ball bounces on all the obstacles of the architecture it becomes more and more difficult to play.

VertexList has the pleasure to present SELF 2.0, a group exhibition of emerging US based media artists. On display recent projects by Mike Beradino, Charles Beronio, Zachary Biberstine, Kara Hearn, Jia Lim and Laura Nova. Commenting on the contemporary strategies of electronically mediated self, SELF 2.0 introduces new and exciting voices of artists from across the country.

Live circuit music performance by Jamie Allen/Season of the Bit @ the opening reception.

Monkey Town, Williamsburg's singular video eatery, offers a twice-yearly video art program - called our 'semiennial' - of the high water marks, the standouts, the stuff we've seen that really made an impression: the immersive video equivalent of "come hang out at my place and listen to some records." The curatorial criteria are no more complicated than this is the best new stuff we've seen. We continue to be turned on to great work and we're just itching to pass it along.

Please join us at the American University Museum at the Katzen Arts Center in Washington DC for the East Coast debut of Christina McPhee's Carrizo-Parkfield Diaries. Christina McPhee's art explores the phenomenology of place in new media, photography, drawing, sound and the net. This is the first time that the Diaries will be seen in their entirety on the East Coast.

CHRISTINA MCPHEE presents large-scale photoworks, video and high-definition video from her acclaimed Carrizo-Parkfield Diaries, a meditation on seismic memory and identity along the San Andreas Fault in California, exploring the synchronicity between natural disaster and human trauma.

In the first of a new series of weekly blogs, Ana Finel Honigman is going to be picking the best art on the net.

An independent, completely free archive that operates without official funding, is a peerless source of brilliant artistic materials, ranging from previously impossible-to-locate clips such as a1973 interview of Jacques Lacan by his son-in-law Jacques-Alain Miller on French television, to Richard Kern's grainy, dark, pornographic art/punk films from the 1980s.

If that's not enough, there's video of Billie Whitelaw doing Beckett, excerpts from Peter Greenaway's series of documentaries on modern US composers and Orson Welles' delightfully wacky The One-Man Band, a fascinating, dark, glimpse into the film-maker's final years.

UbuWeb's content is refreshingly unique and challenging - and so is its approach to copyright. It irreverently disregards intellectual property concerns as its mission statement shows - "[we are an] unlimited resource with unlimited space to fill," "post[ing] much of [our] content without permission; we rip out-of-print LPs into sound files; we scan as many old books as we can get our hands on; we post essays as fast as we can OCR them." And fast ... 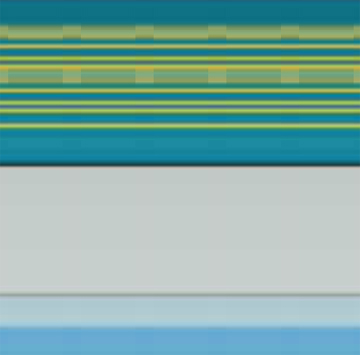 glich-gen by DreamAddictive lab is the digital deconstruction of an image that suffers a rupture in its source code, this rupture is known as a system error. Glich-gen uses a series of errors processed through a source code in actionscript 2 in order to generate computer animations based on image errors.

Audio Kinematics by Jost Muxfeldt works with the idea of kinematic relations on the level of sound: a virtual audio sculpture. It utilizes the spatial relations and proportions of a mechanical structure to determine various parameters of a sound composition, and creates a kind of virtual kinetic sound sculpture. Whether the sound is visualized or the speeding diagrams are set to sound is unimportant. It is a total art work which addresses both senses. One does not have to understand the explanations about sine waves, amplitude modulations, kinematics, or binary tree structures in order to enjoy this work.

Audio Kinematics will be on display from June 14 to 16 at the Centre d'Art Santa Mónica in Barcelona as part of Sonar Festival 2007.

Inspired by pioneering artists in the field of Interactive art such as David Rokeby and Myron Kruger, Nathaniel Stern builds upon their work by reintroducing traditional art- making techniques to reinterpret digital records of movement. In the first half of my interview with the artist we discuss works leading up to, and informing his current body of prints he titles Compressionism.In these images Stern manipulates visual documentation of movement distorting memories or impressions of the body.

Speculative Data and the Creative Imaginary:
Shared Visions between Art and Technology

For more information about the 2007 ACM Creativity and Cognition Conference: http://www.cs.umd.edu/hcil/CC2007/

For more information about the exhibition and catalog: http://www.nationalacademies.org/ar ts/Speculative_Data_and_the_Creative_Imaginary.html Lisa Roberts and her team at BLINK are busy preparing the second edition of We Love Technology. The event will take place on July 12 and people like Andy Gracie, Mirjam Struppek, Mathias Fuchs, Husman Haque, Julius Popp, have been invited to talk about interactive architecture, sound and games. The best thing about WLT is that the gathering is small enough to allow every participant to get to know the others over the picnic, workshops, performances and breaks. I asked Lisa to tell us more about WLT07.

You're organizing for the second time "We Love Technology" in Huddersfield. Why Huddersfield? Why should people interested in tech-art put the city on their map?

Huddersfield is a big town with equally big ideas and a distinctive and active new media scene. It hosts The Digital Research Unit which is packed with sound artists, games hackers and performers, designers and technologists who generally mistreat and reappropriate technologies.

There is also a 3 month artist-in-residence programme for international artists. They take their experience of Huddersfield with them but often maintain their link through successful partnerships, as in the case of Dan and Tuomo and Tile Toy.

This year WLT will explore interactive architecture, sound and games. What made you choose these particular fields? What do they have in common? Just to get the ball rolling I chose loose themes from the latest, most interesting and active areas of creative technology, but more than anything I try and bring together a good mix of entertaining speakers who are willing to share their ideas. I have learnt not to over-engineer events as a bit of edginess keeps people from dropping off, especially after lunch. You also have to remember that most of the people who come to WLT will get more ideas from 30 mins ...