Becoming Animal: Story of the Kerberos 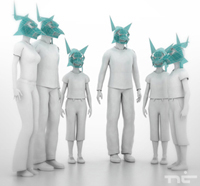 Becoming Animal: Story of the Kerberos

Becoming Animal is an interactive performance piece that develops the story of the mythical three headed beast Kerberos, guardian of the underworld. The objective is to create an environment of performance through the collective participation and conversation of Kerberos and participants in the event. Each participant's presence will stimulate the three heads of the Kerberos triggering behavioral interactions and exchanges. Interactions will be expressed through sounds, facial expressions and general activity of the Kerberos. The continued dialogue between users and Kerberos will demonstrate emotions such as love, hate and anger. Participants will be given custom made masks to interact with the Kerberos and each other. This collective playfulness will construct interactions that evolve and become animal.

The project will be installed at the K9 building in Bentwaters Airbase in Suffolk, England. The K9 building will serve as the entrance to this years Faster than Sound Festival. The installation derives its concept from this threshold (entrance to festival), the K9 building and the sound event to create a piece that is context specific.

Sonarmatica is one of the visual art sections of Sonar, Barcelona's increasingly massive festival of music and multimedia art that runs from June 14-16. This year, Sonarmatica's theme is technological magic and its inspiration is a quote by Arthur C. Clarke, the author of 2001: A Space Odyssey, which states, 'Any sufficiently advanced technology is indistinguishable from magic.' In a moment when the more insidious potential of ubiquitous and imperceptible technologies is often the subject of conversations around issues such as surveillance or privacy, Sonarmatica's theme takes a celebratory approach with the intent to immerse the viewer in a show of 'illusionism and pre-digitization' dense with references to the spectacular experience of magic shows and cinema experiments of the late nineteenth century. Curated by Jose Luis de Vicente, Oscar Abril Ascaso, and Advanced Music in collaboration with Interactivos from MediaLab Madrid, and titled Et Voila!, the Sonarmatica exhibition will present works by an international group of artists, including Luis Nieto, Zach Lieberman, Julien Maire, Phillip Worthington, and Mago Julien, amongst others. Several of the works realize familiar magic tricks, as in Jeff Lieberman's Lightbulb, which suspends a light bulb in the air through the use of a 'magnetic hall effect sensor, an electromagnet, and a [modified] PD feedback system.' Et Voila embraces the opaque, macabre, and amazing facets of technology to present a contemporary magic show. Check out Sonarmatica to decide if you believe or not. - Lauren Cornell

Next net-concert in conjunction with the Auro duet as part of the Encontro de Ani+'s activities. The event will take place at the Evora University in Portugal this June 14th. As part of the concert, the Juum Duet will perform a set of three improvisations in Seattle USA. The musical material will be analyzed and the parameters will be send over the Internet on real-time. The values will be used by the Auro duet for reconstructing the material at the Grande auditorio do Colegio Espi­rito Santo, at the Universidade de Évora.

Juum Duet, integrated by Hugo Soli­s and Gabriela Villa, is a free electroacoustic improvisation ensemble created at the beginning of year 2006. Both musicians, native Mexicans, share interdisciplinary interests and education which include music, music technology, digital media and speech.

Between 1975 and 1977 artists Kit Galloway and Sherrie Rabinowitz developed a series of projects under a heading they called Aesthetic Research in Telecommunications (image above):

Among these projects was the Satellite Arts Project that addressed a multitude of telecollaborative arts and virtual space performance issues that had never been genuinely tested or even experienced. Central to the Satellite Arts Project idea was an aesthetic inquiry that would apply the performing arts as a mode of investigating the possibilities and limitations of various technologies to create new contexts for art, including the emergence of telecollaborative arts on a global scale. In a time when satellites were the only viable means of transmitting full-motion video across oceans in near-realtime (the global context), the artists focused equally on transmission delays over long distance networks, and performed a number of telecollaborative dance, music, and performance scores to determine what traditional genres could be supported, while exploring new genres that would emerge over time as intrinsic to these new ways of being-in-the-world.

As part of this Satellite Arts Project they performed A Space With No Geographical Boundaries (image above) in 1977. The purpose of this performance was:

To demonstrate for the first time, that several performing artists, separated by oceans and geography, could perform together by seeing themselves occupying the same live image - “The image as place.” Everyone would see themselves standing next to each other, able to talk with each other, and ultimately perform together — “A virtual performance space with no geographic boundaries”.

You can find an article entitled Defining the image as place, a conversation with Kit Galloway, Sherrie Rabinowitz & Gene Youngblood here which discusses some of these ideas and was originally published as part of High Performance #37 - 1987. More information on artists Kit Galloway and Sherrie Rabinowitz telecollaborative arts projects ...


Share it with your kids and kids at heart!

Kapital for Kids is an online game environment for children and their parents parodying the various relationships between children's media entertainment, education, and capitalism.

Since 2000, the Daniel Langlois Foundation has supported a number of projects in India. These projects have highlighted, documented and engaged various aspects of Indian culture and ecological issues, including current local and national realities. In this Web publication, we spotlight these projects and their recent developments: http://www.fondation-langlois.org/f 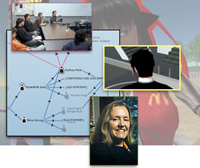 SWITCH: The online New Media Art Journal of the CADRE Laboratory for New Media at San Jose State University is pleased to announce the launch of Issue 23: FUNCTION // BORDER // DYSFUNCTION.

[....] We have explored issues such as failure (its lessons and its utility), borders (real / virtual, body / technology, open / closed), and in what direction "new" media may be going. Issue 23 highlights the diversity of these activities, which we have grouped under the rubric of "Function / Border / Dysfunction". Among other things, we have interviews with Michael Joaquin Grey, Saskia Sassen and Lu Jie. Cultural theorist / art historian Dore Bowen explores "The Function of Dysfunction" in her article on Fluxus event scores. The CADRE Lab introduces its Speaker Salon Series, it's new artist residency with the Montalvo Arts Center and its collaboration with Ars Virtua in sponsoring the Borders conference in Second Life.

About SWITCH: SWITCH is the new media art journal of the CADRE Laboratory for New Media of the School of Art and Design at San Jose State University. It has been published on the Web since 1995. SWITCH is interested in fostering a critical viewpoint on issues and developments in the multiple crossovers between art and technology. Its main focus in on questioning and analyzing, as well as reporting and discussing these new art forms as they develop, in hopes of encouraging dialogue and possible collaboration with others who are working and considering similar issues. SWITCH aims to critically evaluate developments in art and technology in order to contribute to the formation of alternative viewpoints with the intention of expanding the arena in which new art and technology emerge. SWITCH is overseen by CADRE faculty Joel Slayton and Rachel Beth Egenhoefer.

The event will be Webcast

This international symposium brings together some of the world's leading media artists, theorists and researchers to explore real-time interaction in electronic media. Over the last few years network theories have started to shape our thinking about social and cultural issues. This event seeks out artistic strategies and art forms that engage with these ideas. Contributors include: Mark Amerika, Alexander R Galloway, Andrea Zapp, Kelli Dipple, Kate Rich and Paul Sermon.

You can see above how vehicular sensor networks (VSNs) can be built on top of Vehicular Ad-hoc Networks (VANET) by equipping vehicles with onboard sensing devices. You'll find more details by looking at MobEyes research project.

This is one of the projects handled by the Network Research Lab at UCLA Computer Science Department, where computer science professor Mario Gerla and researcher Giovanni Pau are trying to turn your cars into wireless networking nodes.

Ballettikka Internettikka realized by net.artist Igor Stromajer and net.composer Brane Zorman is an internet guerrilla performance. Differently from other net.art works by Stromajer, which are confined to fixed spaces on the Net, accessible from infinite co-ordinate combinations of time, place, and space, "Ballettikka Internettikka" combines the Internet based ubication with the artist's placement in an offline scenario (corporeally speaking), so the intervention takes place both online and offline, conceived as a complimentary effect.

Igor Stromajer's Internet oeuvre is characterized by the substitution of the traditional theatre space by the use of the Internet for his intimate performance.