One of my favourite blogs over the last year has been Remix Theory, a writing project quarterbacked by media theorist and artist Eduardo Navas. Eduardo is also the author of Remediative and Reflexive Mashups in Sampling Culture, a fantastic essay that beat-juggles a variety of paradigms that range from remix history through to data mashups. Eduardo and I have been firing questions back and forth over email for a few weeks and he has provided a compelling window into his research.

[Click-through for the interview.]

Artists often tend to find their concerns and goals intertwined with those of activists thanks to the function--or, or more frequently, the dysfunction--of geography. Sharing the same cities and the same neighborhoods, artists and urban advocates have long occupied overlapping spaces, and a globe-spanning, but LA-centered, show at Los Angeles Contemporary Exhibitions (LACE) brings together several projects that explore contemporary injustices written onto that common landscape through November 18th. Linking academic research, education, artistic practice, and activism, Just Space(s) is divided into six more or less distinct themes, such as 'Prisons and the Prison Industrial Complex' and 'Borders, Labor, Migration.' Several standout projects featured in the exhibition are feats of creative data visualization, including 'Million Dollar Blocks,' a project by the Spatial Information Design Lab that examines city blocks where the U.S. government spends in excess of $1 million to incarcerate its residents, and Teddy Cruz's 'Political Equator,' which created a legible representation of the global divide between north and south. Other works hinge on personal narratives rather than data, such as Ursula Biemann's series of video interviews with oil workers, farmers, refugees, and prostitutes impacted by a new oil pipeline under development in the Black Sea. More than simply chronicling spatial injustice throughout the world, the exhibition aims to function as a center of education and a jumping-off point for action. To that end, several symposia have been scheduled throughout its run, a library has been set up at the front of the exhibition space, and a 'Mobile Planning Lab' has been dispatched to neighborhoods throughout South LA to collect residents' feedback on their local geography and ground-up plans for overcoming spatial injustice. 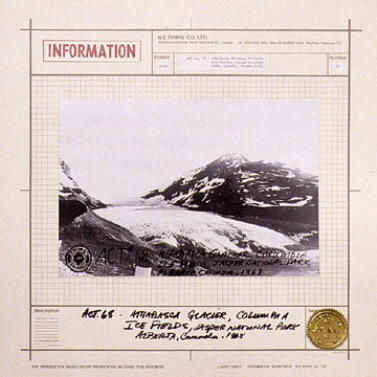 Documentary Protocols I: Emulation of the Administrative Ethos in Artistic Practices of the 1960s and 1970s in Canada may not have the catchiest title, but this unusual show at the Leonard and Bina Ellen Art Gallery at Concordia University in Montreal, engagingly and hilariously lays out a rarely seen element of Conceptual art history. During the late 60s and early 70s a group of Canadian artists, simultaneously deflated and inspired by the tedious administration of Canada's culture industry reimagined themselves through the lens of the bureaucrat. Conceptual artists Iain and Ingrid Baxter formed the highly influential N.E.Thing Co., Vincent Trasov and Michael Morris started The Image Bank, an enormous international databank of images and contact information that grew out of mail art activities of the time, and Joyce Wieland appropriated governmental publications on Northern flora and fauna to question ideas of personal and national identity. Simultaneously questioning and promoting their own roles as 'culture workers,' their ironic use of public relations tools and 'documentary protocols' (in the form of seals, stamps, official letterhead, etc) was a means to turn the day to day business of being an artist in Canada into a viable and engaging practice in its own right. Correspondence, logos, currency, annual reports and other documents are on view both as original documents (in vitrines) and as photocopies (in accessible binders), emulating elements of institutional bureaucracy within in the exhibition design itself and providing evidence of vast artists' communication networks long before the web.

A Review of re:skin
Edited by Mary Flanagan and Austin Booth
The MIT Press, 2007

In re:skin, Grand Text Auto’s own Mary Flanagan and co-editor Austin Booth suture essays, stories, and documentation of projects to flesh out a book that explores our ever-present bodily boundary. The items collected in re:skin are not just about the metaphorical “re-skinning” that one can undertake with a browser or with WinAmp, and not just about the virtual covering that some seek to wrap around 3-D characters. Rather, the book explores how we allow our actual, literal skin to define and segment us and how it can be a medium for expression or a provocation to rethink our concepts of boundary.

From plastic surgery to fur implants, from illegal tattooing to skin grafts, the use of technology to alter the physical body is, for women writers, less a tool for empowerment than a means to construct alternative, multiple selves. Bodily boundaries are malleable, and bodily markers which distinguish bodies are reprogrammable. The pieces gathered in re:skin claim that the technologically mutable body is neither simply liberating nor limiting, but offers instead narratives of ways of living in, and adapting to, a technological culture.

Originally posted on the lion king by cab

Exhibitionism as the fuel of contemporary media culture forms the basis of Showing, an exhibition at TELIC Arts Exchange in Los Angeles. Rather than a show of stand-alone work, artist and theorist Jordan Crandall has converted the space into a platform for several evening-long series of screenings, performances, and other events that articulate how the affective exchanges of blogs, webcams, online social networking, and lifecasting have done nothing less than change the foundation of subjectivity. On September 29th, Glenn Phillips and Catherine Taft present 'Watch Me Get Watched,' which begins with a curated look at voyeurism in the history of video with screenings of work by Bianca D'Amico, Micol Hebron, Sterling Ruby, and Kirsten Stoltman, among other artists who have taken up the act of watching in their work. It is followed by a performance work by Nao Bustamante and a presentation of web-based projects by Gary Dauphin. Other events include a screening program titled 'On the History of Attractions' on October 5, another organized by media scholar Scott Bukatman focusing on the cult of the amateur on October 9, a Web cam workshop on the 12th, a lifecasting presentation on the 13th, and several additions to be announced through October 20. As a whole, the exhibition subordinates traditional concerns of media theory--perception, spectatorship, power--to the primacy of the pose, or in the words of the organizer, it responds to a "culture [that] would seem to be less a representational than a presentational one."

Last week, three organizations jointly promoted a major digital arts project in Lisbon. NIP (New Interfaces for Performance) is an European network of performances developed by Bristol-based collective Polar Produce; Sonic Scope is an annual festival of experimental music programmed by Portuguese artists Nuno Moita and Andre Goncalves; and Upgrade! Lisbon is Lisbon's branch of Upgrade! International, a discussion forum of artists, curators, and theorists engaged with new media coordinated by Luis Silva. Taking place in different venues across the city, from galleries to independent schools and dance studios, several installations, performances, and public debates by artists such as Christina Kubisch, Teresa Dillon, Sonia Cillari, Tom Verbruggen, Andre Sier, and David Maranha have drawn the attention of both established and emerging new media audiences. For example, Cillari has teamed up with sound designer Tom Bugs to create an innovative mix of real-time graphics and modular audio landscapes. 'Struct 7,' one of the works on view at Lisboa 20 Gallery, illustrates Sier's explorations of immersive environments. In this piece the viewer interacts with the debris of previous viewers, which is scattered in a flowing 3D space. Although this was a special four-day event, its success, energy, and risk-taking spirit led the promoters to consider a near future installment, which reveals that Lisbon is more and more positioning itself as one of the most exciting cities for new media in Europe. - Miguel Amado

All in a word

As a term, the word 'archive' carries the weight of multiple definitions. It connotes storage, collection, and preservation. It is a noun, a verb, a physical place, and a state of mind. No longer simply thought of as a repository of dusty old documents and photographs from which we construct the past; in the digital realm the archive has become a place of contested meaning, active engagement, and historical reconstruction. Argos, a Brussels-based center for art and new media, is for the month of October hosting Open Archive #1, a project which unpacks this ever-broadening term. Events include historically informed performances by film luminaries Tony Conrad and Ken Jacobs, a lecture by theorist Laura Mulvey, and symposia on subjects such as YouTube as an active archival repository, and the preservation of media art. In addition, Argos will also open the doors of its own institutional archive to present a series of exhibitions based on their vast collection of single channel video works.

Although it began in the 1990s as another technology-derived term giddily applied to human activities, the word "multitasking" has gone on to not only enter the day-to-day lexicon, but also to provide a defining metaphor for cultural life in the era of portable media. Action, accelerated and condensed to the point of simultaneity--and even schizophrenia--at the level of perception, communication, and interaction underpins the work on view in Multitasking: Synchronitat als kulturelle Praxis at the Neue Gesellschaft fur Bildende Kunst in Berlin through October 7th. Demonstrating the ubiquity of the act of doing many things at once, the NGBK has brought together work ranging from D.I.Y. digital media to politically charged performances by an equally far-reaching group of artists which includes Cory Arcangel, Constantin Luser, Bill Shackelford, and Adrian Piper. Two symposia on October 5th and 6th also draw on an appropriately wide-ranging group of disciplines, putting specialists in medicine and neurology in conversation with their counterparts in media studies and art history. The entire exhibition posits the phenomenon as the most overarching characteristic of a contemporary culture that fetishizes immediacy.

This Saturday night is the second Nuit Blanche here in Toronto and the all night arts event promises to be incredible. There are a number of exhibits and happenings that have piqued my interest but the project I am bent on investigating is White Line Light, an installation by Carsten Nicolai and Olaf Bender, two of the musicians behind the Raster-Noton imprint.

White Line Light explores fluorescent lighting as a means of reading sound and space. The brightness of the slender lighting rig modulates in sync with accompanying equally sparse audio. The official release for the installation describes it as follows:


The sound and light work of Carsten Nicolai and Olaf Bender explores the limitations of what we can see and hear. Taking this as a point of departure, white line light uses electricity as a conduit to identify, define and lend shape to the invisible and inaudible phenomena found in our midst, at the same time creating a palpable tension between the work itself and its unique architectural setting.