Since the early seventies the distinction between art and craft has been increasingly blurred. Material Pursuits, a new show at the University of Vermont's Flemming Museum, continues to call attention to this outdated debate. And while the premise of the show depends on this dichotomy the curators push far beyond this simplistic comparison. Yarn, fabric, and other materials usually the domain of the crafter, as well as the knitting, crocheting, and sewing with which these materials are held together are now, without a doubt, part of the contemporary artists arsenal. No longer the domain of the domestic, artists like Alicia Dworsky and Jason Middlebrook explore the potential of all potential materials to achieve their artistic ends. The art vs. craft debate may or may not be over, but for the artists in this show, it is inconsequential.

The Mechanics of Drawing

Complex parts of an impressive whole, each 'electro-mechanical installation' by Texas duo Jeff Shore and Jon Fisher produces a different component in an atmospheric installation. On view through October 6 in the exhibition 'Reel to Reel,' at Manhattan's Clementine gallery, some of the predominantly wall-mounted installations produce sound using automated instruments, such as a modified turntable and vinyl records. Others generate live video sequences using small mechanized surveillance cameras than pan and zoom over tiny automated sets resembling moving Hollywood miniatures hidden within masses of audio-visual equipment. While the audio emitted by some pieces is channeled to speakers and fills the gallery, the video feeds to a screening room at the center of the space. Watching the complete package and trying to trace each bit of sound and video to the element from which it originated is rewarding on its own, but a more subtle success of Shore and Fisher's work is the way that it treats the component cables in each of the installations. Rather than conventional bundles of cord or nests of cable, the wires powering the mechanical elements and carrying the feeds are spread out on the walls in measured, drawing-like abstractions.

A Tale of Two Cities 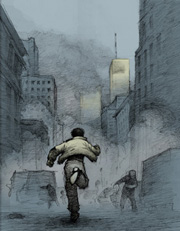 September 11th is a date forever etched in the mind of the world due to events of 2001 in New York City. Chile has its own historical associations with September 11th, as that was the day, twenty-two years earlier, when Salvador Allende was ousted from power--ushering in an era of fear and reprisal under the rule of Augusto Pinochet. In the new animated film, 9-11/9-11 artist Mel Chin weaves together these two 9-11s into a narrative of love, hope, power, and corruption, and creates a cautionary tale about the American foreign policy decisions that prop up and pull down international governments. Known for his multi-disciplinary practice, Chen uses film, photography, drawing, sculpture, and installation to create highly complex works that overtly blend art and social commentary. First published as a graphic novella by Chin in 2002, the artist had always envisioned the story as a film. The resulting international collaboration between Chilean animators and American filmmakers is a dark and beautiful hand-drawn film which highlights the shared pain and anxiety of this notorious date. The film premiers in New York and Santiago on September 11th, with additional screenings in Houston and Los Angeles.

At first glance Olia Lialina and Dragan Espenscheid's latest foray into the realm of digital folklore, Olia's and Dragan's Comparative History of Classic Animated GIFs and Glitter Graphics seems like a purely aesthetic comparison between the animated gif and glittery graphics. Upon deeper reflection however, this 'Comparative History' offers much more. As an addendum to artist and critic Lialina's Vernacular Web 2.0 (a continuation of her widely-read A Vernacular Web) it simply and beautifully illustrates that the amateur web is alive and well in the over-designed web 2.0. The question of good vs. bad design that is raised by these simple graphics was the subject of a subsequent and highly illuminating discussion which recently took place on the collaborative net art site, Nasty Nets. Now footnoted in Lialina's text, the discussion addressed issues of class, aesthetics, and the affectation of 'dirt style' graphics in both earnest and ironic instances. It is a most welcome dialogue about how issues of functionality, aesthetics, and class are reflected in contemporary web design--or un-design, as the case may be.

While scientists calculate the long-term prognostics for the health of the planet, artists continue to take the natural world--and its fate--as both a medium and a subject in their work. The Natural World Museum and the United Nations Environment Programme have gathered a group of 79 such examples in the volume Art in Action: Nature, Creativity, and Our Collective Future. Representative projects range from the crowd-pleasing site-specific work of Christo and Jeanne Claude to Olafur Eliasson's immersive provocations--just in time for a recently-opened mid-career survey of his work at SFMOMA--and the book is separated into sections that track artists rendering nature as everything from a fantasy Eden to a fallen wasteland of unchecked human development. The title makes the book's overall purpose clear. As much as it documents individual projects that engage with and manipulate ecology, the intent is a cumulative attempt to draw awareness to the ever-more fragile state of the planet.

Filmmaker Manu Luksch had a talk about and an installation of her project Manifesto for CCTV Filmmakers at ars electronica this year. Her work made vivid and almost tangible the relevance of the symposium's theme this year: Goodbye Privacy. The manifesto establishes rules, procedures, and identifies issues useful for filmmakers who want to the costs of creating a movie - by using images captured by CCTV cameras.

Her text follows closely the Data Protection Act (DPA) 1998 and related privacy legislation that gives the subjects of data records access to copies of the data. The manifesto can be adapted for different jurisdictions.

The artist demonstrated the validity of her manifesto with the movie Faceless. Sadly the movie was not shown at ars, only the Making of.

Under the DPA, one has the right to retrieve data which is held upon oneself, while the faces of anyone else captured on it have to be blacked out. She therefore claimed the as much CCTV footage of herself as she could and created a story set in the future, in the "faceless world" - with herself as the only woman with a face. No specialist equipment nor cameras were involved. The movie was made in London, the city which has the highest density of CCTV surveillance camera on Earth and the capital of a country that is getting increasingly Orwellian.

"My requests were more often than not replied to in an inadequate or uninformed way - the controllers had clearly not heard of the Data Protection Act," she told the BBC. She'd either get no reply - despite the law stating requests for images must be responded to in 40 days - or would be told no images could be provided. Others attempted to charge thousands of pounds for "post-production", even though the DPA says that ...

Two fall exhibitions opening this weekend at the Aldrich Contemporary Art Museum in Ridgefield, Connecticut, explore the foundations of perception in very different ways. As the first guest curator in a new biennial initiative to bring noted international exhibition-makers to the Aldrich, Austria-born Thomas Trummer has organized a show around the use of the human voice in visual art. Titled 'Voice & Void,' Trummer brings together works by roughly 15 artists--including John Cage, Janet Cardiff and George Bures Miller, Valie Export, and Julianne Swartz--who incorporate voice in the form of audio recordings or visual representations, and many of whom offer some kind of jarring perceptual shift between sight and sound. A panel discussion with the curator, several artists in the exhibition, and David Goldblatt, author of 'Art and Ventriloquism,' opens the show on September 16. While Trummer finds artists exploring sound and speech, a concurrent exhibition of Marti Cormand's paintings focuses on the visual, suggesting that the digital underpinnings of contemporary images have irrevocably colored our perceptions of the natural world. The winner of this year's Aldrich Prize for Emerging Artists, his forcefully romantic landscapes are interrupted by stray bands of abstraction calling to mind colorfully pixelated noise breaking up a digital photograph--or impossibly hard-edged angles interrupting otherwise organic-looking topographies. - William Hanley

In the summer of 2006, New York-based artist Ben Rubin presented a puzzle to the people of San Jose, California with Semaphore, a large-scale work installed atop Adobe's Almaden Tower. 'Semaphore' is comprised of four 'wheels' which can display four different positions (vertical, horizontal, left-leaning, and right-leaning--for a total of 256 possible configurations) and an audio track broadcast on AM radio. The challenge was to crack the code that 'Semaphore' had been broadcasting continually since August 7th, 2006. Merely a month after its launch the code was cracked by two research scientists, Mark Snesrud and Bob Mayo, but the result was only recently made public. It turns out that 'Semaphore' has been signaling the full text of The Crying of Lot 49, Thomas Pynchon's 1966 novel about a woman's attempt to unravel a mystery through an ambiguous set of clues. No longer a mystery, a fascinating account of how Snesrud and Mayo cracked the code is available on the 'Semaphore' website. 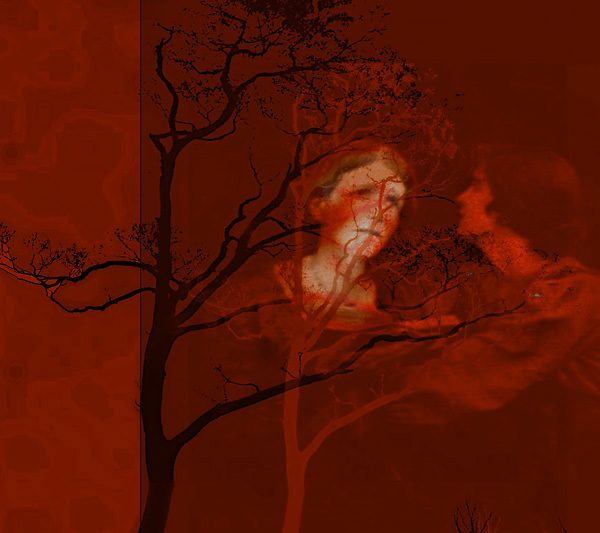 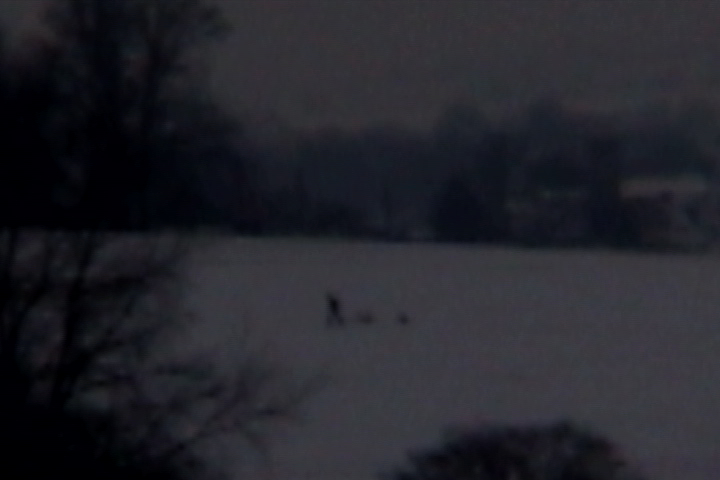 Two very different but complementary musings on death make up a well-curated double feature in the video lounge at Philadelphia's Vox Populi gallery--one of that city's many distinguished artist-run collectives--through September 29. Virgina-based Lydia Moyer contributes 'Paradise,' a study of a headline-making 2006 shooting in a secluded Amish community in Pennsylvania, in which a man from the neighboring community broke into a one-room schoolhouse and took the girls in the class as hostages before executing them. The families of the victims responded by consoling the gunman's relatives in what Moyer's work paints as an extraordinary act of forgiveness. In contrast to the violence setting Moyer's video in motion, Tennessee -based Hope Tucker's half of the program shows comparatively meditative work from her roughly 15-part 'Obituary Project.' Like a newspaper recounting the high points of a deceased person's life, Tucker's video series offers selective portraits of people, places, and objects in the process of fading out of existence. While they seem worlds apart in both style and subject, each work makes reference to video's history as a medium of both documentary and personal memory.