From September 14-29th the Staten Island Ferry, which transports commuters from Staten Island, New York to lower Manhattan, will perform a dual public service. Acting as both public transport and public broadcaster, the Ferry will be host to The FM Ferry Experiment. Organized by artists neuroTransmitter, the project will reach out to a broad audience. Those in the know can tune into WSIA 88.9 FM (or listen online at fmferryexperiment.net, free103point9.org, or wsia.fm) and others--like the thousands of daily commuters who utilize the ferry--may serendipitously be exposed to avant-garde music and sonic experiments during their twenty-five minute commute. With echoes of a pirate radio station, this offshore operation will be hosting live performances by artists such as Emily Jacir and Jamal Rayyis, and Alex Villar, as well as recordings of previous works by free103point9 artists, Paul Chan, Martha Rosler, and Scanner.

Trained as an architect, Japan-born, Los Angeles-based artist Yutaka Sone eventually turned to models rather than built structures as the focus of his practice. He creates miniature worlds where urbanist fantasies, manipulated landscapes, and cultural approaches to leisure materialize, but rather than using the cold and perfectly-scaled virtual material of computer rendering software, Sone has taken up a surprising variety of physical media. From his crystal snowflakes to acrylic paintings of ski resorts, each of his works has a tactile, handmade quality. The installation, It seems Like a Snow Leopard Island, is a self-contained environment of glaciers, running water, and tropical plants created on a scale that--consciously or not--reflects the reach of the artist's body. It is the centerpiece of the first UK exhibition of the artist's work, Secret for Snow Leopard: Yutaka Sone, which opens at London's

Video and performance work intersected early in their respective histories as artists used the increasingly inexpensive alternative to film to document events. But in 1972, one of the foundational convergences between the two media was also one of the most radical for both. Rather than using it as a documentary medium, Joan Jonas's work, Organic Honey's Visual Telepathy, was among the first to incorporate video into a live performance, pairing a group of closed-circuit displays with a series of mirrors. The combination had a doubling effect in the performance, famously creating an alter ego for the artist, but it also marked the first of many times that Jonas would use video to define the space in which her performances were enacted, a watershed move that did much to pave the way for the contemporary video installation. The first Spanish retrospective of Jonas's work, at the Museu d'Art Contemporani de Barcelona from September 20th through January 7th, brings together films, single-channel videos, drawings, and photographs that track her output from the 1960s to the present, but the show is focused around a series of four large-scale video installations that simultaneously evoke different stages in her career. They chart her contributions in thematic and formal threads rather than strict chronology, an appropriately hybrid presentation for an artist who routinely crosses media and has helped to forge at least one new one.

Individual in Relation to War

One of the most striking works on view at Documenta in Kassel, Germany, is '9 Scripts from a Nation at War.' Resulting from the collaboration between artists David Thorne, Katya Sander, Ashley Hunt, Sharon Hayes, and Andrea Geyer, the piece is a 10-channel video installation that examines the political, economical, and cultural issues surrounding the war in Iraq. In its current version, there are eight characters--a veteran, a student, a citizen, an actor, a blogger, a lawyer, a journalist, an interviewer--performed by actors and non-actors alike, that read to an audience a set of their own or other's words. As put by the artists in the project's website, these figures' cross narratives 'allow inquiry into the recording, reporting, learning, and understanding of the present moment, and to reflect upon how we account for ourselves within it.' The work is thus ‘structured around a central question: How does war construct specific positions for individuals to fill, enact, speak from, or resist?’ Some answers emerged last Monday during a panel with the artists promoted by the Vera List Center for Art and Politics at The New School in New York. As they once said, '9 Scripts from a Nation at War considers the processes by which we are positioned as certain kinds of 'individuals' in relation to war.' So they presented their vision of the world, insightfully elaborating on the ethical dimension of art practice and asking for an engagement of all of us--fellow artists and audience--with contemporary society’s issues. - Miguel Amado

every building on the sunset strip

Check out Joel's A9 Version
and the Ed Ruscha book

Surfing gains a whole new dimension with TurntablistPC by Danish artist Mogens Jacobsen. Featured in the WEBSCAPE exhibition at The Art Museum of West Sealand in Denmark, TurntablistPC reacts to online traffic by playing a record in the exhibition space every time a participating website is visited. Take part in this “global DJ” project and make a record spin miles away every time someone visits your website!

TurntablistPC is on show from September 21 - November 25, 2007. We need your participation! All you have to do is place a small piece of html code on your website. The code does not interfere in any way with the experience of your website. However, it WILL make the record spin physically miles away at the museum. Please find the code and further details below. [More....]

Down by the River

On the not so bucolic shores of the Gowanus Canal in Brooklyn, New York has emerged something beautiful: a gallery, meeting space, concert hall, and library called Proteus Gowanus. This multi-disciplinary space is utilized by multiple local non-profit organizations who collectively organize and create a variety of experiences based on a single theme. This year's theme, kicked-off this month, is 'Play.' Exhibitions, one-act operas, film screenings, and canal-side canoeing are only a few of the events and workshops planned for the upcoming season. The reading room and library provides access to publications by Ugly Duckling Press and Cabinet Magazine, and the 'Artist Book Library and Store' curated by Maddy Rosenberg also offers a quiet space for independent research. It is collaborative and interdisciplinary in the truest senses. Like its mythological namesake, Proteus Gowanus assumes different shapes and iterations, providing broad offerings to an equally broad audience. 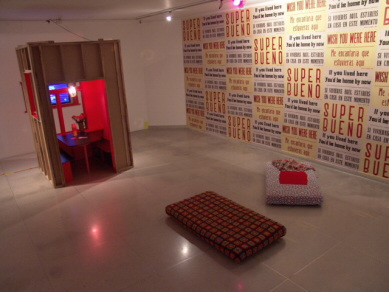 Everyone has that space in their home that functions on multiple levels--a place to drink coffee, read a book, check email, or sit with friends. For the Toronto/Vancouver collective Instant Coffee this space is a small kitchen nook in the Vancouver apartment of one of their members. An intensely social space, this particular nook has been central to the collective's process, plans, and practice for the past ten years. For their current show at Toronto's Mercer Union, Instant Coffee is attempting to recreate the nook's inspirational powers in a gallery setting. Four 'sculptures' in the exact same dimensions of the original nook occupy the gallery and will be the focus of a series of events, slide shows, and even a Sunday night dinner. Eliminating barriers between the studio and gallery, Instant Coffee's practice is consistently smart, inclusionary, and most importantly, fun. By generously offering their magical place to whoever can squeeze in, Instant Coffee gives us all a space at their table and the opportunity to be equally inspired.

Turn those dusty works in progress into fast cash! 'No gallery necessary' promises the latest project from New York's E-Flux (Electronic Flux Corporation). In what could end up being a parody of a faltering art market this fall, the online information service for visual arts institutions known for its widely-read email announcements is poised to open a storefront pawnshop to buy and sell art on Manhattan's Lower East Side. Beginning October 1st, the E-Flux PAWNSHOP will pay cash for works purchased from the public, and then on November 1st, the wares selected will go on sale alongside a reserve of work by internationally-known artists, including Francois Bucher, Aleksandra Mir, Lawrence Weiner, and Andrea Zittel. In true pawnshop fashion, the storefront will also offer faxes, xerox copies, internet access, phonecards, check cashing, and passport photos. Thanks to their portability, painting and other traditional media will most likely represent the majority of hawked possessions crossing the counter, but consider that a challenge to present work made in electronic or digital media for scrutiny and possibly a quick wad of cash.