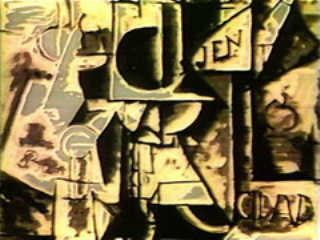 The film http://www.eai.org/eai/tape.jsp?itemID=2851">Le peintre cubiste, by French theorist and filmmaker Thierry Kuntzel, is a loose narrative about a man who perceives life through the multi-dimensional planes of a cubist painting. Using film, video and paint, this disconcerting exploration visually articulates Kuntzel's theoretical inquires into the construction of space and time in the visual world. Tonight (and again in three weeks), MOMA hosts In Memoriam: Thierry Kuntzel (1948

In fiction and in practice, machines that replicate human bodies tend to reproduce useful or desirable functions related to cognizance, physical labor, or sex, but for seven years, Wim Delvoye has chosen to duplicate a less alluring process. His series of 'Cloaca' machines mimic the whole of the human digestive system, eating, digesting, and yes, excreting in the gallery. He has produced seven versions of the machine to date, and they have been shown in cities around the world, where local restaurants donate leftovers and scraps to feed the insatiable works while they are in residence. From September 30th to January 6th, the exhibition Wim Delvoye: Cloaca 2000-2007 at the Casino Luxembourg Forum d'Art Contemporain offers the first overview of the complete series with all seven machines installed in its galleries--two of them actually performing the functions for which they were designed--along with original drawings, photographs, models, sealed bags of machine-produced excrement, and other materials related to the project. Heavily branded with a self-consciously glossy logo and released in generations ('Cloaca Original,' 'Super Cloaca,' 'Cloaca N

Embodying Sound: An interview with Bill Furlong on Audio Arts

Embodying Sound. An interview with Bill Furlong on Audio Arts: William Furlong (1944) belongs to the generation of British artists who developed a new concept of sculpture in the 1970s and 80s (Gilbert & George, Bruce McLean, Paul Richards etc.). Furlong's special contribution has been in the area of 'Sound Scuplture' and, with the founding of Audio Arts (together with Michael Archer) in 1973, he began a project of mapping the territory of contemporary art in a series of cassette editions. Since its inception in 1972, Audio Arts has grown to become the world's most comprehensive and coherently focused sound archive of artists' voices as well as sound art but also contains documents of important exhibitions, symposia and festivals. The cassette-magazine has been in continuous and regular publication for thirty-five years, with over twenty-five volumes of four issues each.

A small part of the vast Audio Arts archive is currently showing at Tate Britain and for the first time in U.K until the 27th of August. Four hours of recorded clips of interviews with main artist from 1973 to 2006 can be accessed here online by clicking on... Rather than calling them installations, Grisha Coleman refers to the elaborately constructed spaces in which she stages performance work as 'Action Stations.' Her distinction is fitting because they not only provide a site for the artist's own choreography, the environments also invite audiences to explore them independently. One element of the five-part project Echo :: System, the stations are the product of the artist's unique process of research and data interpretation. She collaborates with experts, including biologists, data specialists, architects, and designers, to collect information on distinct ecosystems and then recreate the natural ecology as an installation-based performance work. So far she has produced two of the five stations, creating 'The Abyss' on the side of a ravine and, most recently, 'The Desert' which recreated an arid expanse, complete with underground tunnels, using a combination of video installations and robotics. Her desert project premiered earlier this month in Pittsburgh, and plans are in the works for 'The Forest,' 'The Prarie,' and 'The Volcano' to complete the series. In the meantime, video and other documentation from previous performances are viewable on her Web site. With the media volume on climate catastrophes reaching as high as it is, her work is reminder that for all our calculations, the notion of an ideal ecology is tempered by so many human projections, and it is perhaps a provocation to be more attentive to the natural word while becoming more imaginative with our interpretations.

Rise to the Challenge

When it comes to visualizing abstract information, graphs and charts perform a thankless task. But lately it seems as though these hardworking spreadsheets, pie slices, and colored bars lack the appropriate sense of urgency necessary to convey the current state of the environment. Responding to this lack of truly inspiring imagery is Eyebeam's Eco-Vis Challenge. Announced during this year's Conflux festival, the challenge takes two parts: 'Eco Icons' and 'Eco Vis.' 'Icons' solicits simple graphics: logos, bumper stickers, graffiti and the like which can swiftly and effectively communicate their meaning. 'Eco Vis' likewise challenges artists and scientists to create more complex data visualization tools through which we can read ecological data. Are more provocative and engaging graphics the key to increasing public awareness of pressing ecological issues such as greenhouse gas emissions, food production practices, or recycling initiatives? Maybe, or maybe not. But hopefully the creative outputs of this challenge will, like all good art, inspire us to action.

The Topsy-Turvy Bus, lovingly known as Topsy, was designed to dramatically depict America's upside down budget priorities. Topsy is a brainchild of Ben Cohen, co-founder of Ben & Jerry's and noted artist Stefan Sagmeister, and was constructed by artist-mechanic Tom Kennedy.

'Our nation's spending priorities allow crumbling schools, millions of children with no health coverage, dependence on Middle East oil and deficits as far as you can see,' said Ben Cohen, president of the Priorities Campaign.

Topsy started out as a typical yellow school bus, but was fabricated with its twin welded upside down to the roof by Tom Kennedy and a crew of 10 artists who are no strangers to art-cars.

'I'm a guy who's been looking to use art cars for social change, and Kennedy is a guy who wants to make art cars for a living with some social purpose,' Cohen said. 'Clearly, we were both searching for each other.'

Kennedy is driving Topsy from California on a national tour to reach New Hampshire where Topsy will spend two months before rounding out the year in Iowa, all to flush out the spending priorities of presidential candidates.

Topsy also doubles as a mobile-theatre with an onboard video screen, which explains the federal budget in similarly entertaining fashion.

Originally posted on blog.bsing.net by Rhizome

[....] By Royal Appointment is a set of responsive chairs. As a person sits in the chair, an RGB colour sensor in the back reads the colour of their clothing. The colour LEDs on the back of the chair then gradually fade into the colour of the sitter. “This gives the individual sitting on it their own halo of light, or personal aura, evoking images of religious icons and kings”. Here are my photos.

“The shape of the chairs evoke the design of medieval thrones. The holes in the back of the chair gradually increase in size, making the chair at once solid yet insubstantial, as though it might be dissolving into the air. Strange and surreal, witty yet also spiritual, this is one of Waldemeyer's most arresting projects yet”.

More about this exhibition on dezeen. 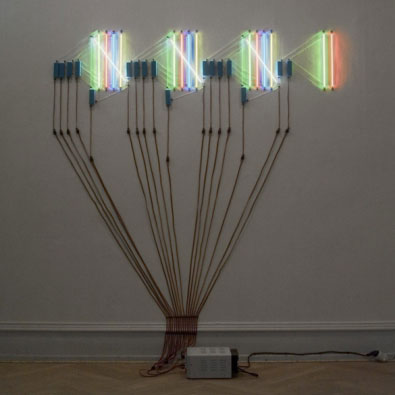 Protest, tourism, politics, and labor tend to figure at the center of Romania-born, Paris-based artist Mircea Cantor's short films, but for work that hinges on the display and distribution of power, they are far from didactic. In fact, their biggest success is the artist's engrossing ambiguity and lyrical images. One of the strongest examples of his style is the 2005 work 'Deeparture.' Incongruously released inside a white-cube art gallery, a wolf quietly stalks a deer in the otherwise empty space. The work contains an overt reference to Joseph Beuys and possibly Douglas Gordon, but it is also shot from an angle that allows the dance-like movement of the animals to appear maximally anthropomorphic, setting in motion a sweatily tense allegory. The homage to 'I Love America and America Loves Me' is on view in the United States capital through December 9th, where it continuously screens in the Hirshhorn Museum and Sculpture Garden's subterranean Black Box gallery. Cantor will give an artist talk and discuss the work on October 2nd, and on October 4th the museum will screen a series of his other films. The exhibition marks the beginning of a season with a film- and video-heavy schedule at the Hirshhorn that culminates in February with the first installment of a two-part exhibition titled 'The Cinema Effect: Illusion, Reality, and the Moving Image.' - William Hanley 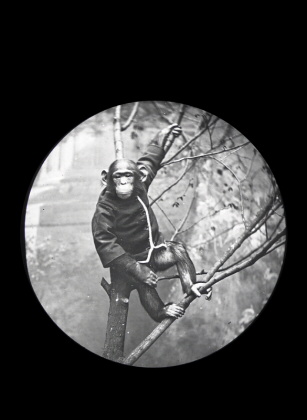 Mejor Vida Corp was a non-profit enterprise created by Mexican artist Minerva Cuevas that freely offered hard to procure items. Writing a grant proposal? Get a letter of recommendation from London's upscale Lisson Gallery through MVC. Want to visit MOMA but don't have the 2$0 entrance fee? MVC can get you student ID cards enabling access to the world's cultural institutions at a fraction of the cost. The MVC is only one example of how Cuevas uses new media to inhabit various personas, spaces, and conceptual frameworks. For her latest exhibition at Kunsthalle in Basel, Cuevas this time uses 'old media' to inhabit the worldview of the 19th century scientist. A monkey in a jacket sitting in a tree, meteorites from natural history museums, and found footage of behavioral psychology experiments are presented on antique optical devises and projectors. Titled Phenomenon, the show takes its name from Immanuel Kant's distinctions between phenomena ('beings of sense') and noumena ('things in themselves'). Putting us in the position of the colonial observer Cuevas uses these various viewing apparatuses to amplify not only what we see, but how we see.