a minimalist installation that acts as a light sign, an information carrier, & a light source at the same time. 2 digits of 7-segment display, formed using industrial fluorescent tubes, are suspended from the ceiling.

as a "display", the installation is used to show the current time in minutes. at the same time, as a light installation, it is the only light source inside the exhibition space & therefore it serves as the necessary pragmatic lighting source. as the displayed information is changing every minute, the over all light intensity is kept on a constant level during all times, thus the appearance of the exhibition space is changed subtly but constantly.

watch a timelapse movie after the break. Originally posted on ***/* by Rhizome

Timed as a prelude to its southern neighbors' 01SJ Festival, Berkeley Big Bang 08 presents three days of events and an exhibition of new media art at BAM/PFA and the Berkeley Center for New Media. Beginning June 1st, attendees can bone up on Lynn Hershman Leeson's early period with an eight-hour marathon of her experimental videos made from 1977-94, view Jim Campbell's wall-sized Home Movies (2006-Present), which depicts images from found family films via the barely-legible resolution of an LED curtain, or contemplate counter-surveillance with artist Trevor Paglan's The Other Night Sky (2007), a science-museum-style installation plotting the locations of spy satellites. Bay Area artist Scott Snibbe's Falling Girl (2008) will appear on the outside of the Berkeley Art Museum building, a silhouette animation depicting the dreamily slow descent of a girl from a skyscraper. Other events include a two-day symposium with artists and academics, and Black Cloud / Red Eye, an immersive alternative reality game by Greg Niemeyer. - Ed Halter

Tools of the Trade: Nick Hasty, The EM Brace

In this new series, Rhizome invites artists to explain the nuts and bolts of their work. Our first contribution comes from recent ITP graduate and Rhizome's dynamo former Technology Assistant Nick Hasty. Here, Hasty describes his project The EM Brace.

The EM Brace is a wearable device for physically engaging with electromagnetic radiation emitted by the consumer and communication technologies that constantly permeate our bodies. The device attunes the body to the presence of electromagnetic frequencies through amplifying these frequencies and turning them into powerful sound waves that vibrate the wearer.

The EM Brace consists of a metallic enclosure that is worn on the back (fig a) attached to a pair of antenna gloves that fit on the hands (fig b).

Extending from the metallic enclosure are four flexible metal arms which wrap around the ribcage. The enclosure and arms are secured to the body via four straps that connect at the chest (fig c) through a four point harness. Putting on and using the EM Brace has been described as a mix of being strapped into a roller-coaster, scuba diving, and getting a massage.

'See Something, Say Something' at the Kitchen

Still from 'Secrecy,' 2008. Directed by Peter Galison and Robb Moss

SEE SOMETHING, SAY SOMETHING: STRATEGIES OF COUNTER-SURVEILLANCE
Saturday, May 31 - 5 pm

In conjunction with the exhibition 'For Reasons of State', guest curators Angelique Campens, Erica Cooke, and Steven Lam will hold a panel discussion on the impact of governmental and corporate secrecy on life in our contemporary society and its manifestations in visual culture. The phrase "See Something, Say Something," spreads the logic that citizens will benefit from policing each other. This panel, however, extends accountability beyond the gaze of the citizen-spy to also include the state. Who is responsible for withholding and distributing information? What type of information becomes de/classified? How can we take (more) control of our public access to knowledge? 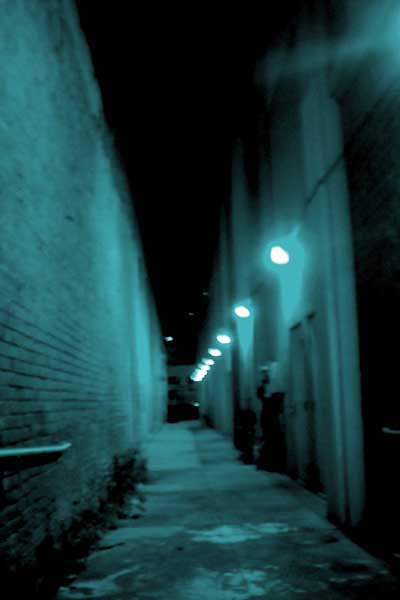 Neighborhood Public Radio joins forces with The Illuminated Corridor, a nomadic public art installation, to relight a Manhattan civic space with dozens of projections of original, experimental film and video onto plaza surfaces and selected facades. This will be accompanied by a performance of watchable radio. Saturday, May 31, 2008, 8:53pm - 11pm. Gansevoort Street between Hudson and 9th Avenue, NYC . Bring an fm radio.

"A Practical Demonstration" is an exercise in suspended orbits, suspended disbelief and circular group formations. This two part project consists of a circle of local amateur videographers documenting a stuntman leaping from Machine Project's 2nd story window and another circle of international participants documenting the sun for 24 hours as the earth spins in its daily orbit.

Part One: On Sunday July 6th a stuntman will leap from Machine Project's 2nd story window. We would like to invite folks to attend the leap, with a video camera (everyone's got one nowadays, we can probably even supply you with one if you don't). The videographers will be arranged in a large circle on the ground around the spot where the body will fall. They will document the leap and then turn over their video footage (tapes to be provided, unless you want to donate one). This footage will then be edited to create a very clumsy "Matrix" effect that suspends the stuntperson in mid-air with a 360 degree pan. We would like to get at least 40 people to film, so tell a friend.

(Contact us here if you know you'll be attending and videotaping, and we'll send you more info and updates: machine{AT}machineproject.com)

Part Two: On Friday July 11th Machine Project will be presenting the edited stunt footage with a live video companion piece. For one 24-hour period an international circle of people will chase the sun around the earth. This would happen by having a participant in every time zone point their computer camera to the sky between 11:30am and 12:30pm, thus a human chain, one timezone handing off to the next, following the sun around the globe perpetually holding it aloft and feeding back "mid-day" to Machine ...