In an age of celebutante endorsements and reality television, one thing is clear: some people get to be famous simply for being famous, while other more talented or interesting people are destined to maintain a lower profile. Artist Harrell Fletcher's new web-based project, Some People, addresses this scenario. Like his previous online collaboration with artist Miranda July, entitled Learning To Love You More, this site offers internet users of all backgrounds and skillsets the opportunity to contribute personal content to the site--content which will then be exhibited in a variety of online and offline contexts. The focus of Some People is on the untold stories of heretofore undiscovered personalities. Fletcher encourages users to "identify someone that you find engaging and compelling, a person that you would like to get to know, or know better, someone who does something interesting with their life but who is not well known--at least not outside of their own community," and offers instructions for creating and uploading documentary videos about these people. The site's functionality (which is the product of collaboration with designer Yuri Ono and programmer Christopher Berry) and Fletcher's statements shoot to keep an open mind about what constitutes a "documentary" and the types of footage, images, or sounds that can be included. While encouraging a broad approach, Fletcher also dissuades documentarians from crafting an homage instead of a more literal image of their chosen person. Site visitors can search for the artists and their subjects by name, upload dates, or tags. The project has only been up a few weeks and already tags include "casinos," "coke dealer," "eagle scout," and, of course, "stars"! - Marisa Olson

Image Credit: Chris and Pat Christopher from Some People, 2008

Nanny (2006) by John Delk
For Nanny I have devised a receiver with the capacity to pick up signals from hidden video cameras used to spy on neighbors, nannies, husbands and wives, or to survey backyards and baby cribs. I drive around the suburbs and collect material. This is a work in progress.

From Alpha to Omega 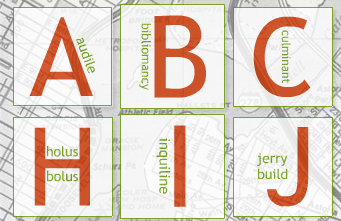 Artists are often credited with inventing new languages, but of course the building blocks of these code hacks, if you will, are the letters of the alphabet. A new online exhibition entitled "Abecedarium:NYC" takes the Modern English alphabet as its starting point. Curated by Susan Agliata and Lynne Sachs and appropriately hosted by the New York Public Library, that longstanding database of the alphanumeric, the show invited artists to imagine readings of the city of New York and its boroughs, based on their interpretation of a word beginning with their assigned letter. The twenty-six final pieces construct overlapping narratives about the city and its denizens, as portrayed in interactive maps, videos, and audio works. Each entry takes a different approach as to the genre of story told, ranging from noirish mysteries to nonfiction historiographies to humorous character studies. Start with your favorite letter and see if you're able to resist the other twenty-five. - Marisa Olson

Cine City: Mark Leckey's "Cinema in the Round" 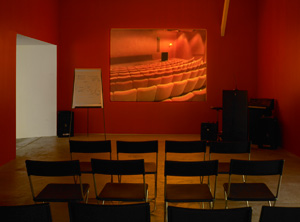 Artworlders turned out in droves at the Guggenheim this past Wednesday for Mark Leckey's performance-cum-lecture, "Cinema in the Round," the penultimate event in Creative Time's Hey Hey Glossolalia series. Pairing a handsome suit with his blonde, surfer shag, Leckey looked every bit the irreverent orator as he assumed the lectern in the museum auditorium and delivered a refreshingly unorthodox reading of art and cinema history. Of particular importance was the question of how something cinematic may move from a state of "pure horizontality" to that of "pure verticality," which, for Leckey, was analogous to asking how a cinematic image may become an object, sculpture, monument or "beast." James Cameron's Titanic was one of many exemplars of this process, described by Leckey as a "time-travel film" that compressed "the bookends of the 20th century" (the materiality of early industrial manufacturing, the immateriality of late software production and 3D design) and torqued this resulting hybrid around one deceptively small iceberg. At other moments, Leckey's interest in exploring the sculptural and material language of cinema led to his relating Philip Guston's "ham-fisted, meat-and-potatoes" paintings and Georg Baselitz's still-lives of severed feet to skitterish, early Felix the Cat animations and the mass-agglutination aesthetics of music video production company Encylopedia Pictura. Such eclectic sampling would seem haphazard in other hands, but Leckey's familiarity with his source material bolstered its expressive content, and the narrational pliancy he brought to the lecture's structure proved thoughtful and engaging. - Tyler Coburn

Public and private spheres coalesce in "*my [public] space*," a new exhibition at Netherlands Media Art Institute, in Amsterdam. The group show, including artists Jill Magid, Hasan Elahi and Marisa Olson, builds upon the previous exhibition at the Institute, "Territorial Phantom," which addressed "the occupations of and claims to space by corporations, organizations or countries." This iteration finds artists navigating the increasingly ill-defined boundaries of public and private space, with a particular view onto new opportunities for personal agency and self-definition. In the video Stealing Beauty (2008), for example, artist Guy Ben-Ner and his obliging co-conspirators (wife and two kids) stage a series of guerilla, sitcom-style performances throughout IKEA's interiors. The family acts out a full swathe of domestic events in living spaces built to fit a design department's imagination, and the surreality of this juxtaposition is underscored by a soundtrack of interference -- gaping passersby, store announcements and, occasionally, IKEA security personnel. Ben-Ner's desire to dissolve into coffee-table catalogue normalcy, in other words, is amusingly and poignantly complicated at every turn. Also notable are the Synthetic Performances (2007) of Eva and Franco Mattes (a.k.a 0100101110101101.ORG), which entail the artists' avatars reenacting seminal works of performance art in Second Life. The most successful of these recreated performances emphasize the body, such as Chris Burden's Shoot (1971) and Marina Abramovic and Ulay's Imponderabilia (1977), in which the naked artists lined the sides of a narrow entranceway, forcing visitors into physical contact as they passed. While a certain psychological discomfiture remains, for the Second Life visitor, the elision of the original performance's visceral content can be taken as a broader critique of the diminishing role of our physical bodies in the emergent, predominantly virtual twenty-first century public. - Tyler Coburn

We Heart Our VCRs

It's been said that necessity is the mother of all invention. That is, that true innovators were often responding to a lack of materials in crafting their art. This seems particularly true in the field of filmic media, where art history offers us so many examples, ranging from the Soviet KINO school's use of rearranged bits of paper to fine-tune the practice of montage to Britain's early-80s Scratch Video movement. The latter is the subject of an exhibition at London's Seventeen Gallery, May 28th-June 28th. "SCRATCH" presents work by intimate colleagues George Barber, The Duvet Brothers, Goldbacher & Flitcroft, and Gorilla Tapes, each of whom participated in this movement that involved sourcing material directly from existing broadcasts and other moving images sources, and often reprocessing them with what were then the latest in video editing techniques and tools. While all of the these artists' work responds largely to the new creative possibilities afforded by the birth of the VCR, Seventeen points out that they took this work in two distinct directions: politics and aesthetics. (Not that the two are mutually exclusive!) The Duvet Brothers and Gorilla Tapes directly engaged the Thatcher/Reagan new world order of conservativism and the ongoing issues in Northern Ireland with an anti-establishment ethos that marked all of their works. Their peers in the show explored visual styles ranging from dreams to pop music videos, imbuing their sources with rhythm, pulse, and a new life. If you're in the area, come check-out this often under-recognized work whose copious imitators, in the last two decades, are a testament to its influence and staying power. - Marisa Olson


"AutoTrace #1 (Full Fathom Five)" was created by tracing a reproduction of Jackson Pollack's painting "Full Fathom Five" with a standard graphics editing program. The tracing happens automatically with minimal input from the artist.

Angelo Plessas is an artist based in Athens, Greece and a professed member of Neen, an art movement whose manifesto declares,"Computing is to Neen as what fantasy was to surrealism and freedom to communism. It creates its context, but it can also be postponed...Neenstars find their pleasure in the in-between actions. Neen is about losing time on different operating systems." Following this philosophy, Plessas' interactive flash animations "lose time" by requiring the user to activate seemingly pointless and absurd scenarios-- whether it be feeding snakes to Medusa's head or balancing bubbles on a scale with a mustache.

Below are a few of my favorite projects by Plessas. Click through to view.

Plink Jet, developed by Lesley Flanigan and Andrew Doro, is a robotic musical instrument made from scavenged ink jet printers. The mechanical parts of four printers are diverted from their original function, re-contextualizing the relatively high-tech mechanisms of this typically banal appliance into a ludic musical performance. Motorized, sliding ink cartridges and plucking mechanisms play four guitar strings by manipulating both pitch and strumming patterns like human hands fingering, fretting, and strumming a guitar. Plink Jet is designed to play itself, be played, or both. The result is an optionally collaborative performance between both the user and Plink Jet, with the user choosing varying levels of manual control over the different cartridges (fretting) and string plucking speeds (strumming).

The repurposing of consumer technology is a growing trend for artists and technologists in the DIY genre exploring circuit bending, hardware hacking and retro-engineering. Artists who have used the mechanics of printers for producing sound include Paul Slocum with his dot matrix printer and Eric Singer’s scanner-inspired musical instrument, GuitarBot. Inside an ordinary ink jet printer are the same toy-like, clockwork mechanisms that have delighted people and sparked imaginations for centuries. In the creation of Plink Jet, Flanigan and Doro have investigated how human improvisation can interact with these mechanical forms. Plink Jet transforms the predicable function of a printer into a unique and irreproducible performance.