Raising the Bar in Singapore

Every two years, the International Symposium on Electronic Art (ISEA) lands in a different world city, drawing thousands of new media scholars and artists together and engaging the local community. Two rounds ago, in 2004, ISEA started on a cruise ship that sailed (ok, partied) from Helsinki to Stockholm before delivering participants in Tallin, Estonia. In 2006 ISEA came to San Jose, California, where it both gelled and collided with the Silicon Valley scene, inaugurating the annual Zero1 festival. This year the events leapt across the Pacific to Singapore, a small country with a huge media culture. From July 25th-August 3rd, the "world's premier media arts event for the critical discussion and showcase of creative productions applying new technologies in interactive and digital media" will present a range of exhibitions and public programs on five official themes: Locating media, Wiki Wiki, Ludic Interfaces, Reality Jam, and Border Transmissions. The panels and keynotes within this theme--delivered by many of the biggest names in the field--consider the current state of new media production and reception, and cast an eye toward the role of Pacific Rim participants in driving this field. A cornerstone of the festival is the main exhibition, installed at the National Museum of Singapore and called simply "ISEA2008 Juried Exhibition." This year's show provides a glimpse into contemporary media art practices not only in the work selected, but in the process of it's organization. The exhibit includes sixteen artworks, many of which were made by international collaborative teams, that were curated via a competitive open call. The selected artists were invited to Singapore for residencies, where they began to flesh-out their ideas and work in new media, technology, and science labs on the campus of the National University of Singapore. The result is a collection of works ...

Contrary to what its title might suggest to the bawdier of readers, CANADA's "Journey to the Center of Uranus" is not actually an exhibition's worth of butt jokes. Instead, Uranus becomes a multivalent center to this spirited but uneven group show: the divine manifestation of the heavens, in Greek mythology, and the name later given to the seventh planet from the sun. Each of the artists (or "cosmonauts," a term the press release lovingly ascribes) reaches beyond the immanent realm and into the mysteries of the cosmos, cyberspace and biology, yet offset the loftiness of their subjects with ingenious, often handmade objects and artifacts. Eunice Kim's Untitled (2008) is a standout, its string zig-zagging throughout both rooms of the gallery and accumulating, on its route, Calder-esque wire mobiles, cloth sculptures, a brown paper bag man, a disco ball and other bits and bobs. Suspended a few feet below the gallery ceiling, Kim's work turns small, everyday gestures into a magically inventive constellation. Other notables include Willy Le Maitre's stereographic take on the Ediacaran geological period (After the Edia caran, 2008), which looks like the love-child of Nam June Paik's Global Groove and the work of Takeshi Murata; and Paul Slocum's Baldessari-for-the-new-millenium piece, One frame of a GIF animation printed and hung about a videoprojection of the same animation scaled to approximately 66% (2008), which follows its title to a tee, but is no less elegant for that fact. - Tyler Coburn

Image: Paul Slocum, One frame of a GIF animation printed and hung about a videoprojection of the same animation scaled to approximately 66%, 2008 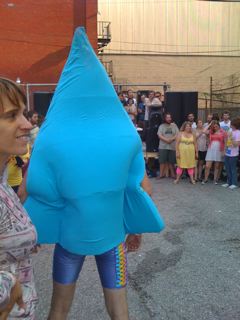 Scratch the surface of Baltimore, an American city best known for high homicide rates and crab cakes, and you might get a whiff of the schizo, silly perversion that camp auteur John Waters famously captured in celluloid. A case in point is the music festival Whartscape, the Wham City art collective's freak-power counterpoint to the city of Baltimore's annual crafts 'n corndogs festival, Artscape.

In this, the festival's third year of operation, Whartscape has adopted a wider angle lens, expanding the lineup to 77 bands, playing over 4 days and nights, in legally secured venues. This expansion of the festival can most likely be seen as a result of the "Baltimore's got a cool scene" meme that has spread as far into the mainstream as Rolling Stone Magazine who declared that, indeed, Baltimore does the have the "Best Scene" (of 2008, anyway). Given the hype, it might seem tempting to enter into this "scene" with a skeptical eye, however, this year's Whartscape still felt like a somewhat unexploited, cozy family affair. 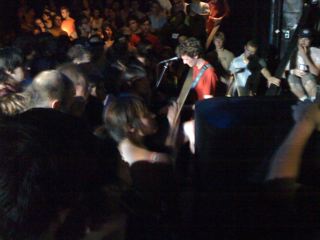 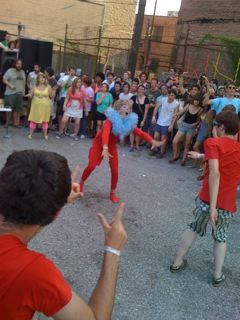 The following continues the series of paired interviews with artists carried out here and at This Too Will Pass. Leah Beeferman is a young artist who recently had the opportunity to show her work at Philadelphia's SPACE 1026. SPACE turned 10 years old this year, and it's one of the focal points for the alternative art making and exhibition culture that's really starting to take on a life of its own in the City of Brotherly Love.

Leah Beeferman likes to imagine the internal lives of architecture and buildings. Her show, Orbital Debris, with Brooke Inman, here in Philadelphia, primarily exhibited work from a series she called "Imagining the Universe as seen by a Building used to track Orbital Debris."

While her work shows a great interest in technology, she does it all by hand. She talks more about what she's trying to achieve below. If this isn't enough, you can find more about the inner workings of Ms. Beeferman in the Exterview at This Too Will Pass.

Launch of N.E.W.S at ISEA

n.e.w.s. is a horizontally-organised, cumulative knowledge-based website for contemporary art and new media framed by curatorial contributions from around the globe, bringing together voices and images from North, East, West and South. n.e.w.s. reflects geographic diversity and facilitates a framework for collaboration, content and visions of change outside the normal parameters of the established art world networks.

Benjamin Cohen, Dylan J. Gauthier, and Stephan von Muehlen's "Mare Liberum" is in free103point9's "Off the Grid" show up through September at the Neuberger Museum in Westchester County, New York. This workshop, building the boat, was filmed over the course of a single day at the Neuberger Museum, in Purchase, New York. Part of a series of workshops and performances for the exhibition "Off the Grid" April 2, 2008 at the Museum. "Off The Grid" features contemporary works which formally and/or conceptually challenge conventional and commercial infrastructures. Installations include works by Matt Bua; Brett Bloom; Benjamin Cohen, Dylan J. Gauthier, and Stephan von Muehlen; EcoArtTech: Christine Nadir and Cary Peppermint; eteam; Max Goldfarb; Louis Hock; Nina Katchadourian; Kristin Lucas; Joe McKay; Trevor Paglen; Seth Weiner; and Bart Woodstrup. 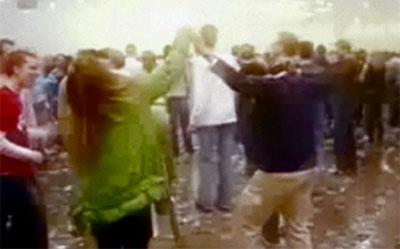 Currently on view in an off-beat neighborhood in the off-beat art city of Louisville, Kentucky, is an exhibition of nine very up-and-coming media artists: Justin Clark, Petra Cortright, Thomas Galloway, Michael Guidetti, Jacolby Satterwhite, Hayley Silverman, Will Simpson, Dan Wickerham, and Damon Zucconi. Curated by artist Ilia Ovechkin, co-founder of Loshadka--a group net art site of the "surf club" variety, the show (open at Plexus Contemporary through August 8th) includes many artists who work primarily on the internet or with web-derived materials and themes, but whose work for the show demonstrates a fluidity between online and offline forms. "The common thread between these artists is that they are all comfortable with being multidisciplinary and working across media," Ovechkin said, in Lousville's local Velocity Weekly, "but the conversation becomes even more interesting when you focus on the individual works and the topics they address." The familiar title of the Weekly piece was "The Medium is the Message," but Ovechkin seems eager to zoom further-in on the works, not prioritizing their form over their content. For instance, Jacolby Satterwhite's video, Model It, in which the artist is seen vogueing in front of the camera, might initially read as just another artist's response to YouTube culture, but the song in the piece was written by his mentally-ill mother and acts as a sort of empowerment anthem backdrop for Satterwhite's bigger commentary on "African American male patriarchy, sexuality, and material culture." Damon Zucconi's video Slow Rave (last minutes of trance energy), effects a spiritual experience on a well-lit dance floor by slowing down found footage of dancers at a rave. As the subjects gesture slowly and silently, the viewer identifies with the trance-like feeling they must be experiencing on a higher level. The binary "on" of a strobe ...

spectra [amsterdam] is artist and composer Ryoji Ikeda's commission for dream amsterdam 2008; his first project for a public space and his first large-scale work pushing the creative possibilities of light to its utmost extremes. Selected architectural features in industrial, civic and open public spaces emanate blinding white light for several hours every evening, in an unearthly, unforgettable experience. Visitors navigate between the sites following a map that connects the distant points of a visceral urban constellation. Ikeda is an internationally acclaimed composer and sound artist who creates highly technologised installations that play with human perception, in concerts, installations and recordings integrating sound, acoustics and sublime imagery derived from pure mathematics and the endless sea of data in the world.

"A talk by Jake Elliott from "The Last Hope" - Hackers on Planet Earth 2008. This talk presents a short history of electronic art by illustrating connections between artists, activists, and hackers. The connections and histories presented include: the demoscene and its origins in software piracy; video and conceptual artists in the 1970s and their activist work; contemporary artists working with circuit bending and other detournements of modern technologies; the Chicago "dirty new media" community; contemporary artists, hackers, and activists creating software and electronic art with a punk/anticapitalist ethos. Excerpts of work from these different artists and communities are screened and discussed. http://dai5ychain.net/jake/ http://criticalartware.net/ http://4rtcr4x0rz.com/"

Originally posted on MediaArtHistories by Rhizome