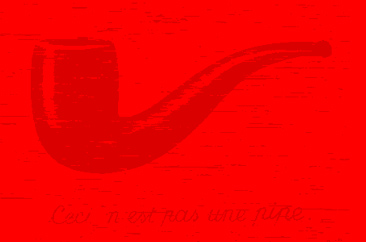 "This Is Not A Loop" by Niall Flaherty. Sound loop digitally generated from Rene Magritte's painting "The Betrayal of Images", 1929.

The phrase "network of networks" is one we've found used frequently on Rhizome, especially over the past year. As the conditions of network culture become more pervasive, and more conducive to collaboration, there is an obvious draw to this concept. Artists are creating networks of networks as further means of working together, sharing resources, and promoting each others' work, but there is something more to this notion. In the early days of net art, the work was highly self-reflexive of network conditions, and many of its practitioners were drawn to the borderlessness of the net, as opposed to the rigidity of political borders. In subsequent years, those borders loosened a bit (at least in Europe, with the expansion of the EU), and network conventions became an almost tired subject of exploitation. But this turn in the tide has led to a co-mingling of the notions of networks and social sculpture, so that these social networks of creative people have become artworks in their own right. This seems to be the case with the HACK.Fem.EAST group of artists, programmers, and activists whose work is currently on view at Berlin's Kunstraum Kreuzberg. On June 9th, two of the group's leaders, Tatiana Bazzichelli and Gaia Novati, will present a creative walking tour and "apertivo" of the show. The event happens in conjunction with WOOLOO.org's New Life Berlin Festival, which counts among its aims the goal of fostering connections between artists and considering the creative and cultural impacts of change and globalization upon cities like Berlin. - Marisa Olson

As if taking a one-man stand against the alleged decline of bibliophilia in the digital age, Charles Broskoski read 356 books in 400 days, ending his own personal Reading Olympics in early 2008. If that doesn't sound grueling enough to you ADHD types, consider this: the books he perused were a collection of O'Reilly tech-guide e-books downloaded as a single torrent in late 2006: fat tomes with such alluring titles as Linux Device Drivers, XSLT Cookbook, Essential System Administration and ASP.NET in a Nutshell. Conceiving the daunting task as an endurance performance entitled Computer Skills, Broskoski took notes on every book he read, and later posted them to his website in both .txt and .pdf formats. Perhaps inevitably, his notes begin as detailed commentaries, but later devolve into sketchy exasperation and sideways minutia: "the photo for the chapter on DVDs is an image of a title screen for a movie called El Masko" reads one of only three comments Broskoski made in response to Mac OS X: The Missing Manual, Second Edition by David Pogue, thumbed through as volume number 212. Last month, for the Parsons School of Design show at the Chelsea Art Museum, Broskoski mounted further physical evidence: 356 physical copies of the books he read, happily donated to the show by the publisher. Seeing the multicolored monolith of paperbacks assembled together makes for a humbling monument to the sheer amount of information available online. Broskoski's super-sized 400-day book-binge, after all, comprises only an infinitesimally small portion of the networked era's ever-expanding universal library. -- Ed Halter

The Social In Question: Review of Futuresonic 08

As I enter the conference space, I wonder if I'll be tempted to update my Facebook status constantly at Futuresonic '08. Many of my Facebook friends are here, but still I can't resist tapping on my EeePC from time to time: Michelle is happy in Manchester. Michelle has an idea. Michelle is in love with Dirt Party! Michelle is taking a leisurely pace.

Right now, I suppose I should change my status to: Michelle is writing a review of Futuresonic 08, a five-day festival of art, music, and ideas in Manchester, UK. Futuresonic is an established festival that often showcases emerging issues in creative industries, and this year's topic "The Social" took form both online and offline, and sometimes in between.

A new show collaboratively presented by ZKM, in Karlsruhe, and tank.tv, Tank Magazine's online film and video gallery, works to question a dubious tendency in the art world. The citation of an artist's nationality is a common tactic in both the historicization of their work and in its branding. (Think of the "Young British Artist" meme as an example par excellence.) Art exhibitions are posited as prime perpetuators of these citations and the organizers of "Vetrautes Terrain" argue that this act can have several negative ramifications. Taking the example of "German Art," they argue that the identity markings invested by national political borders are not always the identities artists would choose to adopt and given the diversity of peoples to be found in any nation, this fact alone does not determine the nature of an artist's work--and does not homogenously overdetermine all artists of single nations in the same way. In fact, these blanket categorizations often undermine an artist's ability to work against the grain in expressing dissent. This cookie cutter designation also shrugs-off the important work of producing the real art criticism that engages and activates the questions raised by artists in their work. "Vertrautes Terrain: Contemporary Art in/about Germany" includes over 70 German and international artists directly or more subtly addressing the question of who or what the ever-evolving country of Germany is. - Marisa Olson

Originally posted on raquel_meyers by Rhizome

This week the Museum of the Moving Image launched Moving Image Source, a new online journal and hub for moving image criticism, discussion, and research. Check the website for articles by leading critics in the field (including Rhizome's own Ed Halter), a calendar of international events, as well as a valuable research guide containing a diverse range of links, such as the Machinima Archive, the British Artists' Moving Image Database, and the Prelinger Library, to name only a few.

a physical info-sculpture that displays news stories from the Internet in real time. a snake-like LED display coming in & out a garbage bin shows the RSS feeds from various news channels. the news is seemingly thrown away into the giant recycle bin in order to be updated at the next moment. the project "Urgently!" metaphorically represents digital data, an endless flow of information that is updated every second & gets obsolete & trashed immediately after that.

Making the Most of Negative Space 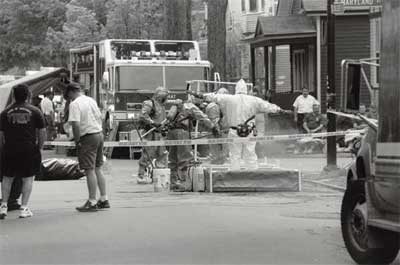 By now, many Rhizome readers are familiar with the ordeal endured by Steve Kurtz, a member of the tactical media collective Critical Art Ensemble dubiously charged with "mail fraud" (when bioterrorism allegations didn't stick) following the sudden death of his wife. More details on the case, which resonated in ripples throughout the art world and raised many important questions about free speech rights, can be found on the CAE Defense Fund website. Now CAE and their frequent collaborators, the Institute for Applied Autonomy, are teaming-up in an exhibition at Hallwalls Contemporary Art Center, in Kurtz's city of residence, Buffalo, NY. The show, entitled "Seized," revolves around the materials taken by the FBI in their occupation and search of Kurtz's home. The negative spaces left behind by these absent books, art works, and other seemingly innocuous objects are filled by the garbage the FBI left behind. The show will also include the works in which CAE was engaged at the time, and which came under Homeland scrutiny. These include Free Range Grain, Molecular Invasion, and GenTerra, all of which explore the systems of scientific research as models for discussing the impact of biotechnology on our food, our bodies, and ironically, our security. The exhibition will be open June 7-July 13 and, like the negative spaces filled by government garbage in the exhibited documentation, the show offers an opportunity to fill the hole punched by this unfortunate series of events with critical conversation. - Marisa Olson