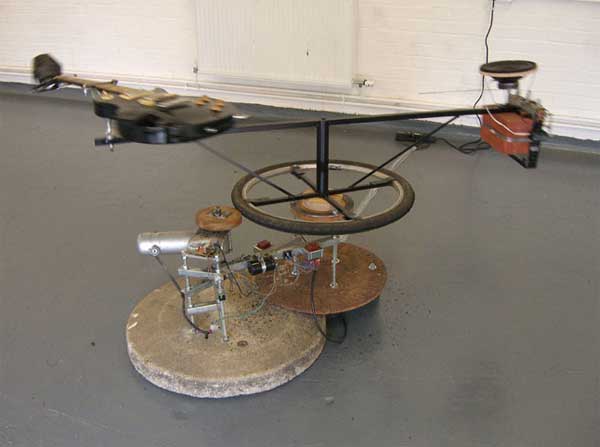 A kinetic sound sculpture for two electric guitars and one electric bass. Taking its name from the classic rock combination of guitar, bass and drums, this fairground-esque installation invites the audience to navigate the space around and between the instrument-machine band members and wander through their perpetually aleatoric song.


In his work, Saâdane Afif adopts strategies from the fields of art and music, for example the method of appropriation, in order to critically explore the concepts of interpretation and repetition. Among other elements, his room installations combine song texts and pop music with pictures, personal comments and objects which have been pre-fabricated or already exist. Afif reflects artistic authorship and how the art system works.

Saâdane Afif has arranged thirteen black guitars and amps in a room. Lyrics (2007) creates sound to accompany a sculpture. The guitars are orchestrated from afar by a computer and also altered conceptually. Afif has been commissioning writer friends to write Lyrics to one of his works since 2004. The Lyrics thus provide a personal perspective on each work and are thus interpreted once more by the musician’s free-form improvisations. 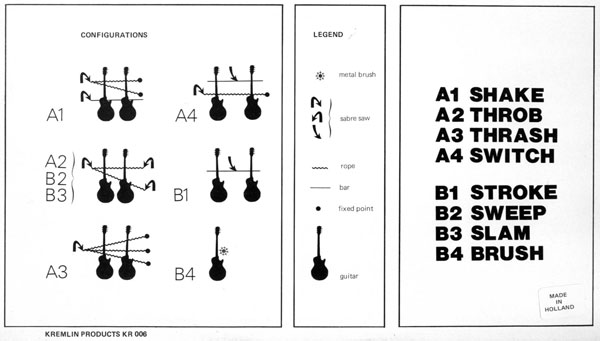 This record presents music emerging out of simple mechanical processes. The machine configurations employed are shown in the accompanying diagrams. Most of the tracks use uniformly moving sabre saws with ropes or flexible metal rods attached. The standing waves created in these attachments hit the strings of electric guitars. On track B4, a rotating metal brush operates directly on a guitar string. All pieces are autonomously played by the machines, without human control or interference.

UbuWeb has recently uploaded this album, you can listen to it here.

from here to ear (2008) - Céleste Boursier-Mougenot

This installation, whose principle was conceived in the early 1990s, transforms the gallery into an aviary where visitors share the space with a few dozen birds, who, by landing on electric guitars, create a musical piece.

Millie Niss, net artist and editor of Sporkworld, passed away; her work and life is being remembered by artists and colleagues here. Excerpt from Marc Garrett's contribution below.

Millie's work for me, has always reached beyond the surface of things. Somehow in her work, she has managed to communicate an essence of her character and her varied intentions very successfully. There is a unique sense of humour in much of her work, even when dealing with dark themes. A surreal edge, is informed by her view on humanity and all of its, seemingly perpetual absurdities. Mixed with a playful and open spirit, and a twist of simplicity. Millie's work may have fooled those lost and caught up in the consumer'ish, lust for one liner prose or sudo-designer art. Her work was more for those who were not bound by such distracting trends, it was and still is open for all. Often beguiling one with a presence of childishness, then as you live with it longer and feel its grace and power as it touches inside, a contextual knowing unfolds - levelling it all out with a wisdom that dares not to fall for show or spectacle to justify its true, authentic voice.

Originally via today and tomorrow