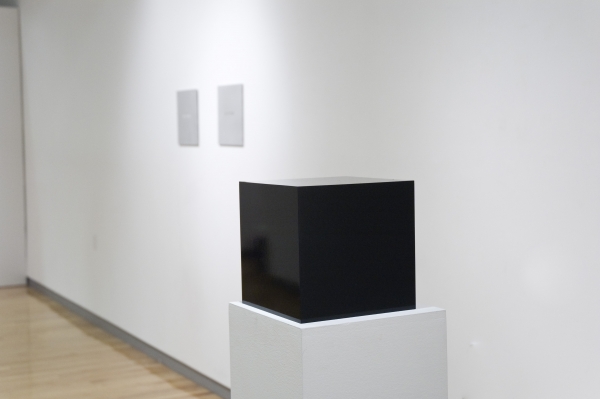 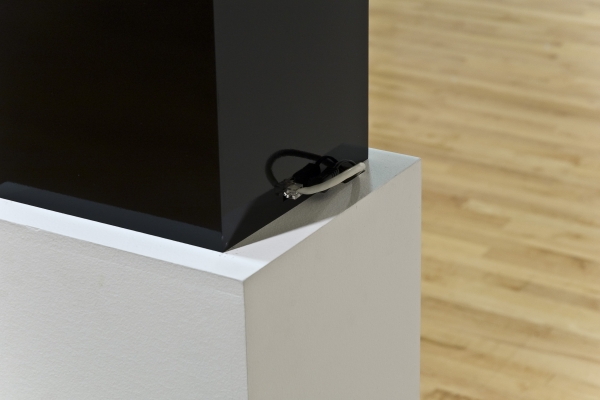 Combining Robert Morris' Box With the Sound of Its Own Making with Baudrillard's writing on the art auction this sculpture exists in eternal transactional flux. It is a physical sculpture that is perptually attempting to auction itself on eBay.

Every ten minutes the black box pings a server on the internet via the ethernet connection to check if it is for sale on the eBay. If its auction has ended or it has sold, it automatically creates a new auction of itself.

If a person buys it on eBay, the current owner is required to send it to the new owner. The new owner must then plug it into ethernet, and the cycle repeats itself.

This work is discussed in the catalogue for The Value of Nothing, a 2009 exhibition. Buy or download it.

--DESCRIPTION FROM THE ARTIST'S STATEMENT 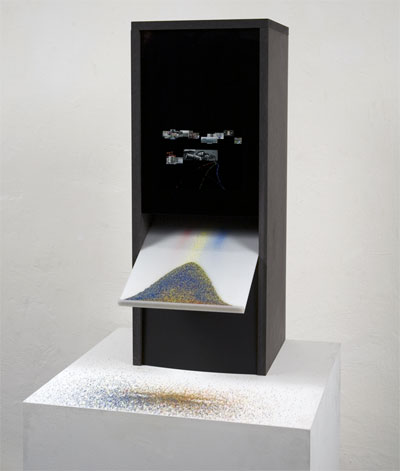 self.detach is a dynamic object, which adopts a critical position towards the celebration of the ego on the internet by dissolving self-portraying pictures into coloured particles.

--DESCRIPTION FROM THE PROJECT PAGE 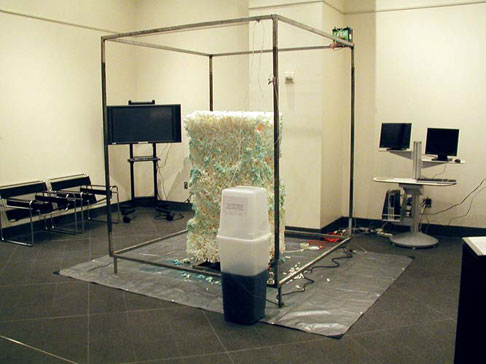 This gallery-installation/internet-art hybrid automatically created sculptures using spam and e-mail to trigger the sculpting process. It consisted of a steel frame surrounding a large block of biodegradable (starch-based) Styrofoam. Attached to the frame is the Eroder: a mobile sprayer that squirted colored water on to the foam. 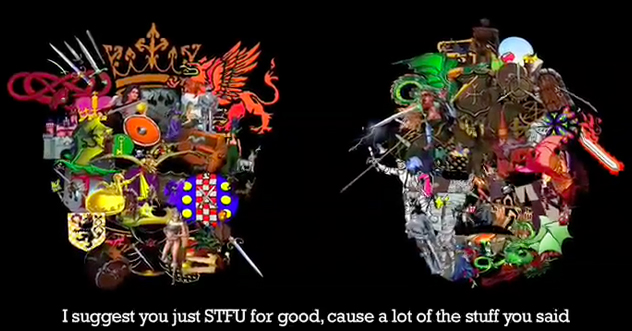 On Nathaniel Stern & Jessica Meuninck-Ganger's "Passing Between" at AOP Gallery

This past month, Johannesburg’s AOP Gallery, a space devoted to works on paper, hosted the exhibition “Passing Between” which showcased the collaborative output between digital artist Nathaniel Stern and printmaker Jessica Meuninck-Ganger. At the outset, Stern and Meuninck-Ganger approached the collaboration as a chance to learn each other's techniques. But they quickly chose to focus on their own strengths in a process they call, "passing between", hence the title of the exhibition. For Stern, the move toward printmaking comes from a long interest in the technique. In recent work, he has engaged with an expanded form of digital print making, using a hacked portable scanner to produce densely patterned sequences of natural images, in a project called Compressionism. For “Passing Between,” Stern concentrated on using digital photo frames as a medium for displaying loops of video obtained through live filming, and sampled machinima taken from Second Life. Meuninck-Ganger responded to the framed video loops with an encyclopedic range of printmaking techniques from wood block to mono print, silkscreen, etching, and photogravure. In some cases, she printed or etched directly on the screens of the digital photo frames; in other cases, the prints were layered over the screens creating a delicate conjunction between the fibers of the paper medium and the illumination of the underlying video. In The Gallerist, a prominent New York art dealer is portrayed anxiously perched on a chair in middle of a lithograph while below the surface of the paper machinima sharks circle him endlessly.

The effect is both magical and subtle. Jessica's images often capture a static moment from the subject matter of the video in etching or ink. The pleasure offered by the composite images comes ...

For awhile now I have been quite annoyed with Rhizome's favicon--->

Our current favicon feels a little clunky and if you ask me it is high time for a change. I have tried and failed several times to create one that is more elegant and after some careful consideration and consultation with the Rhizome team I think it is time to turn to our community for a favicon refresh. So for the next week, I invite all of you to try your hand at creating a favicon for Rhizome. If you would like to submit a design simply create a 16x16 pixel png/gif/jpg file, upload it to your server/tumblr/blog and embed it as a comment on this thread. You have until March, 10th 2010 to enter at which point the Rhizome staff will get together and choose a winner. The winning icon will replace our current one and we will add a credit somewhere on the site that links to an URL of your choosing. (Full Disclosure: The credit link will probably be small and at the bottom of a page somewhere, but come on.... bragging rights? google rank improvement?) Can't wait to see what sorts of big ideas you can come up with with such a small canvas.

If you don't have access to a server to host your submission please feel free to e-mail it to me at jm.boling[at]rhizome.org with the subject "FAVICONTEST" and I will upload and post it to this thread for you. 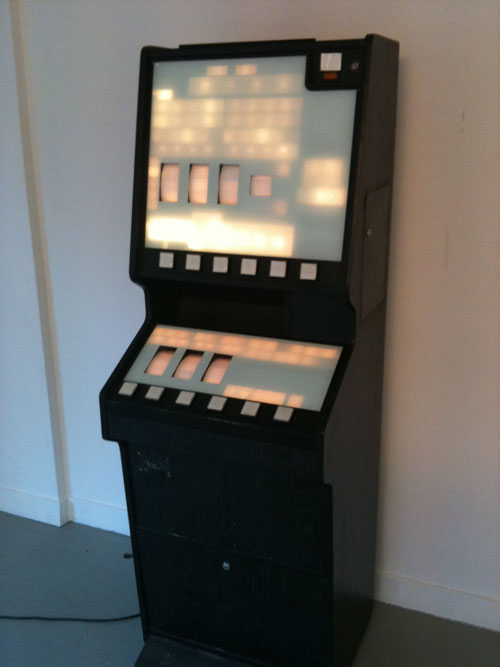 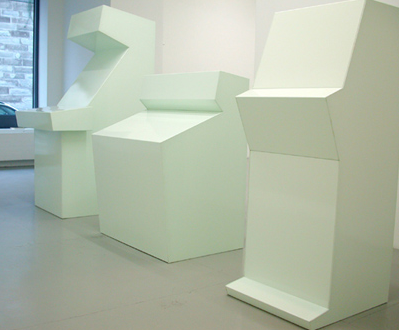