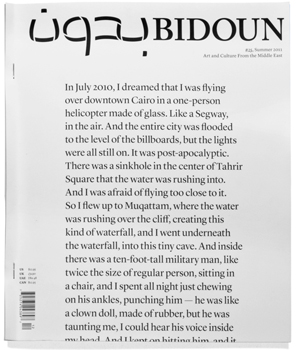 Twenty-five is special. This, the twenty-fifth issue of Bidoun: Art and Culture from the Middle East, responds to the Egyptian revolution that began on the 25th of January. (Twenty-five is also the median age of the Egyptian people.) In April and May, a group of Bidoun editors took over the first floor of The Townhouse Gallery in downtown Cairo, five minutes from Tahrir Square, to better understand what happened, and what did not happen, during the eighteen days of revolt, and after. We wanted to think critically about art and revolution and whether it was possible to make a magazine that wouldn't totally betray either. And so we walked around and looked and talked and—especially—we listened.

Bidoun 25 is the result, a rough and ready document, bristling with words—the product of over fifty unique interviews in Arabic and English, along with roundtable discussions, political party platforms, TV transcriptions, overheard dialogue, public apologies, dreams, tweets, and email forwards. Conversations and as-told-to tales appear amid found texts of every kind, from soap-operatic Mubarak family melodramas to post-revolutionary paperbacks to lists of looted antiquities and a compendium of negations found in news headlines (from "EGYPT IS NOT LIBYA" to "ZIMBABWE IS NOT EGPYT, HONEST.") Bidoun 25 is our most collaborative issue yet, produced in concert with dozens of Egyptian writers, artists, architects, and activists (including guest editor Yasmine El Rashidi). The result, we hope, is a kind of composite portrait, at once disjointed and revealing, partial but not trivial.

Inside, you'll meet the first family of the revolts, an intergenerational (and confusingly named) activist band that includes, among others human rights lawyer Ahmed Self El-Islam, computer whiz Alaa Abd El Fattah, and Sanaa Seif, a seventeen-year-old whose new magazine, Gornal, was born in Tahrir Square. You'll encounter ...

Signal Path is a site-specific sound installation for one performer. Sensors monitor eight electroencephalographic signals (brainwaves) while performer focuses his/her attention. Each EEG signal generates one tone. Each tone occupies a specific frequency range. When the artist’s attention level is above a certain threshold, tones will begin to stabilize and collectively produce an approximation to the harmonic series. Paradoxically, the moment that the artist becomes aware of the alignment he/she is distracted. This constant focus-distraction constitute a perpetual signal feedback loop that turns the artist into a cyborg and “short-circuit” the sense of hearing. 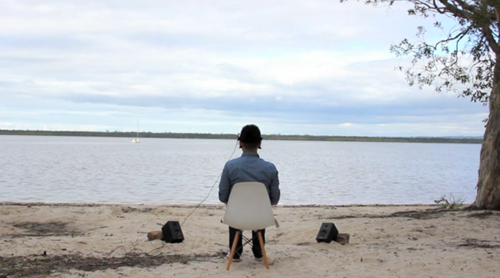 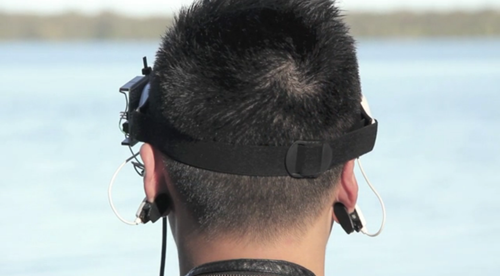 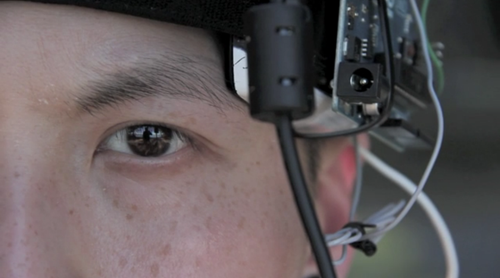 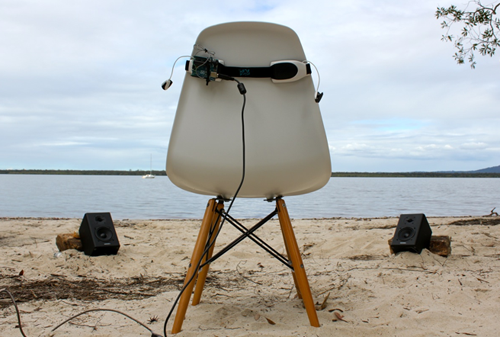 Margaret Kilgallen embodied handcrafted making in her work. She also quietly chanelled and appropriated the lexicon and symbology of vintage advertising. Reflecting on an exhibition of her work up now at Ratio 3 gallery in San Francisco there are undeniable corollaries between her intepretations of capitalism's presence in the everyday and artists who use tactics similar to hers but are engaged with more advanced technologies. The author Simon Reynolds added extra framing for Kilgallen's work in a recent interview:

The posher you are the more you have invested in a narrative of things being much better in the old days when people knew their place.

I think the whole antiquing thing, this vintage thing, has something to do with this weird middle class thing of wanting to distance yourself from consumerism while still consuming – because it's enjoyable and you like to have things – and I came across this really cool quote by this artist called Margaret Kilgallen. She uses a lot of commercial imagery and old commercials and signage and stuff from another era… things she got from advertisements in old magazines.

She said something like: "This stuff becomes interesting to me when it's no longer selling anything to me."

- Simon Reynolds, from an interview about his new book Retromania on The Quietus 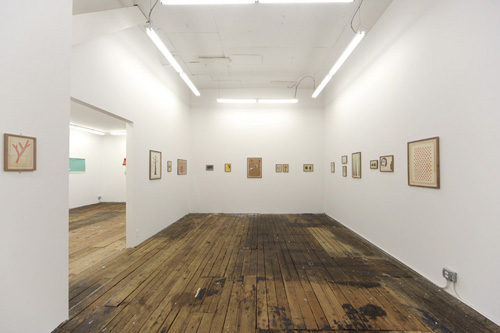 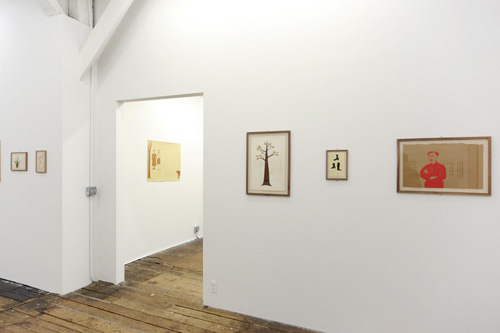 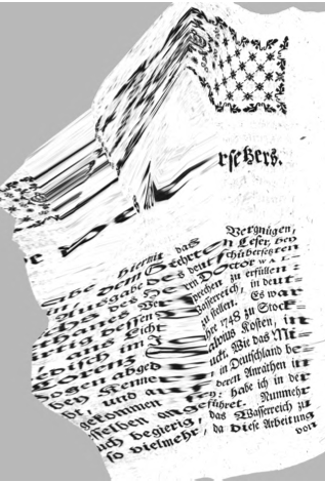 "Could there be a fitter representation of copyright's contemporary plight than the fingers of a Google technician obscuring Kant's defense of writer's rights? An author's consent, Kant cautions in a footnote, 'can by no means be presumed because he has already given it exclusively to another', yet Google is struggling to effect exactly this sort of transfer of consent today, as it attempts to win approval for a legal settlement in the United States that will allow it to republish works whose copyright owners have not come forward. I couldn't have read Kant's essay so easily without the Google technician's labour - in fact, without Google, I might not have got around to reading it at all - but her fingers were nonetheless in the way. The internet's attitude toward Kant's words is ambiguous, combining respect, appropriation, liberation and accidental vandalism," Caleb Crain once wrote, having discovered a spectral-seeming hand, while conducting research for his review of Adrian Johns's Piracy: The Intellectual Property Wars from Gutenberg to Gates. (The page has been rescanned, but the image is still on Nicholas Carr's blog.)

Wohlgemeynte Gedanken über den Dannemarks-Gesundbrunnen by Johan Gottschalk Wallerius is scarcely recognizable as a book with hundreds of distorted pages. (via Waxy.) 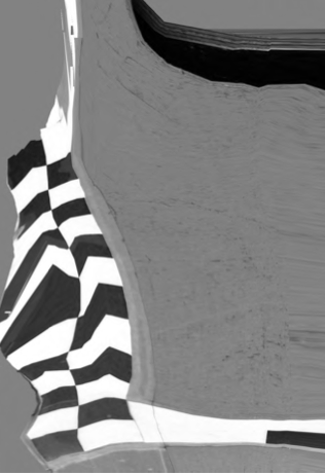 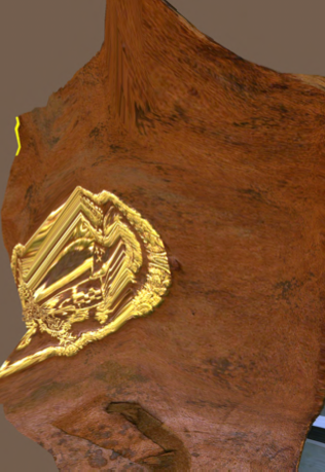 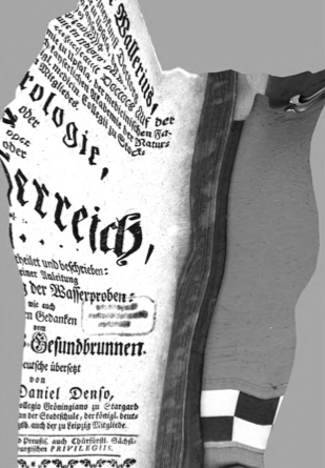 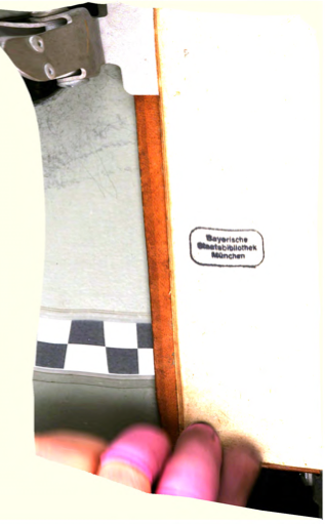 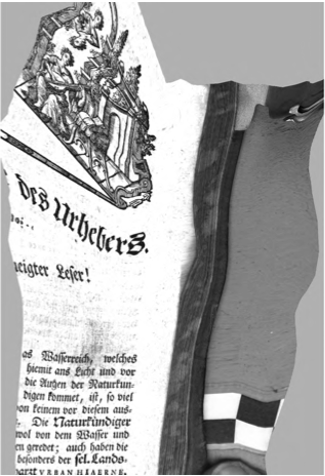 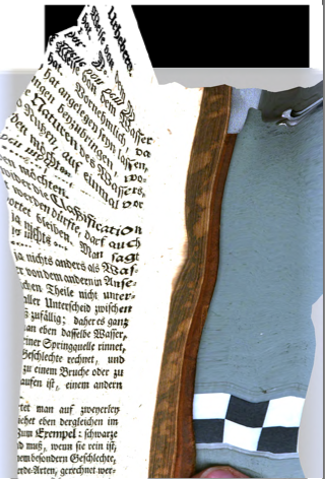 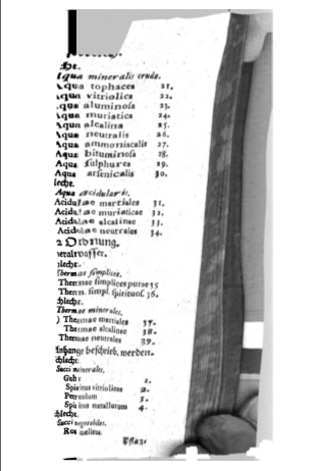 Language is a staple of art criticism, art history, and art making. In its frequent use as the architecture of communication, language mutates to survive and fit the needs of the culture that creates and maintains it. Continuing the lineage of glyph generation F.A.T Labs have created new QR_STENCILER and subsequently QR_HOBO_CODES which are QR translations of Hobo glyphs with additions made to help tech-savvy urbanites. 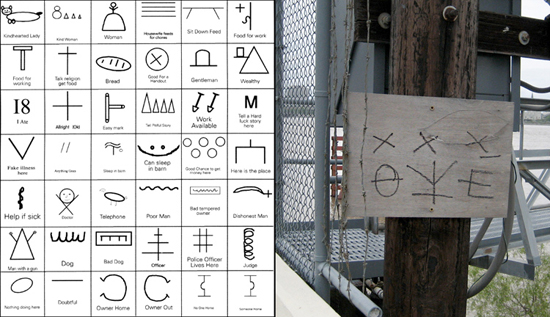 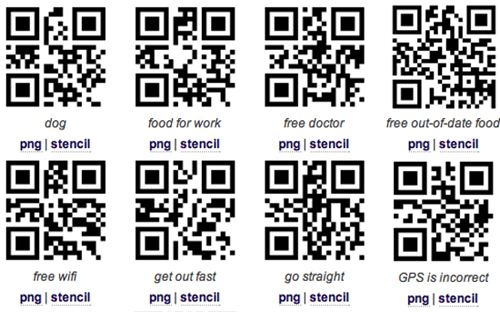 Light Industry Presents: This Is Marshall McLuhan, Aug 11th at the New Museum

This Is Marshall McLuhan: The Medium Is the Massage
Ernest Pintoff, 16mm, 1967, 54 mins, courtesy of Pratt Institute
Introduced by Alex Kitnick

This Is Marshall McLuhan: The Medium Is the Massage premiered in 1967 as one of the first installments of “NBC Experiment in Television,” an innovative series of Sunday-afternoon cultural programs that would later include such diverse offerings as an animated special by Harold Pinter, Jim Henson’s live-action teleplay The Cube, and extended profiles of figures like writer Scholem Aleichem, cartoonist Al Capp, and architectural visionary Buckminster Fuller. McLuhan’s episode appeared at the height of his notoriety within popular consciousness: 1967 also saw the publication of McLuhan and Quentin Fiore’s book The Medium Is the Massage: An Inventory of Effects, the fourth issue of Aspen magazine edited by McLuhan and Fiore, and an LP recording of The Medium Is the Massage released by Columbia Records.

An attempt to articulate McLuhan's ideas through the language of one of his paradigmatic subjects—television—This Is Marshall McLuhan intersperses observations by McLuhan himself with commentary from art-world figures like gallerist Ivan Karp, artists Malcolm Morley and Allan Kaprow, and Museum of Modern Art curator Inez Garson. As if to illustrate McLuhan’s dictum that “all media work us over completely,” these remarks are punctuated by rapid-fire montages of pop culture and the avant-garde, mixing performances by Nam June Paik and Charlotte Moorman, go-go girls, stand-up comedians, and Madison Avenue’s most countercultural ads into a Laugh-In-era attempt at televisual information overload. An evocative dispatch from a moment when culture's relationship to ... 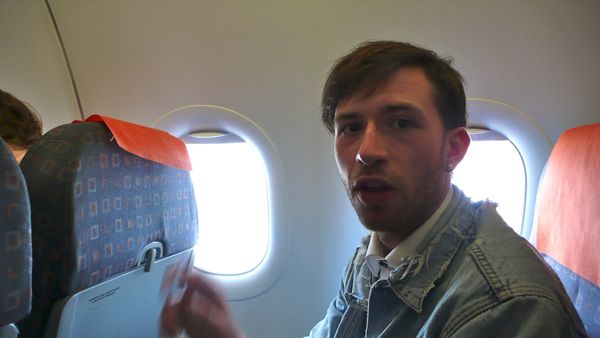 Greeting me upon my arrival was the venerable Ben Vickers, a colleague and friend I met on my last trip to London, at his warehouse in Manor House, perhaps the Bushwick equivalent of North London. I'd been in touch with Vickers since he curated an exhibition with some internet art “usual suspects” for a gallery in Peckham—Jon Rafman, Parker Ito, etc. —which, at the time, seemed an anomalous locale for these buzz names. Although I've written previously about Vickers' work with the now-defunct duo Sopping Granite, it feels strange to write about him now. Not only has he become more of a friend than a professional contact, but I wonder how much he would even care that I write about him, or how useful it would be to him, or if he would consider this as a flag in the journey of his burgeoning practice, as most artists likely would. This is all indicative of Vickers' “practice,” if you could call it that... 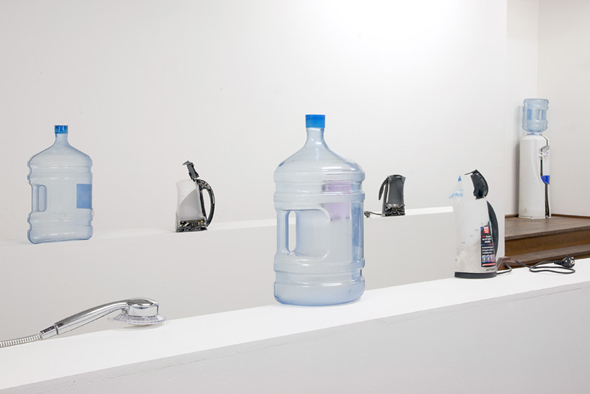 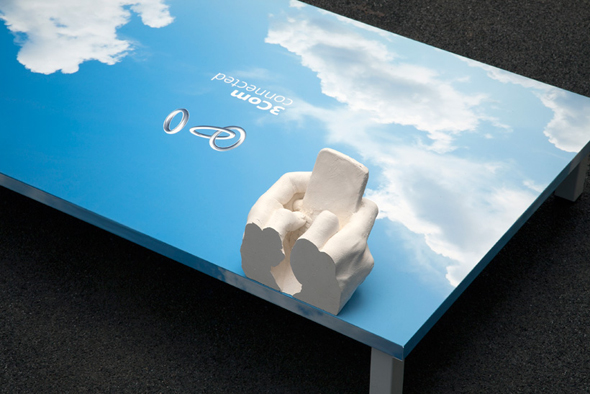 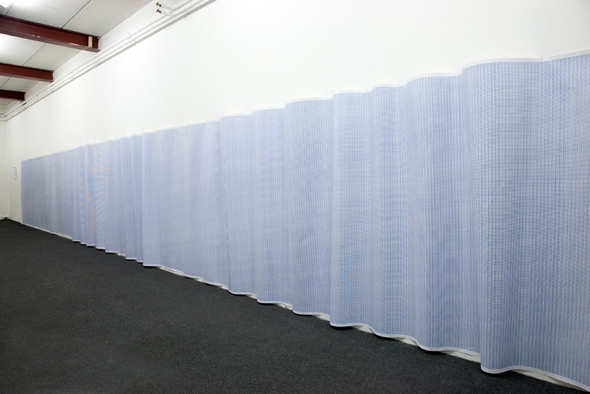 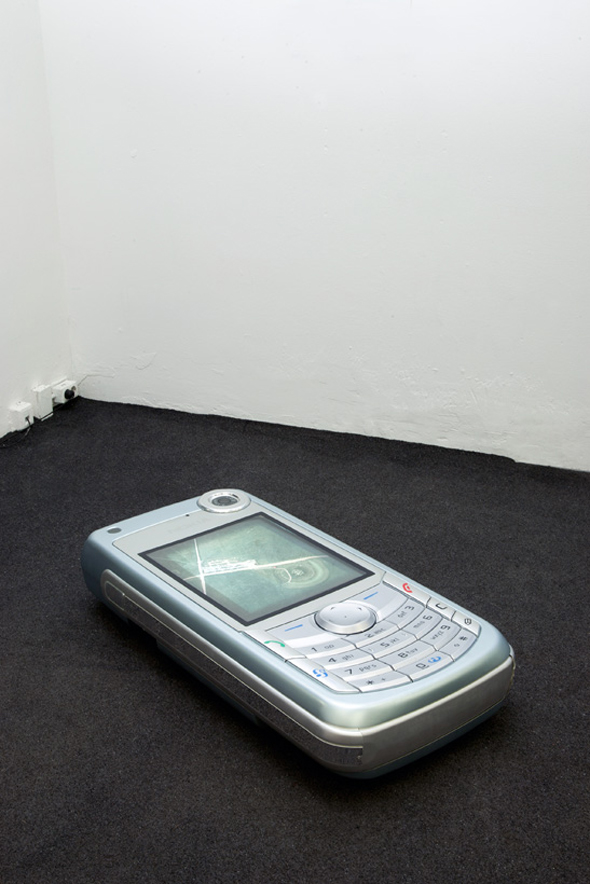 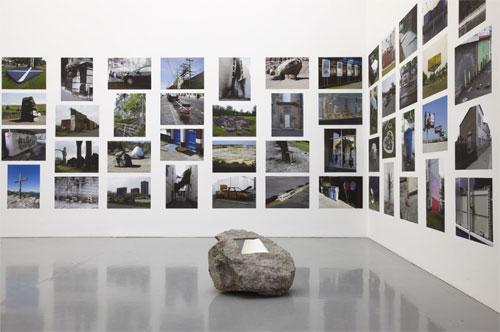 The Pleasure of Recognition, 2011 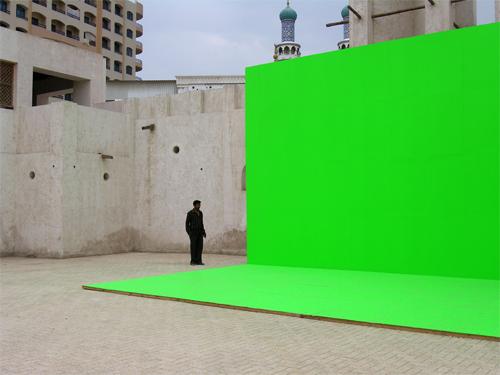 Wandering Through the Future (Installation), 2007

Back in November you posted a compilation of highlights from 'Armin Only' to your blog. It reminded me of a recent documentary about Anselm Kiefer's 'installation' in an abandoned French silk factory entitled Grass Will Grow Over Your Cities where his now clearly much less limited resources allowed him to expand his practice to an architectural scale and create what reviewers were calling a 'gesamtkunstwerk' ('complete artwork' more or less). With unlimited resources, time, space, and manpower what would be your 'complete artwork' piece at this point in time? Would that sort of thing interest you?

I think there are always constrictions and limitations on any and every project--even projects executed by the most wealthy performers with the most insane budgets, when resources may seem "unlimited". Lil Wayne still has to deal with TV executives who bleep out his curse words on TV. U really think Tyler from Odd Future can do whatever he wants?? Everyone is "just doing their job"--sadly there is no Dr. Evil/Andy Warhol with the ability to manipulate everything absolutely--no one is in charge/we are all in charge, in our own way. What makes things compelling is the complexity involved in all the compromises. If you can show some of that chaos/complexity to your audience in a way that they can understand, perhaps you are getting somewhere  . . . I like to imagine all the people involved in that Armin performance with their various agendas struggling together to make this crazy important thing, all these different people expressing and negotiating with one another's desires . . . but it's not a "Complete Artwork", not sure there ever has or ever will be one . . . doesn't everything just feel like a work in progress?? The first and only gesamtkunstwerk will be ...