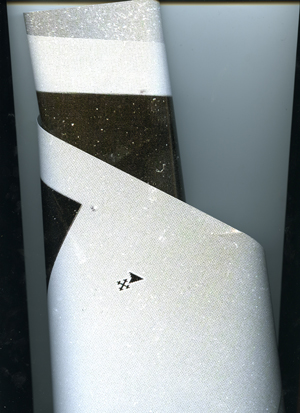 Many of your works seem interested in the tension between analog and digital in the creation and reception of a work, like physical xerox scans of the screen of an iPad.  To what degree do you connect a piece to the technological platform on which it was made?

The Pad Scans are scans of an iPad. The iPad is confused by the light from the scanner that produces heat making it think it’s being touched. So the scans are capturing the iPad rolling over to another web page, making visible these digital or web in between spaces.

Error feels a sign of humanness. For me it’s important to insert that into an image or work dealing with mediation and technology. In this constant looping between the physical and digital worlds images are unstable in that they are left always open to reuse.

I also recently learned the term ‘retronym’, which feels a linguistic insight into my working process. (A paralleling of technological advances and in the face of them a return to the past to update/qualify/recontextualize.)

Your naming conventions vacillate between identifying their originating platform (iPhone Videos, Pad Scans) and describing their final form (Prints of Plays). In terms of these degrees of mediation from an initial image, how important to you is the ultimate format of the work versus its role in destabilizing that image’s objecthood?

Everything is important in different degrees at different times in different works in different ways. There is so much process, yet when pieces are ‘finished’ as in hanging on a gallery wall there is no separation between image and form or object and picture. Though this unification is so fleeting, as it lasts for the course of a show and only if you ...