This is a story about not asking permission.

It starts with Occupy Wall Street.

I'm an artist who got her first job making covers for SCREW Magazine. While I gradually carved out a nice career doing every sort of art that one can extract a living from, I had always been afraid to draw "activist things." Real struggles were serious business, and I drew girls with feathers and bare tits.  Making activist art seemed like posturing. So I'd sell paintings on Twitter to raise money for abortion funds, but hide the subversive bits in the margins.

The last few years changed that.

Suddenly the world was crumbling, and people from London to Tahrir Square were taking to the streets. Everyone said Americans were too apathetic for that.  But we weren't. 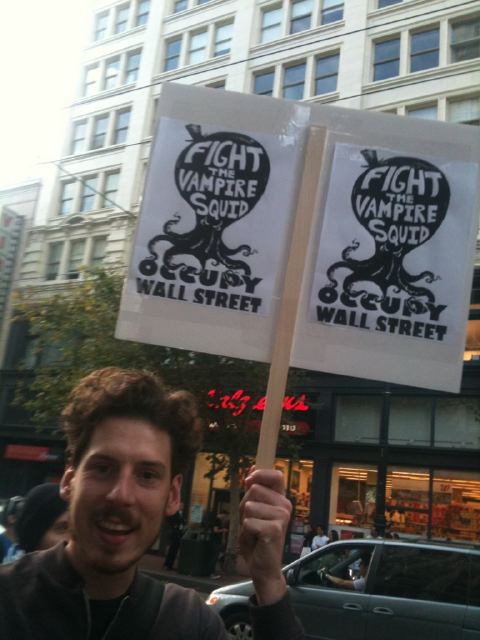 When Occupy Wall Street first parked their mattresses in Zuccotti Park, my friends and I felt that something very rare was happening, and that we should help however we could. Noticing a lack of OWS graphics, I drew up a clunky octopus with "Fight the Vampire Squid" written on its belly. It became a protest sign around the country. Since then I've been churning out posters for Occupy — for libraries and general strikes and unions. Doing political work enabled me to take the subtext dancing at the margins of my art, and make it loud and proud.

Political posters are fast. I'd draw one, brain on fire, and two hours later a masked protester would be carrying it on the streets. But I wanted to do something bigger- to take the political content of my OWS work, and express it in paintings that were giant and detailed. I wanted to make the kind of art that takes 100 hours of carefully daubing paint onto a giant piece of wood. The sort of work that would traditionally be sold in galleries...