The Rhizome Commissions Program was founded in 2001 to provide support to emerging artists working with new technologies. The forty-four works commissioned to date represent some of the most innovative, pioneering efforts in the field. At the New Museum on May 22nd, several artists who received support in the 2008 cycle will present their finished projects as well as other select projects. Artists to present include Evan Roth, Eteam (Hajoe Moderegger and Franziska Lamprecht), Steve Lambert and Rafael Rozendaal.

Why not fill it with 1 or more of 3 Rhizome-related activities?

1) Attend Blank Spots on a Map: State Secrecy and the Limits of the Visible, Trevor Paglen's talk at the New Museum tonight at 7:30pm

2) Buy tickets for the Rhizome Benefit.

3) For our members all over the world: view and vote on Rhizome Commissions. Every year, our community selects two of our seven commissions. Cast your votes today! 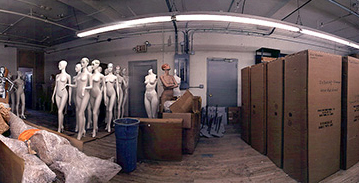 We've assembled a luminary group for the 2008 Rhizome Commissions jury. In collaboration with the Rhizome staff, the jury will determine five artists/ collectives to receive awards ranging from $3,000-$5,000. The remaining two are awarded by member vote. In contrast to previous years, this jury will review all the applicants -- not just the finalists.The jury includes Oliver Laric, artist and co-founder of VVORK, Barbara London, Associate Curator, Department of Media, The Museum of Modern Art, New York, Emma McRae, Curatorial and Projects Coordinator, Experimenta, Melbourne and Rick Rinehart, Digital Media Director and Adjunct Curator, Berkeley Art Museum and Pacific Film Archive.From Rhizome, they will be joined by Luis Silva, our Lisbon-based Curatorial Fellow, and Lauren Cornell, Executive Director and Adjunct Curator at the New Museum.

The application deadline is midnight, March 31st, which means two more weeks! Read more about the program and how to apply now!

Image from Phrenology by Melanie Crean, a 2008 Commission.