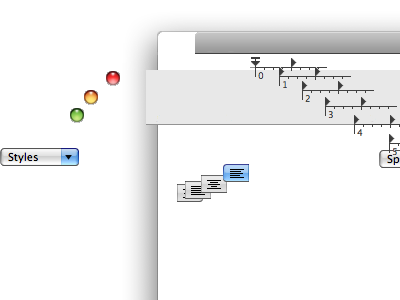 Statement: This video is an animation of the process of saving an image file in continuously lower file formats over hundreds of times.

This image is of a quote, taken from Douglas Davis' essay, "The Work of Art in the Age of Digital Reproduction," which argues (in part) that unlike analogue signals, which are like waves crashing upon a beach and losing clarity with every ebb of the tide, digital bits "can be endlessly reproduced, without degradation, always the same, always perfect." 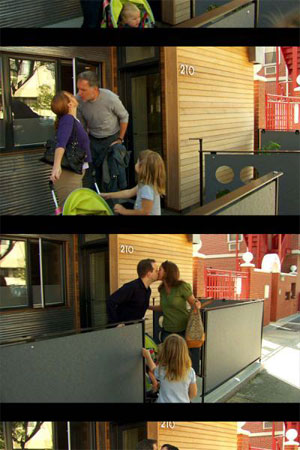 Jennifer and Kevin McCoy are a married couple of New York-based artists whose collaborative work conveys a love of film and televised narratives. Their early projects embodied database aesthetics as they chopped shows like 8 is Enough, Kung Fu, and Starsky and Hutch into short clips, often inviting viewers to rearrange them according to what we'd now call metadata. For instance, one could choose from a bank of DVDs in their Every Shot, Every Episode to watch every occurrence of the color blue, or of extreme close-ups. More recent works have entailed building elaborate miniature film sets, complete with working cameras, to shoot microfilms. In the case of High Seas, the set is a sort of kinetic sculpture in its own right, mimicking its subject as it moves around to create shots of the famed Titanic loosing its footing on the ocean. The role of filmic media in mythologizing the ill-fated boat is of course implicit in the installation. While these projects have always been infused with a sense of subjectivity, as the artists perform their fandom through their selective decisions, lately their work has incorporated more explicitly autobiographical elements. Their piece, Our Second Date, for instance, is a miniature movie set which features the artists watching the film from their second date, Weekend, reenacted through a mobile sculpture and video streamed live to a tiny screen. The choice to position themselves as spectators within their own reality, and moreover to confess that their romance budded around screen pleasure opens up a number of interpretations of their ongoing work and paves the way to their newest project, which opens November 22nd at Postmasters Gallery. In I'll Replace You, the artists again place themselves at center stage, without stepping in front of the camera. Instead, a series of different ...

"Assembly Instructions" is a visual thought map, comprised of over 120 small framed black and white xeroxed collages, by Brooklyn-based artist Alexandre Singh. Each collage represents an idea, which the artist connects to other collages via a network of dotted lines. The city of San Francisco is the originating point for the series, and the visitor can follow Singh's train of thought related to this subject by following the intricate and tangential maze of images, which spread throughout the gallery. In a sense, this project is almost a tactile answer to the visual sequence of ideas encountered on sites such as FFFFOUND!, while also drawing on the older practice of free association. The exhibition is up at Jack Hanley Gallery in San Francisco until the end of November. 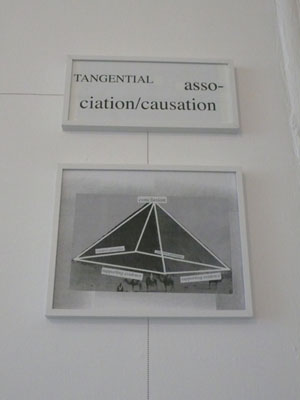 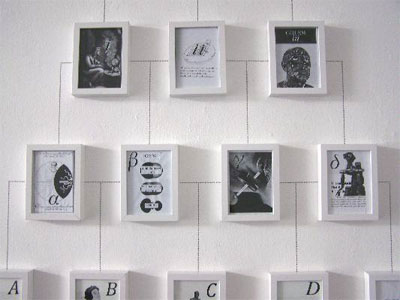 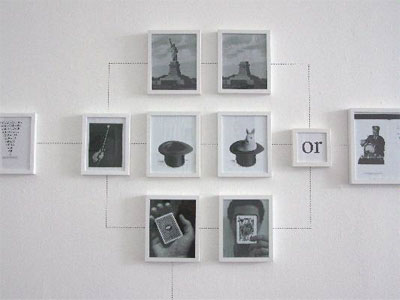 Artist's Statement: A video demonstration of a classic Experimental Philosophy experiment on "The Concept of Intentional Action" (AKA the "Knobe Effect"). Comedian Eugene Mirman narrates.

Long before flash mobs, liveblogging, and file-sharing were part of the vernacular, artists were creating social sculptures and elaborate systems for public collaboration. The upcoming SFMOMA exhibition, "The Art of Participation: 1950 to Now" takes a sweeping look at work that addresses co-authorship, exchange, and rapidity--all themes we associate with life in a digital society, but which the show traces back within a post-war art historical context. Organized by the museum's new media curator, Rudolf Frieling, the show includes works ranging from groundbreaking projects by Vito Acconci, John Baldessari, John Cage, Felix Gonzalez-Torres, Dan Graham, Hans Haacke, Lynn Hershman, Yoko Ono, Nam June Paik, and Andy Warhol, to contemporary work by Jonah Brucker-Cohen, Janet Cardiff, Minerva Cuevas, Antoni Muntadas, the Raqs Media Collective, Warren Sack, and Erwin Wurm. The show also casts a glance at the ways in which the title's theme has evolved with communicative media. Take, for instance, the old-fashioned gesture of audience participation. Tom Marioni's legendary public project The Act of Drinking Beer With Friends Is the Highest Form of Art offers an intoxicating stance on the act, while MTAA's Automatic for the People: ( ) allows you to vote on the theme, props, and even subtitle of a performance they'll publicly enact at the museum on November 7th. If you can't make it to San Francisco to see the show and participate live, you can, of course, get in on the act with the online works. Because, really, the show's nothing without you. - Marisa Olson

Artist's statement- Vote For Anything is a kind of a social experiment as well as an Internet "game" that was running even before the widespread adoption of the "World Wide Web" HTTP protocol. It originally ran as part of my gopher-based "e-zine" Glum Homebody, on the gopher of ECHO, gopher.echonyc.com (which is no longer available)...As the Web expanded beyond the original confines of CERN, I adapted the underlying program to run as a cgi-bin program on my personal web page at ECHO and also at WFMU.org, where it runs today. A few years ago, I prettied up the color scheme, but it basically runs the same as it always has... It's an interesting art piece that can be hijacked by someone with an axe to grind, simply by writing in people and things they wish to hate or promote. From an early implementation, I've always filtered out HTML in the write-ins, so that no redirection or other spoofing would be possible. By allowing for negative votes, one can actively disapprove of something, which fulfills a real need for voters. No one is restricted from multiple votes for multiple items, which sounds like it should make it easy to jam the election in some way, but in fact, this has never happened. The list of candidates ends up looking a little like lists of search engine search items, but they are a little more intentional. The open ended nature of the list lets incongruous items creep in between more serious entries, if any. In fact, incongruous items tend to take over the list, making a kind of collaborative poem, if there's enough traffic.

A play in two acts. 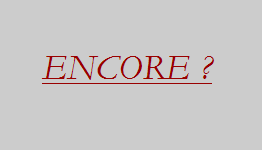