bits & pieces is a continuous composition that gets its source sounds from the web. Every morning a special search process looks for web pages with links to sound files. If links are found, the sound files are downloaded. The day's 'catch' is then used to create the pieces in bits & pieces for the next 24 hours.

This is a simple mod I did of the old Japanese famicom driving game F1 Racer. Basically I just took out the game, cars, etc, and left the road. 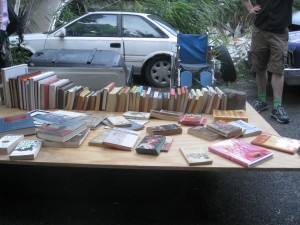 Art21's blog posted an interview with artist Sam Gould of Rhizome-commissioned collective Red 76 yesterday. Gould discusses the unique pedagogical models used in Red 76's projects, and the willingness on the part of a number of museums to adopt these methods into their programming. See below for an excerpt, full interview here.

The work, in an artistic sense, that I’m involved in creates zones in which to engage your desires, question your efficacy, and imagine a practice outside of the space in question. It is an educational zone, based on experience and within an experience, but it is not the zone or the experience which is the topic of discussion.

ASDF, the joint collaboration between Mylinh Trieu Nguyen and David Horvitz, announced a new project yesterday, S.A.S.E.. Adopting the format of the self-addressed stamped envelope, where the receiving party sends an empty envelope to the sender in order to obtain a reply, potential viewers of the ten email-based exhibitions must send an email request to ASDF to receive the show in their inbox. Each exhibition contains a statement, a works list, and a selection of images. Many of the exhibitions read much like art projects, such as Michael Mandiberg's "FDIC Insured" in which the artist assembles the corporate logos for banks recently closed by the recession, found from images searches and the Internet Archive's Wayback Machine. Image searches figure into Jess Wilcox's "Discovery of Orange" as well, a show that loosely collects images referring to the color in an effort to illustrate its artificial manufacturing. The results fluctuate from Vincent Van Gogh's Cafe Terrace at Night to a photograph of construction cones to the Nickelodeon logo. ASDF are offering 11" x 17" prints of the email exhibitions as well, but only through - you guessed it - a self-addressed stamped envelope.

SUPERFLEX's artwork for One Day Sculpture involves the employees of Auckland's Karangahape Road branch of the ANZ bank. For a single day, Wednesday 27 May 2009, 09.00 - 16.30 all employees of the bank cannot say or use the word 'DOLLARS.' The staff must use other words of their own choice to explain themselves to customers and co-workers. If they break this pact they must pay a fine of $1 into a staff social fund.

-- FROM THE SUPERFLEX SITE

On every dollar bill that come through my hands I am stamping the back with: A small distraction interrupting you from your everyday routine.

Lisa Oppenheim is interested in how the present viewer sees media of the past, and to study this she takes materials from archives and transforms them with editing effects that distill her interpretation of how an image’s meaning changes over time. For a show at tank.tv, on view through July 21, Oppenheim has revealed her sources and processes in texts accompanying five of her moving-image works. E-M-P-I-R-E reconstructs Andy Warhol’s eight-hour film of the same title using a single 100-foot roll of 16mm color film. “Unlike Warhol’s endurance test of extended filmic boredom, this version uses the language of structuralist ‘flicker’ films of the late 60’s and 70’s,” Brian O’Connell writes in an essay excerpted on tank.tv. He goes on to inform us that the rhythm of the flickering Empire State Buildings spells out “E-M-P-I-R-E” in Morse code—a system as obsolete as 16mm film. Explanations like these never hurt, but Oppenheim’s work is stronger when the transformation of an image over time is a compelling sight in itself. The two channels in Story, Study, Print (2005) juxtapose children’s posters used in predominantly African-American schools in the 1970s with a disconnected sequence of still and moving images; here, chance and obscurity force viewers to form their own associative links rather than relying on a statement to decode meaning. In Yule Log, 2008, a soothing image of a fireplace at Christmastime deteriorates through several repetitions, each one a 16mm copy of the last, while The Sun Is Always Setting Somewhere Else (2006) is a slide show where each frame shows a hand holding snapshots of a sunset ...