The Danmaku Game as a New Optical Art, Part I 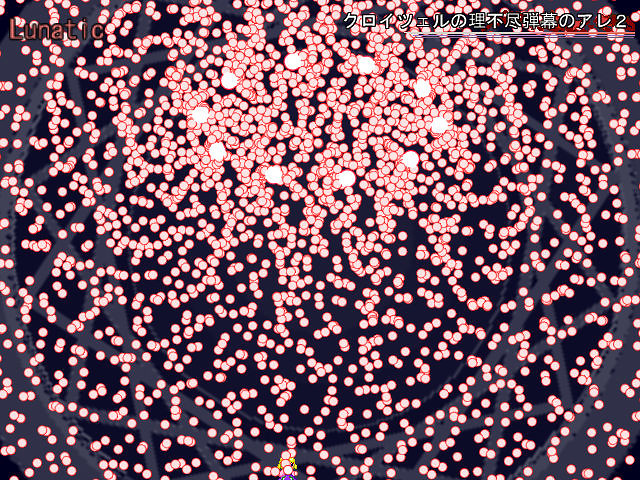 The ‘Apollo’ game center near Abeno Station in Osaka is indistinguishable from dozens of others scattered throughout urban Japan, yet is no less compelling for this fact: as far as total sensory environments go, there are few things like it, and the over-abundance of loudly competing sound sources makes it is easy for one to get ‘lost’ in here even with an easily understood floor plan. To that end, the game consoles in this establishment are organized by genre in their own compact micro-districts or “functional clusters” of three or four (an organizational strategy that is seemingly carried out on a much grander scale by Japan’s urban planners.) Slinking gradually from the main entrance to the rear of the establishment, I first have to navigate past a throng of uniformed high school students watching intently as one of their representatives dances for his life on the one-man stage of a Dance Dance Revolution spinoff. Similar dramatic scenes play out on the nearby musical instrument simulators, with wide-eyed and spiky-maned boys proving themselves to their peers by banging stacatto rhythms on replicas of wa-daiko drums, or shredding away on pushbutton-powered guitars. The crowd noticably thins out as I reach a room separated from all this energy expenditure, where an older and more sedentary gaming constituency - either oblivious or indifferent to the hyperactivity in the adjacent room - sits tranquilly in front of tooth enamel-white game consoles housing mah-jongg simulations or nostalgic arcade hits from the country’s sorely missed “bubble” decade. They languidly go about their business while enjoying canned coffees and Seven Stars cigarettes, sitting in close proximity yet effectively isolated in their private capsules of shuddering screen glow.

However, their disaffected behavior - which, coupled with their standard dress of pressed white shirts and loosened mono-chromatic neckties, makes their leisure time here seem like just an outgrowth of their office workdays - is somewhat miselading: tucked away in their refuge are some of the most nerve-wracking, blood pressure-inflating electronic games yet devised, known in Anglophone fan circles as “manic shooters” but known locally by the more colorful sobriquet danmaku [弾幕、”bullet curtain”.] With their provenance in the Tokyo game workshops of ToaPlan and Cave (the latter rising from the ashes of the former almost immediately after its 1994 declaration of bankruptcy), the games’ common objective is simplicity itself: players, in a single or double configuration, navigate their personal spaceship icons through virtual battlefields of progressive complexity and difficulty while destroying enemy war machines, collecting both points and weapons upgrades for their efforts, and making sure to dodge the considerable amount of enemy fire. 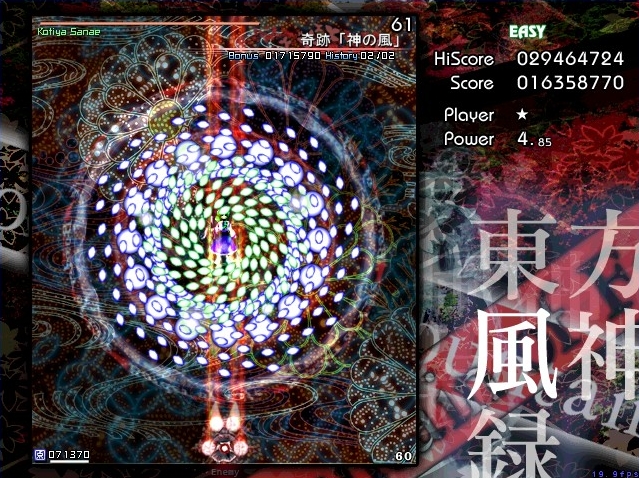 Despite this apparent banality, a minute’s worth of patience will reward the player with an aspect of these games’ visuality that is, in fact, highly unique - even if that uniqueness is merely a matter of taking some familiar visual elements to an extreme of saturated perception. Namely, the “enemy fire” in question greets the player as an amorphous mass of flickering color that seems to take on a life independent of its releasing entities: in the danmaku game, orb- or arrow-shaped projectiles form the atomic units of pulsating, multi-hued latticeworks and arabesques. Sometimes these designs will manifest as screen-swallowing circles with equidistant radii or spokes, or will wheel across the entire screen space in the form of undulating tendrils, or on other occasions will rain down like multi-colored confetti streamers. They will coalesce into individual strands of menacing webs, or spin wildly in double helix formations. In worst-case scenarios, such as the final battle of Cave’s 2004 hit Mushihime-sama [虫姫さま、“Insect Princess”], an uncountable number of angry magenta orbs settle into an oppressive rolling fog, with seemingly no gaps through which to escape. A teasing, moderately difficult ‘period of emergence’ generally lures players into these more challenging moments: they may be required to fight through a couple of preliminary game levels for the dynamic variation in such patterns to become truly impressive, with the more superlative moments of danmaku exhibition being reserved for one-on-one confrontations with hulking end-of-level “boss” characters (e.g. the stage-climaxing super-villains of Cave’s 2010 tour de force Akai Katana [赤い刀、”Red Blade”] who summon up and hurl massive gunships that unleash their own hot-pink torrents of fire in turn.)

In keeping with the familiar game taxonomy that sees game genres being named for the action involved in them (e.g. “shoot ‘em up”), danmaku games have also been refered to more specifically as danmaku kaishi [弾幕回避, “bullet evasion”] games. Yet whatever relation one has to the ‘bullets,’ it would not be too much of a reckless leap in reasoning to name the “bullet curtains” themselves as the true iconic “stars” or attractions of these games (in most of these games, only cursory efforts are made to weave a narrative around the pilot characters or their anatagonists.) Arcade gamers must learn very quickly, in order to make their sacrifice of 100-200 yen a worthy one, to view these tantalizing clusters of glowing globules or phosphorescent spear tips as the primary focus of their visual attention: no matter how well rendered the digital landscapes are in which the action takes place, or how intricately detailed any of the in-game objects may be, they must be treated as a kind of extraneous visual noise. The most successful danmaku players must hone a kind of visual essentialism that recalls the Optical paintings of Tadasuke “Tadasky” Kuwayama: his characteristic ‘concentric circle’ works not only presented an illusion of three-dimensionality, but conferred the illusion of being animated or ‘breathing’ objects as well (we could also refer to 19th-century harmonograph etchings for other designs in which concentric circles appear three-dimensional or spherical.) Showing another kind of kinship with Optical art works, the screen images of flaring bullet curtains can provide the viewer with a ‘post-exhibition exhibition’ in the form of entoptic phenomena: though appearing in a less unequivocally colorful form, the danmaku formations continue to twist and dance beneath closed eyelids for brief post-play periods.