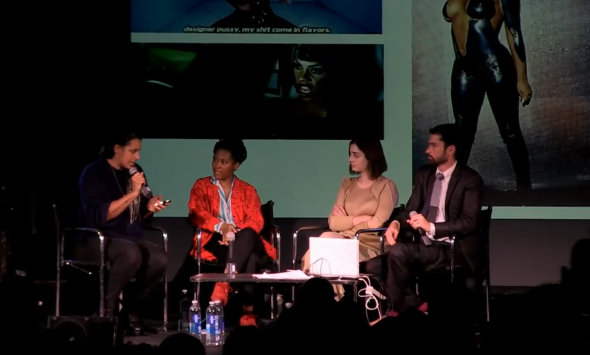 This is the third and final panel discussion in "Do You Follow? Art in Circulation," a talks series organized by Rhizome and the ICA, hosted by Rosalie Doubal and moderated by Michael Connor. This talk began with the polemic prompt that "Internet circulation changes bodies into image-bodies."  A transcript of the first panel is available already; the second panel's transcript is delayed because of technical difficulties.

Rush transcript compiled by Loney Abrams and Anton Haugen. Discrepancies may exist due to transcription errors or unclear audio. Original video footage can be found here.

Michael Connor: Today's panel deals with the theme of bodies as— bodies and images in circulation. We are going to have a video by Hannah Black. The other panelists Amalia Ullman and Derica Shields will then join me on stage. Amalia will present her Excellences & Perfections performance, kind of the first real public-outing for that particular body of work. Derica will give us a visual sampler of the "Black Woman Cyborg," and then, we will have a general discussion.

This has been a really eventful week. This has been the most immersive, best research experience for me, personally, and I hope for some of the people who have joined in as well. The first panel began with questions of aesthetics and artistic practice, and how we think about aesthetic judgment when the work as a stand-alone entity is dissolving into this idea of the work as a circulating object. In the first talk, there was quite a lot of emphasis on opinions being statements of a subject-position rather than any sort of assessment of a work. There was also a lot of emphasis on the idea of disavowing, on resisting internet circulation, resisting being a part of media cultures, and developing alternative infrastructures.