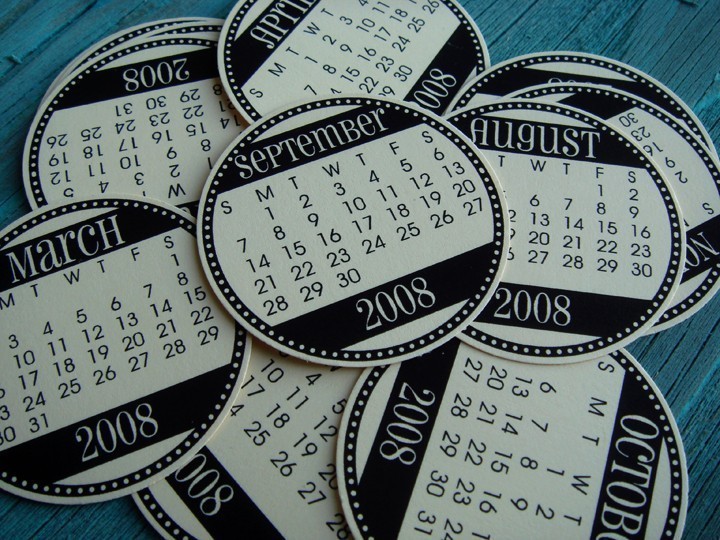 In lieu of a "Best of" we've decided to pull together projects, events and developments within the field of art and technology that we felt were noteworthy. Like all year-end reviews, it would be impossible for this list to be entirely exhaustive, however we do hope that it is, at the very least, indicative of some of the most compelling directions and ideas in circulation over the past 12 months. Rhizome staff John Michael Boling and Ceci Moss assembled this list, with input from Caitlin Jones.

createdigitalmusic.com will pair up with Etsy.com, Make Magazine, and XLR8R.com tonight for "Handmade Music" at 3rd Ward in Brooklyn. This free event will showcase, Science Fair-style, an array of eclectic homemade instruments and the tinkerers behind them. For a lengthy preview with images and videos, check the CDM site.

In the early seventies Gerald O'Grady, a professor of English Literature at the State University of New York in Buffalo, was asked to become director of the euphemistically titled "Educational Communications Center." The division was to provide technical support for the entire campus. Sensing a thankless administrative appointment he agreed, but only if he could simultaneously create and direct a department dedicated to the study of emerging media, one that would provide artists and filmmakers access to these technologies and a theoretical basis from which to explore it fully. Thus, the Center for Media Studies (MediaStudy/Buffalo) was formed. Groundbreaking in its scope and focus, the faculty included filmmakers Hollis Frampton, Tony Conrad, Paul Sharits, and James Blue, video artists Steina and Woody Vasulka, and Peter Weibel. The book Buffalo Heads: Media Study, Media Practice, Media Pioneers, 1973-1990, edited by Woody Vasulka and Peter Weibel, thoroughly documents the people and activities that were a part of this highly influential center. Part exhibition catalog (a similarly titled exhibition "Mind Frames: Media Study at Buffalo 1973-1990" was mounted at ZKM in 2007), part catalog raisonné, and part coffee table book, and coming in at 837 pages and almost 10 lbs, it could be called the definitive text on this place and period.

It's easy to see Philip Ross as a recent embodiment of an age-old spirit of inquiry, where aesthetics, personal discovery, and scientific knowledge are linked, and all seem to tap into the fertile edges of local industry. In San Francisco that means computing and biotechnology, and Ross's work makes use of both. The transplanted New Yorker has a body of artwork that centers around human interaction with biological materials like fungus, plants, and mollusks. Ross was also curator of the BioTechnique exhibit at Yerba Buena Center for the Arts, and frequently teaches classes and gives lectures, such as one he delivered December 2 to amateur mycologists at the Oakland Museum of California.

His current projects include a long-term effort to grow a large building out of mushrooms, and a new, ongoing salon ("Critter") at the Studio for Urban Projects, a unique cultural center opened in 2008 by Alison Sant and Marina MacDougal. Ross describes the studio as "a collective of collectives," with about five or six contributing programmers, all similarly interested in ecology, education, technology and other related fields. - John Alderman

From Bell Labs to Best Buy

"PREDRIVE: After Technology" (currently on exhibition at The Mattress Factory, Pittsburgh, PA November 14-April 2, 2009) features new works by six international artists including Takeshi Murata, Paper Rad, Gretchen Skogerson, Antoine Catala, and Brody Condon. The exhibition was conceived with a very specific group of artists in mind -- artists who placed both the dysfunction and arrogance of ever-changing technologies at the center of their work. In a sense, these artists are working in the shadow of a technological dystopia (and euphoria) that had begun as early as the Industrial Revolution -- as expressed in the vacant, vectored glances mapped out in Edouard Manet's The Balcony (1868-69) or the absolute pleasure of stop-motion animation in Georges Melies' An Up-To-Date Conjuror

Below, I speak with two of the featured artists in the show, Takeshi Murata and Jacob Ciocci (of Paper Rad) -- we cover everything from readymade software aesthetics to the dream of the perfect collector -- someone willing to take the risk of simply buying an idea.- Melissa Ragona 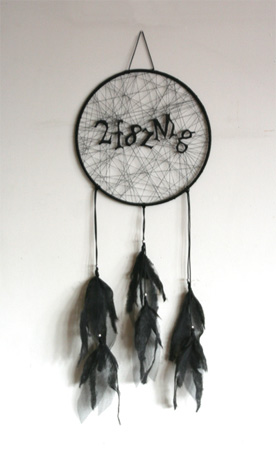 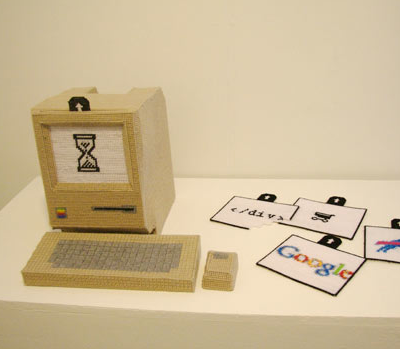 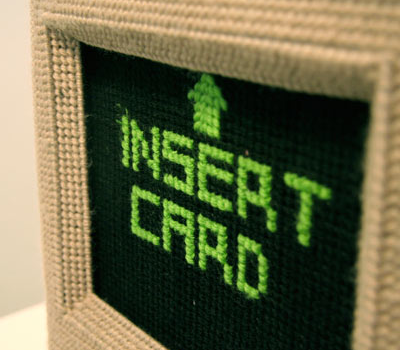 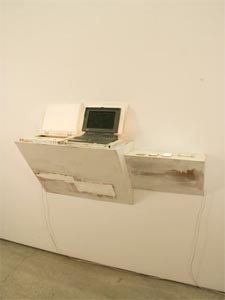 For "Monitor," at New York's Claire Oliver, Brooklyn-based artist Noah Fischer produces a refreshingly rough-hewn body of sculptures that reflect the variegated meaning of his titular product. The monitor here operates at the threshold of objecthood, given both that "we gaze into its pixilated illusion, never directly at its shape and mass" and because the pace of technological development and consumption finds each new screen soon devolving into "e-waste." Boxy, beige monitors congregate in the aptly titled sculpture, Trash Pile, and are shown discarded on sidewalks in some of the black-and-white print-outs comprising wall sculpture Map Installation. Fischer finds a resurgence of Modernist aesthetics in subsequent generations of product design, most notably in those of Apple's laptops and iPhone. With their Judd-esque manufacture and seemingly infinite functions, they market a "sublime promise" all but removed from their production history, as well as from the "global trash cycle." In general, Fischer's sculptures ably marry the tenants of display and the realities of consumption. The crudely painted, triangular shelving of Family Portrait and New Codes could be the unwashed brethren of Steinbach's, the former topped with two wood shells of the new Mac PowerBook. An actual, grandfatherly PowerBook 180 has carved out a seat from one of them, while the translucent screens of an adjacent coterie handheld units glow from beneath. Perfect Lantern makes the reference explicit, as a strip of recessed lighting fills a wood PowerBook's translucent screen, and thus economically stages the condition of immateriality that gives the monitor its unstable nature. - Tyler Coburn