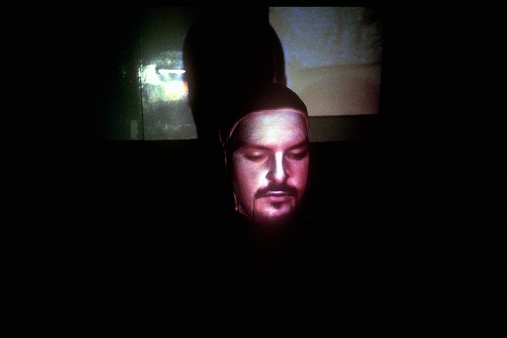 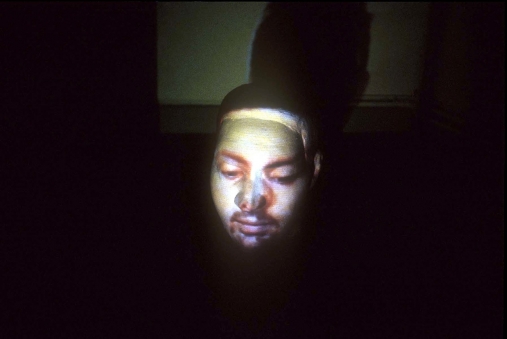 While influenced by the technique of other video artist's such as Tony Oursler, I projected Plato's ancient dialogue, 'Crito', onto casts. The dialogue refers to obedience to the law. When Socrates receives the death penalty by the Athenians, Crito, a friend of his, powerful in Athens, tries to convince him to save his own life and avoid the punishment. The dialogue lasts 40 minutes. 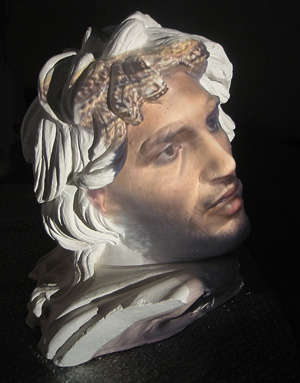 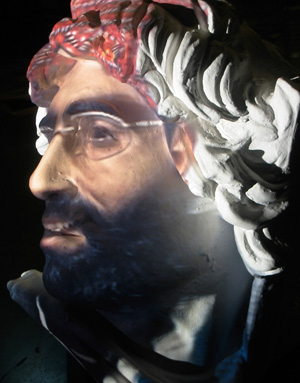 The Dying Gauls are plaster casts of Hellenistic sculptures on which video interviews of young men from Lahore are superimposed. The men are asked about their view of heaven, hell, death and dying.

The casts used here are Dying Gauls. The Dying Gauls were commissioned in commemoration of the victory of the Greek over the Galatians, Celts from Asia Minor. They are part of a larger group of defeated enemies made up of Gauls, Amazons, giants and Persians. Unique in the representations of these Greek enemies is that they are depicted without a triumphing victor.They are seen as defeated but heroic warriors. 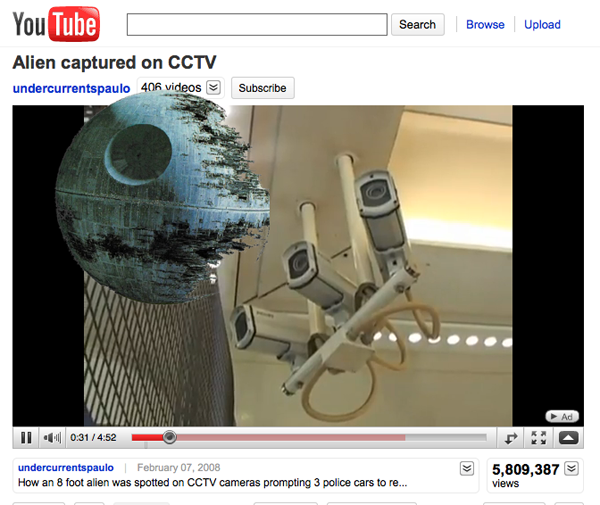 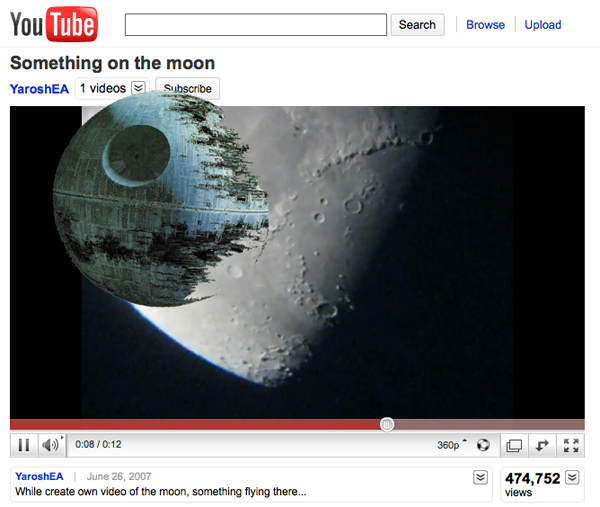 Networked art non profit Turbulence announced two new (sound-related) commissions yesterday - WWW-Enabled Noise Toy by Loud Objects and Moments of Inertia by R. Luke DuBois, with Todd Reynolds. Be sure to check them out - you can read a bit about the works below.

Loud Objects (Kunal Gupta, Tristan Perich and Katie Shima), NYC-based circuit sorcerers, present a wacky way to learn hardware audio programming. The WWW-Enabled Noise Toy invites anyone with a web browser to write their own audio code, program it remotely onto a Noise Toy, and play it live via webcam. In the spirit of “try it yourself” software demos, the website provides a simple environment for experimenting with low-level microchip-generated audio. Load code from the Loud Objects’ own library of performance algorithms, hone your own noise techniques, and add your work to the online archive to share it with other microchip coders and create an open source noise community.

Moments of Inertia by R. Luke DuBois, with Todd Reynolds

Moments of Inertia is an evening-length performance based on a teleological study of gesture in musical performance and how it relates to gesture in intimate social interaction. The work is written for solo violin with real-time computer accompaniment and video. Moments consists of twelve violin études written for Todd Reynolds - ranging from 1-10 minutes in length - each of which uses a different violin performance gesture as a control input for manipulating a short piece of high-speed film (300 frames-per-second) - of objects and people in motion. Taking its cue from principles in physics that determine an object’s resistance to change, the violinist’s gestures time-remap and scrub the video clip to explore the intricacies of the performed action. 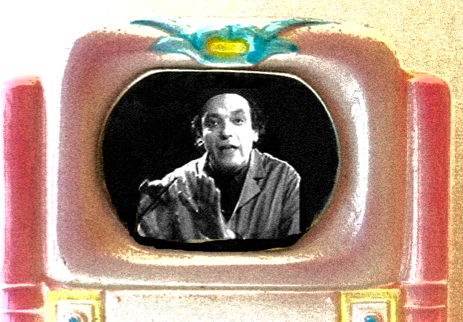 Video artist and community access television personality Jaime Davidovich will host Adventures of the Avant-Garde at the Anthology Film Archives next Thursday, May 13th. Co-sponsored by Anthology Film Archives and Electronic Arts Intermix, the event promises a guided "eye-popping art-historical tour" through 20th century radical art and television, which will be rounded off with a screening of two early video works by Davidovich, INTERIORS (1976) and ADVENTURES OF THE AVANT GARDE (1981). If you weren't able to catch Davidovich's exhibit at Cabinet a few months ago, this evening is another good opportunity to experience Davidovich's showmanship and humor.

After discovering that the Kodak factory in Chalon-sur-Saone, France, was closing its film production facility, Dean obtained permission to document the manufacture of film at the factory with the soon-to-be obsolete medium itself. The 44-minute-long work Kodak constitutes a meditative elegy for the approaching demise of a medium specific to Dean's own practice. Kodak's narrative follows the making of the celluloid as it runs through several miles of machinery. On the day of filming, the factory also ran a test through the system with brown paper, providing a rare opportunity to see the facilities fully illuminated, without the darkness needed to prevent exposure.

Last year I was involved in a project at the Institute of Contemporary Arts, London, called Talkshow, which was a season of performances and events that looked at speech in relation to contemporary art. We were working with a lot of music/art crossover figures like Robert Ashley, Simone Forti, and Joan La Barbara. By way of Talkshow research, I came to see Peter Greenaway’s fantastic Four Composers television series, which was originally broadcast in the UK in 1983, and which included an episode portrait of Meredith Monk. Perhaps I wasn’t looking at it so closely at the time because Meredith Monk was less invested in the speech act and more in the possibilities within the human voice. When I moved to New York in October of last year, I watched the Greenaway film again out of a kind of local interest - a lot of the performances Monk was talking about in ... 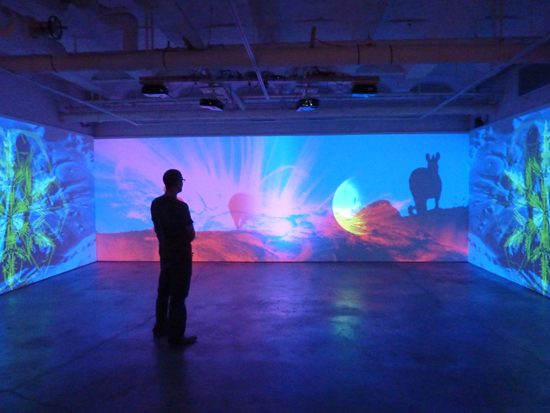 In 1931, Sergei Eisenstein described montage as "an idea that arises from the collision of independent shots" wherein "each sequential element is perceived not next to the other, but on top of the other." This layering of images allows them to combine, producing a third meaning that was not present before their combination. "Ouroboros" - a video exhibition currently on display at the ISE Cultural Foundation - takes the aesthetics of early montage and hits fast-forward in 3D. By modifying a version of chromadepth into a process they call COLORSPACE, art collective SWEATSHOPPE achieves a layered 3D effect in which red, green, and blue (RGB) are each visible at a different depth from the surface on which they are projected. The effect is a complex sequence of images projected simultaneously and layered on top of one another to create an almost literal manifestation of Eisenstein's montage aesthetic.

The sequence combines over 30,000 images selected by artist Ali Hossani, and is meant to tell the story of cosmic evolution, "from the Big Bang to Lady Gaga." The images read more like the infamous montage sequence in A Parallax View (1974) than a statement on the rejoinder of art and science where "knowledge, desire, and energy meets the limits of human freedom," as the artist's statement suggests. Still, the effect is mesmerizing, and showcases one of several new possibilities for 3D technologies in the creation of a new digital aesthetic.