Muhheakantuck - Everything has a Name (2003) - Matthew Buckingham 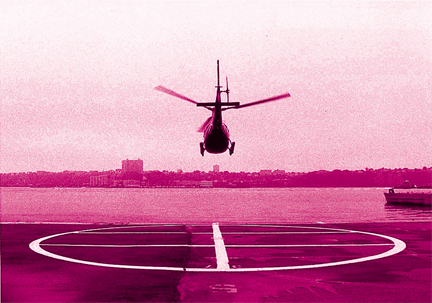 Creative Time presents Matthew Buckingham’s film Muhheakantuck - Everything has a Name with free screenings aboard a New York Water Taxi, navigating the river from Christopher Street to the film’s endpoint at the Statue of Liberty, and back. The 40-minute-long film features a single continuous shot from a helicopter as it traveled above the Hudson River. The film is accompanied by a narration by the artist meditating on the region’s turbulent history, and asks the question, “What role does social memory play in defining the present moment?” ...

Buckingham’s film explores the social and political impact of the relatively brief but violent period of contact between Dutch colonists and the Lower Hudson River Valley’s indigenous Lenape people. By examining how maps are constructed, how places are named (and thereby owned), and what stories are left silent, the film exposes the consequences of Henry Hudson’s journey. Buckingham's narrative reminds us that “The river that became known as the Hudson was not discovered—it was invented and re-invented.”

The film describes how differences between the languages of the Lenape and colonists were integral to how each group experienced concepts of place, but that for all people, maps and other abstractions of place are like histories: condensed versions that contain only shades of truth.

Passengers will board a NY Water Taxi on Manhattan’s West Side at Pier 45. The screenings will take place in the early evening, when the light is low yet still present, allowing viewers to see the river from the windows of the boat—linking the present with the historical narrative of the film.

-- FROM THE PRESS RELEASE FOR THE PRESENTATION OF "MUHHEAKANTUCK - EVERYTHING HAS A NAME" BY CREATIVE TIME ... 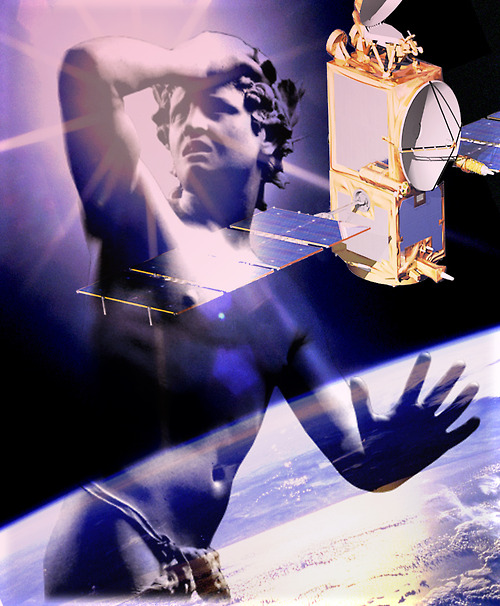 Our narrator remembers that once, with her back turned while facing the Adriatic Sea, a Google Street View car drove by and took a picture of his beloved, who detested being photographed, without her realizing it. Our narrator cherishes this photograph and the entire relationship becomes encapsulated in the screen capture replacing all other experiences and memories. Soon it is not enough. Our narrator cannot imagine that, in a world where everything is recorded, that someone could completely disappear. In daily systematic searches for photographs of the nameless other, Google Street View and Google Earth allow him to move seamlessly through vast detailed three-dimensional space. This extraordinary geographical and social exploration is favored by Google satellite images, user-created 3D renderings of Stonehenge and Machu Picchu and Street View panoramas of favorite vacation spots. As an undifferentiated series of cultural, historical and contemporary symbols float together or follow one another in rapid succession, in a world where Dutch anthropologists discover pre-Socratic fragments on Turkish islands ...

16777216 is a new online work by Richard S. Mitchell, a San Francisco-based artist with a background in video. 16777216 is viewable through the Jancar Jones Gallery's website from August 28th until September 4th, click here to see it. The work consists of over 16.7 million frames, each a color in the RGB color model, displayed at 25 frames per a second. Colors are displayed when the web browser synchronizes with the server, where the colors slowly move from black towards white. 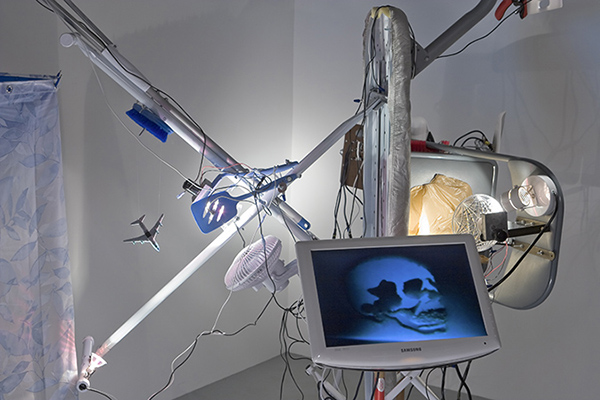 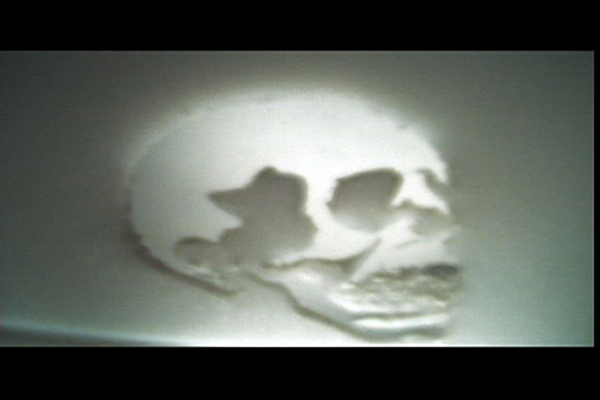 This sculpture generates a three scene narrative with the scene lengths and order controlled by a mechanical randomizing mechanism which is also part of the sculpture. All video and audio switching occurs via mechanical switches.

With this latest work, the Texas-based artist duo breaks new ground in the development of their sophisticated "story-telling machines". Cliff Hanger's narrative is assembled from five separate scene-generating contraptions that output timed segments of a choreographed black and white "movie". The atmosphere of their work is akin to Ansel Adams and Hiroshi Sugimoto photography imbued with early David Lynch film noir.

The creation of these works is a collaborative process between the artists: Shore develops the mechanics and the set-scenes, while Fisher programs the microchips and composes the soundtracks using original compositions, digital audio samples and mechanically operated instruments. The combination of all these elements results in a poetic complexity that is both surreal and cinematic.

-- DESCRIPTION FROM THE MCCLAIN GALLERY 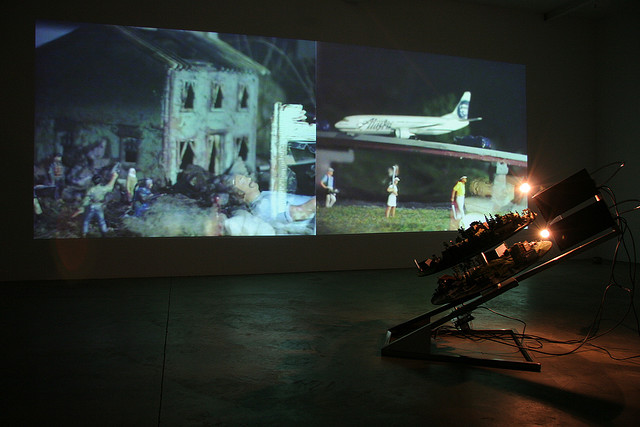 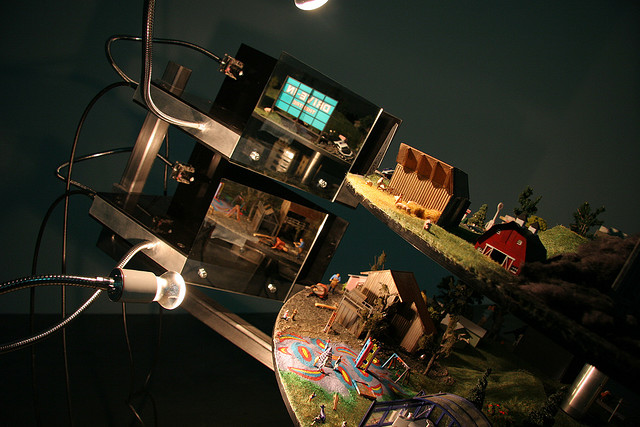 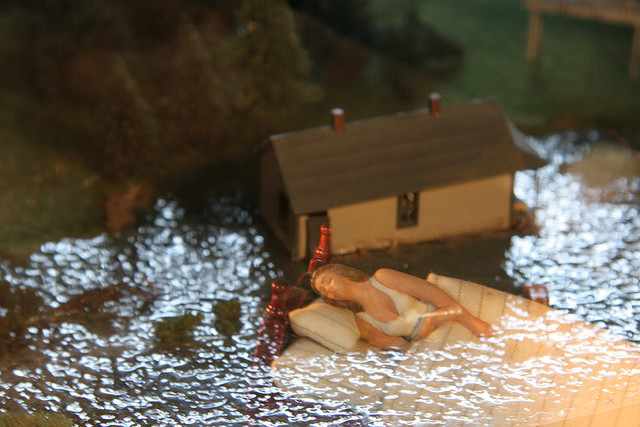 Dream Sequence is a two-channel video installation in which a series of dream images from Jenn and Kevin respectively are seen rotating over our sleeping heads.