Poor Media on Demand: All the files of Printed Web 3

Printed Web 3 is currently featured on the front page of Rhizome.org as a browsable Apache directory.

Earlier this year, I announced an open call for the third issue of Printed Web, a semi-annual publication dedicated to web-to-print discourse. I received a stunning array of files from recognized artists like Olia Lialina, Kim Asendorf, and Clement Valla, but the real beauty of the open call was connecting with a new group of people working with material found or created on the web —147 contributors in all. A particularly diverse view of networked culture formed on my desktop through an accumulation of notes, attachments, tweets, and downloads. Gathering this community around Printed Web was immensely satisfying for me, and I wanted to include every submission in the issue — but having received hundreds of PDFs, JPGs, PNGs, and GIFs, the logistical challenges to this have been considerable.

My intention had always been to publish all of the files received in a single print edition, but as submissions poured in, I decided that “scattering” the material across different networked versions would allow the project to occupy multiple apositions in a way that suited its multiplicitous content.

On the Front Page: Vince McKelvie 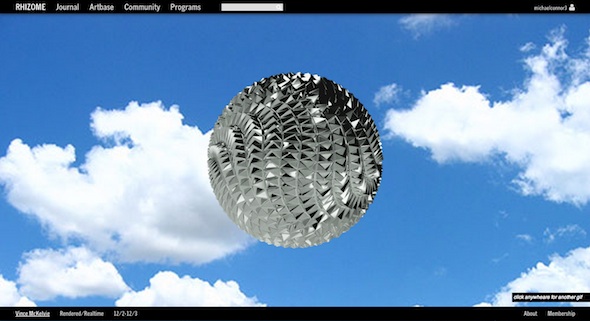 On December 2 and 3, Rhizome will present Rendered/Realtime, a series of 24 interactive animations designed and developed by Vince McKelvie. The works are displayed on the front page of Rhizome.org, occupying most of the browser window save for a minimal header and footer. Created specifically for this context, Rendered/Realtime uses a technique adapted from video game graphics, the sprite sheet, to allow the user to rotate, move, and deform rendered animated gifs in real time. Rippling and undulating, riffling and turning inside out, McKelvie's 3D forms defy easy visual comprehension, landing somewhere in between liquid geometric abstraction and sci-fi fantasy.