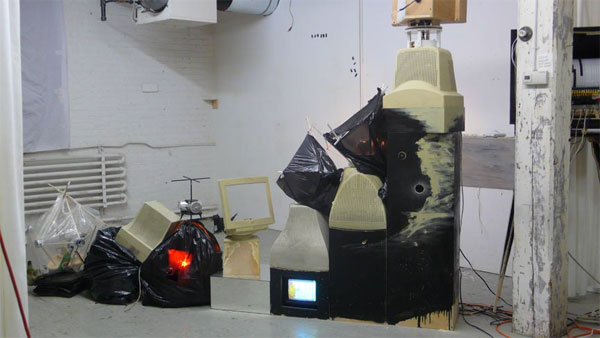 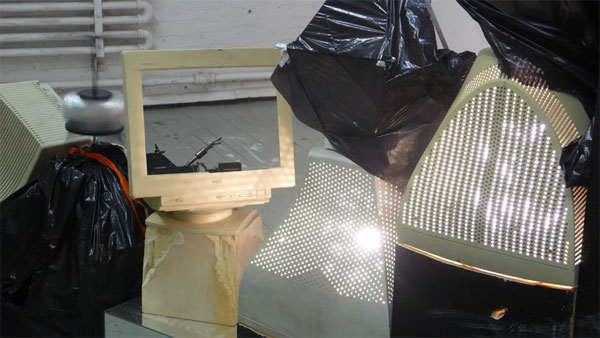 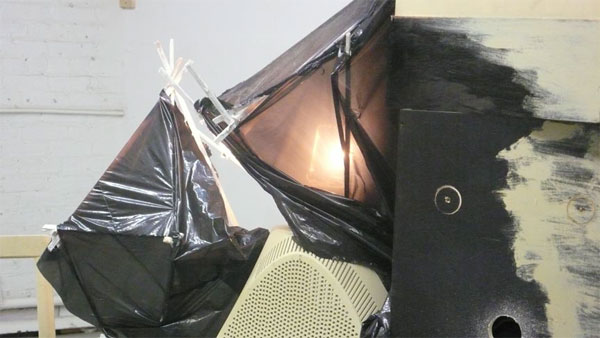 The object that we call “monitor” is at once ubiquitous, obsolete, and in the end, perhaps a non-object because we gaze into its pixilated illusion, never directly at its shape and mass. Today the beige boxes adorn sidewalk trash piles because their cathode ray tubes have recently given way to the solid-state flatscreen. In a backwards alchemical shift, they have morphed from object of desire into “e-waste.” In this sense, they now monitor the speed of consumption.

-- DESCRIPTION FROM THE PRESS RELEASE FOR "MONITOR" AT CLAIRE OLIVER GALLERY

As I observed before, this decade is marked by atemporality. The greatest symptom of this is our inability to name the decade and, although commentators have tried to dub it the naughties, the aughts, and the 00s (is that pronounced the ooze?), the decade remains, as Paul Krugman suggests, a Big Zero, and we are unable to periodize it. This is not just a matter of linguistic discomfort, its a reflection of the atemporality of network culture. Jean Baudrillard is proved right. History, it seems, came to an end with the millennium, which was a countdown not only to the end of a millennium but also to the end of meaning itself. Perhaps, the Daily Miltonian suggested, we didn't have a name for the decade because it was so bad.

-- EXCERPT FROM "A DECADE IN RETROSPECT" BY KAZYS VARNELIS


It's time for my promised set of predictions for the coming decade. It has been a transgression of disciplinary norms for historians to predict the future, but its also quite common among bloggers. So let's treat this as a blogosphere game, nothing more. It'll be interesting to see just how wildly wrong I am a decade from now.

In many respects, the next decade is likely to seem like a hangover after the party of the 2000s (yes, I said party). The good times of the boom were little more than a lie perpetrated by finance, utterly ungrounded in any economy reality, and were not based on any sustainable economic thought. Honestly, it's unclear ... 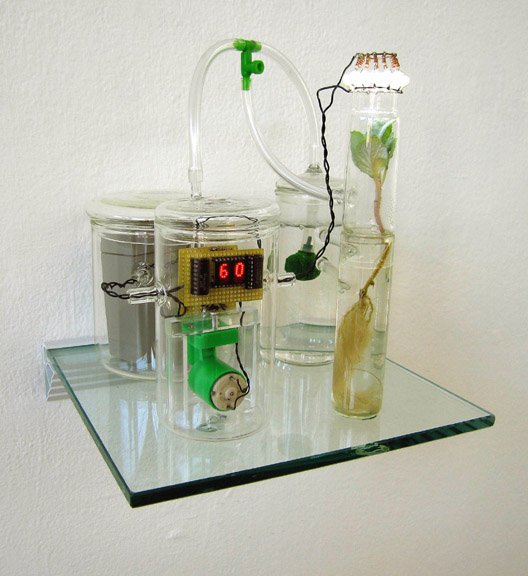 Junior Return is a set of glass capsules that provide a miniature, computer controlled hydroponic environment; the plants’ roots are submerged in nutrient-infused water, while LED lights supply the illumination required. These pods are tethered by electrical wire to a battery pack that supplies the energy for all of the plan's requirements. A digital timer counts the seconds that remain until a small pump is activated, briefly moving air to the plant and the water that bathes its roots. Then, with little notice, a few bubbles appear in the water, the only resolve of the anticipation.

The system keeps its enclosed plant in a dwarf state by supplying only enough resources to survive but not thrive. I kept a broccoli seedling alive for almost three years using this technique, and wanted to formalize this behavior in a device. The plant in this container could flourish in the most meager of environments, but would also be invisible to us in significance and aesthetic consideration. 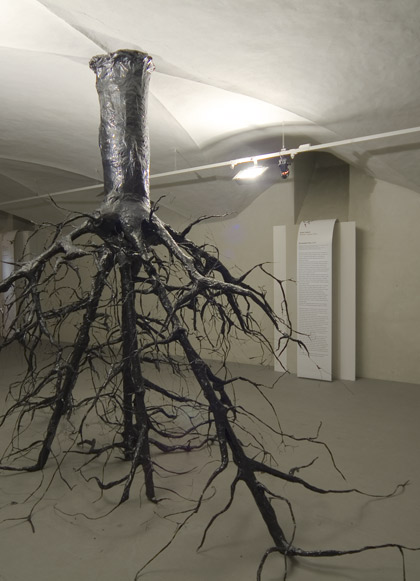 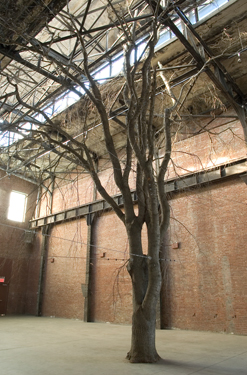 For one art, Gallaccio will fell and disassemble a tree and then reconstruct it with all the engineering required to support it visible. The tree, a weeping cherry killed when contractors erroneously cut its root system, will reach into SculptureCenter's fifty-foot-high clerestory, virtually filling the space with its branches. Viewers will enter the space under its branches and will only be able to apprehend the full tree when standing at the far end of the gallery fifty feet away.

The title of the work is borrowed from an Elizabeth Bishop poem whose subject is loss and the unlikely possibility that we might master it through artful practice. one art is a tree as assisted ready-made, building on the art historical tradition of landscape and grappling with our desire to believe in an untamed nature.

In one art, Gallaccio's aesthetic act is to move the tree from its normal outdoor environment to an urban industrial building adapted as an exhibition space. Yet the process of disassembling and rebuilding the tree transforms it - drawing attention to the extraordinary formal and structural properties of the tree.

Robotic Geese are remote controlled goose robots that enable participants or robotic goose drivers (aka goosers) to interact with actual geese in urban contexts. The robotic goose interface allows people to approach the birds, follow them closely and interact in a variety of ways that would not otherwise be possible without this interface. The goose drivers can 'talk to' the geese, issuing utterances through the robotic interface, delivering prerecorded goose 'words,' their own vocal impersonations, or other sounds (such as goose flute hunting calls). Each utterance via the robotic goose triggers the camera in the robot's head to capture 2-4 seconds of video recording the responses of the actual biological geese. These video samples upload to the public web-based goosespeak database that the participants can annotate, i.e. "the goose was telling me to go away," "he was saying Hi." As this database of goose responses accretes, redundancy and correlations in the annotations may provide robust semantic descriptors of the library of video clips. 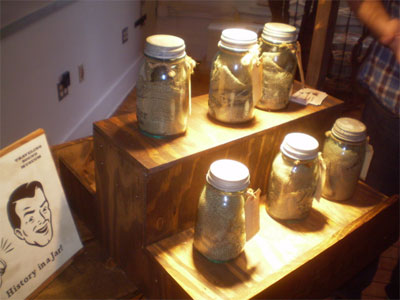 The spring show of ITP, New York University’s Interactive Telecommunications Program, which was open to the public last Sunday and Monday, was a like science fair, with students eager to show the results of their projects, and also like a job fair, with middle-aged men in suits prowling for fresh-faced innovators. There’s an atmosphere of authentic creative exploration surrounding the projects displayed, but more often than not the starting point is a vaguely corporate-sounding buzzword: Sustainability! Wearable technologies! Arduino! Connecting to nature was a particularly hot topic, with variations on it ranging from urban botany—like the iPhone app Twigster that helps users identify species of plant life they encounter in parks—to the New-Age crunch of Root Boots, bark-covered footwear that encourages the wearer to stand still and contemplate nature by providing pleasant, low-frequency vibrations when at rest and making scary uprooting sounds when lifted. Voice from the Past also followed the trend of adapting technology to slow the pace of life down; the program lets callers leave a voice message and designate a time in the near or distant future when the recipient will be notified of it. The inverse of that was the whimsical Traveling Sound Museum, with sounds of events like the 1293 sacking of Jaisalmer by the emperor Ala-ud-din Khilji and the 1835 arrival of European explorers in Galapagos in mason jars displayed on an antique wooden cart. (The creator cagily batted away questions about what the burlap in the jars was hiding, and where they “really” came from.) Other projects let computers and audience share the credit for art-making. The “cobots” ShadowBot and SoundBot moved in response to environmental light or noise, respectively, to create messy, Spirogram-like doodles. With the heavy crowds at the ... 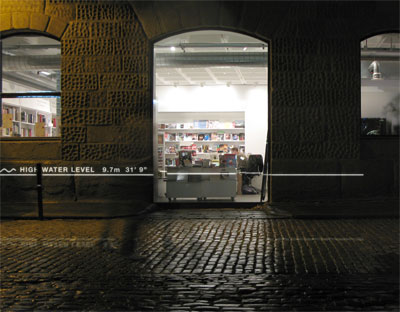 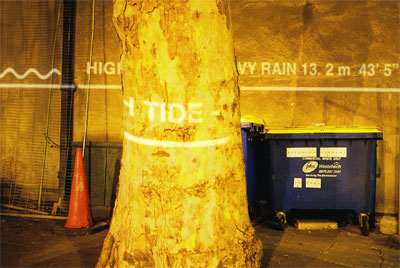 Sea levels are rising due to climate change... but how much could they rise and how quickly? And how could this affect the city of Bristol?

Watermarks is a public art project that will use a series of large-scale projections at sites across the centre of the city to explore these questions.

Flood level marks will be projected on to the sides of buildings, showing how high water levels could potentially rise as the sea inundates the central, low lying areas of Bristol. By displaying these levels in real space, the project aims to help us to imagine the depth and extent of this potential future flooding - allowing us to measure them against ourselves in familiar environments.

The complexity and inherent uncertainty involved in predicting sea level rise means there is little consensus across the global scientific community as to how much sea levels could rise in the coming decades. The Watermarks project will use current UK government predictions for the next century to set key flood mark levels.

Reaping What You Sow

Artist/designer Amy Franceschini's newest project updates an old idea with continuing social resonance. Her Victory Gardens initiative is an effort to get people growing more of their own food, "for increased local food security and reducing the food miles associated with the average American meal." Not unlike Cat Mazza's Stitch for Senate project, which draws on WWII-era programs to keep people calm about the war and supportive of the troops abroad (in this case, through "charitable knitting"), Franceschini's project spins paranoia about food security and emergency preparedness into a creative community-building strategy. In collaboration with the San Francisco-based organization Garden for the Environment, Victory Gardens facilitates the growing of shared local gardens in the name of urban sustainability. The idea germinated in 2006, when Franceschini made it the focus of her SECA Award installation at the San Francisco Museum of Modern Art. Growing the venture in new directions each year, in 2007 a related book featuring essays by Lucy Lippard and Mike Davis was published by Gallery 16. This year the art project blossomed from a city unification initiative into a full-fledged social networking site! The Garden Registry is an interactive map of "food production zones" through which other victory gardeners can connect with each other, share tips on working organically, and contribute to "an important portrait of land use." The site launched this week and is calling for participants to upload their information. Meanwhile, Franceschini offers potential Bay Area gardeners a tricycle-delivered Starter Kit to get growing. As outlined online, the accoutrements and their delivery mechanism perfectly resemble the spirit of other projects by Futurefarmers, the art and design collective founded by Franceschini with the goal of "making work that is relevant to the time and space surrounding us." - Marisa ...