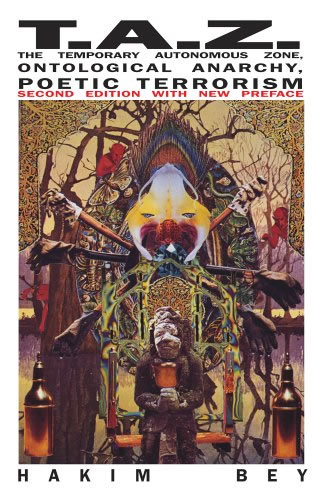 The TAZ may have remained a fringe work if it wasn’t for “cyberculture,” which proved among the more resilient memes in alternative art and culture from the mid-1980s to the mid-1990s. The original electronic networks that became the prototype for today’s commercial Internet were developed in the 1980s, a development of the first interconnected computer channels produced in the 1960s for US military purposes. As François Cusset summarizes: “These networks embodied, for some, a space for resistance, a social dead zone, a territory that was still imperceptible, in whose shelter they could build a new community and undermine the ruling powers … the first groups of hackers emerged [forming] in Bruce Sterling’s words, a veritable ‘digital underground’.” In cyberculture’s incandescent popcult moment, the gritty noir futures of cyberpunk science fiction, built upon the template forged by the ascending reputations of novelists William Gibson and Sterling, and extrapolated from present-day technological developments, were cited as metaphoric portrayals of a real world in thrall to the nascent Internet and to the implications for mediated life it held. Cyberphile magazines like Mondo 2000 (and later, Wired and 21C) spliced cyberpunk attitude with digital culture’s bleeding edge, carrying advertisements for dialup modems, CD ROMs and pixel-art software in between articles and interviews exploring every facet of cyberculture: From body modification to the emergent politics of the net, from new strains of cyberpunk fiction and rave music to the “bumper sticker libertarianism” leaking from cyberculture’s startling new cachet.

Fermented within this heady “frontier” atmosphere, manifestos were abundant. John Perry Barlow of the Electronic Frontier Foundation drew up a Declaration for the Independence of Cyberspace, demanding that the net – “the new home of Mind” – be forever self-governing, forever free from corporate and governmental restriction. Douglas Rushkoff produced a book-length vérité document ...