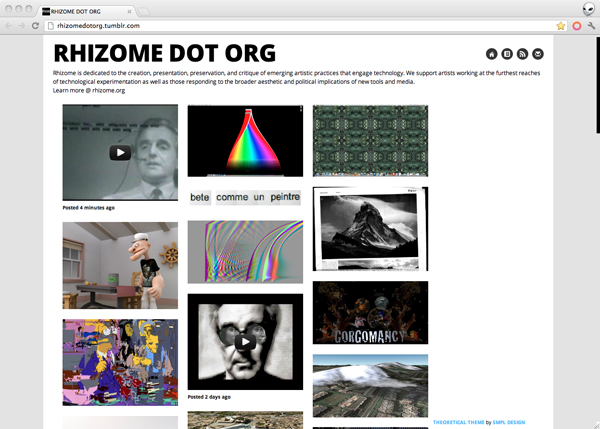 We're pleased to announce that Rhizome is now on Tumblr! Over the last 16 years, Rhizome has amassed an incredible collection of images, videos, and more from memebers of our community. On RHIZOME DOT ORG we we'll bring to light this great content and more right to your dashboard. 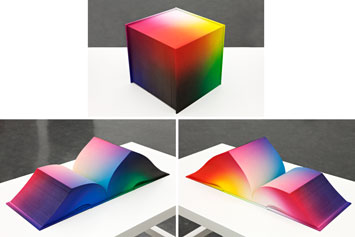 I once heard Leon Botstein, the President of Bard College, compare books to stairs. “They’ve invented the elevator,” he said, “but sometimes you still walk up.” There are countless discussions on the future of the book—they are picked up in magazine feature articles, in trade conferences, and in academic roundtables—and in all of these, the future of the printed word seems certain: in a generation or two, print will become obsolete. In this age of changing habits, if print is the stairs and screens the elevator, then what could the escalator be?

This moment in time, and the awareness of the possibilities electronic publishing grant, affect the manner in which we relate to texts in a way that is under constant scrutiny. But images prove to be a different problem. The separation between text and images has a long history. In fact, images have posed a challenge for publishers from the early days of print—be it the cost of printing them; the payments for illustrators, photographers, and designers; or simply contextualizing the images and their relation to the text—but they have become crucial to our understanding of texts. When the Illustrated London News, the world’s first illustrated weekly newspaper, began publishing in 1842, the relationship between the text and the engraved images in the paper was such a novelty that it took the weekly about a decade to stake a hold in that era’s news distribution channels. Once it did, it became one of the most widely circulated newspapers in Victorian Britain. The marriage of text and the engraved image marked a new level of fluency in communication via images, which does away with staples of early print day, even though the separation between image and text lasted for many decades later, and can still be traced today. (Think, for example, of the plate pages, where color images were glued onto the paper, so that the book or magazine would be printed in black and white, adding the color pages later in a way that saves money on printing, but also generates a wholly different relationship with images. These are often associated with encyclopedias, but a large number of artist’s monographs retained this design even after color printing became widely accessible, creating the odd text-image relationship where an artwork is described to the most minute detail, with a comment in parenthesis directing the reader to “color plate 3,” where the mentioned piece could be seen in glossy print.)

The generations to come of age in the days of digital publishing and reading on screens have a much more complicated relationship with images. The human eye-brain system is capable of reading a large number of high quality images in a matter of split seconds, and this, alongside the hand-eye coordination—think about the pleasure of a touch screen versus inky newspaper pages—is rapidly developing to mirror our changing habits of consuming information. So much so that the contemporary heightened sensitivity to the way we read images can lead to an ability to, at times, ignore the quality of the images when inserted into a text, the way our brain glides over a typo in the flow of reading. The way we read images online is only one thing these magazines deal with in the process of publishing, but it is surely an element that dictates a large portion of the reading experience of these publications.

Revolutionary Convergences: History and Symbolism in Anonymous and OWS Art

Left: United Nations Officials with an unofficial U.N. flag, 1947, Right: Anonymous members with flags in the UK from flickr, 2008

Anonymous operates under a well-designed logo. Does it belie their dispersed identity or siphon power from historical symbols to disrupt our own associations to them? The aesthetics of past revolutionary movements point more towards the second possibility. We see this link to history in the poster designs of Occupy Wall Street — new digital tools under visual constraints produce an early 20th century screen printer’s aesthetic with formal motifs of the same era.

New technology and historical technique are converging, and so are the symbols being used to deliver the message. The visual traces of current aesthetics draw on the deep roots of history and the powerful associations images and symbols therefore possess, allowing us to make quick associations to the power of the Roman Empire or the strength of the Greek Gods all in a glance at a tiny logo. Turning back to Anonymous —What can we learn by systematically decoding their symbolism? And how do their aesthetics relate to their actions as international and anonymous activists?

Searching for these convergences online often reveals infinite Platonic shades of nearly identical images. But occasionally, if you sift past the first helping of results, you can uncover some remarkable connections.

Born in part from the image boards of 4chan, internet image culture was Anonymous’ early stock-in-trade. But above the rabble of trollish GIFs and dinosaur ASCI art they have developed themselves into a brand. Their logo, which dramatically leads many Anonymous affiliated YouTube videos, is wrapped in screen interference, reminiscent of military surveillance cam signals, and backed by equivalently dramatic classical sound clips. On the AnonOps blog the logo lives in static forms; black and white, ironically layered against a sea of 1s and 0s, and as the favicon... 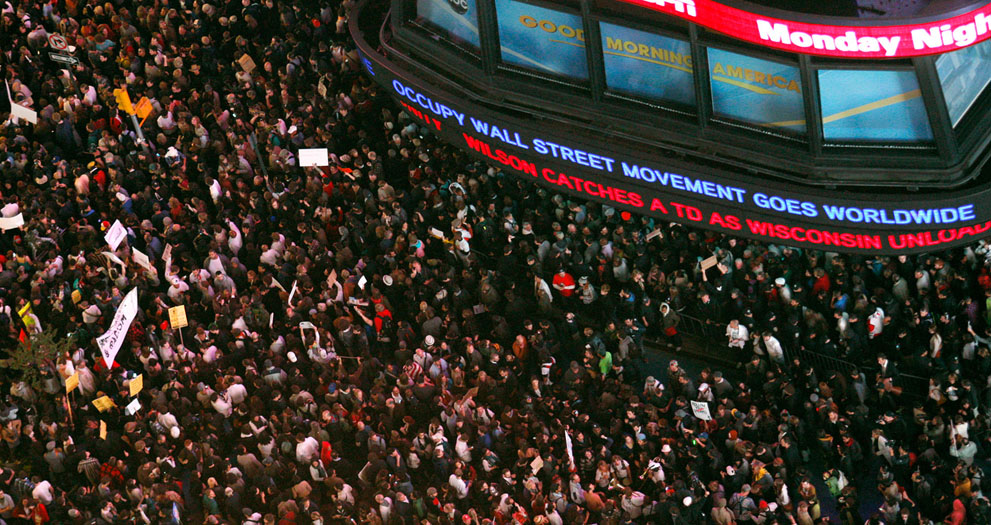 Often the smallest image files on the internet and sometimes created by truncating a much larger image to the 32 pixel by 32 pixel format, the favicon acts as a type of superscript icon hinting at a websites content or intention. If you're an avid bookmarker of sites, like myself, favicons are familiar and offer guidance but rarely get a closer look or the more detailed consideration as a work of art. Fabian G. Tabibian has rescaled favicons from their restricted pixel widths to large-scale desaturated C prints.

His prints cull from a number of sources, but most notably the websites for branches of the United States Government. Somehow the polite vertical American flag favicon on the Senate's website takes on more ominous tones when converted to black and white and printed poster size, confronting you with its deficient resolution. The collection of prints, which were simply mounted on the wall at the Wassaic Project where I encountered them this past weekend, have also been shown in lightboxes mimicking their original screen-lit existence. In either format they present an eerie portrait of a typically unconsidered element of the internet. 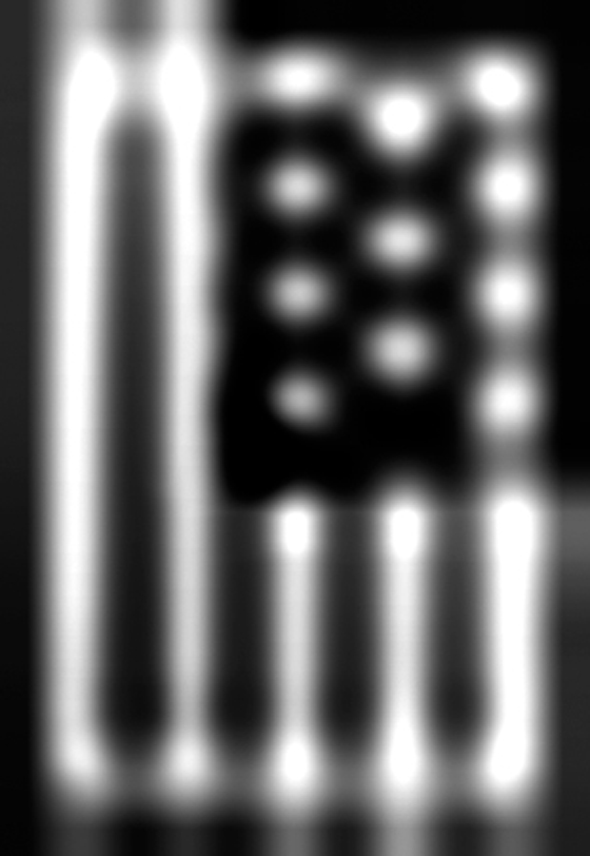 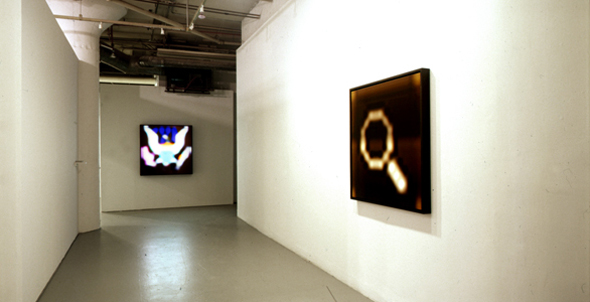 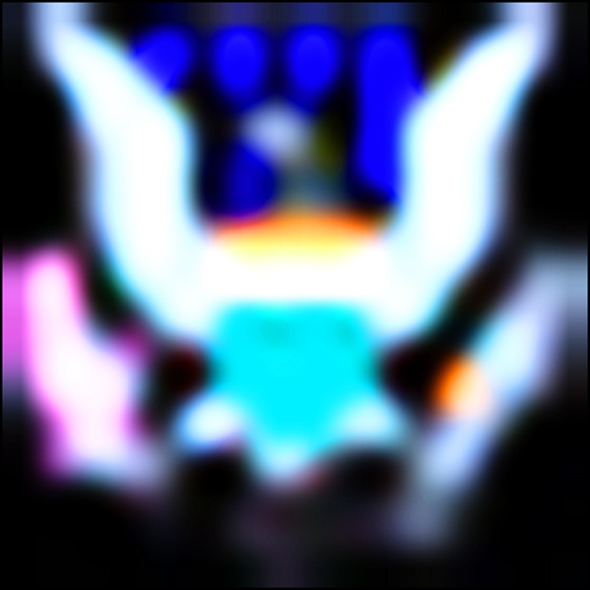 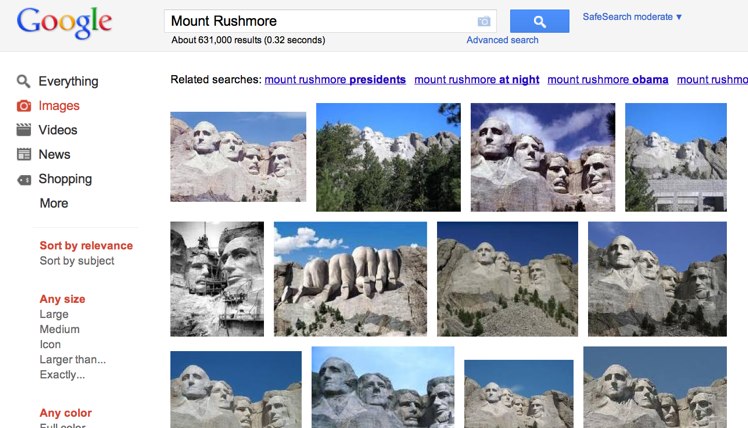