A Studio Visit with LoVid

I had the opportunity to drop by LoVid's (Tali Hinkis and Kyle Lapidus) studio at Smack Mellon in DUMBO this week, where they were awarded space for the 2009 cycle of their Artist Studio Program. In their work, LoVid hack and manipulate video in a myriad of ways -- sewing it into quilts, melding it with resin and foam core to make 3D sculptures, integrating live video feeds into the body of other sculptures, altering it in live performance, or weaving the electric wires that transmit video signals into large textiles. Their practice brings the elemental technologies behind video to the fore, while also emphasizing the interactive systems that trigger them. The below photo essay provides a small preview to some of their recent and older works. To see everything they've been up to, be sure to stop by Smack Mellon's Open Studios on Saturday March 20th from 12-6pm, when LoVid will open up their workspace to the public. 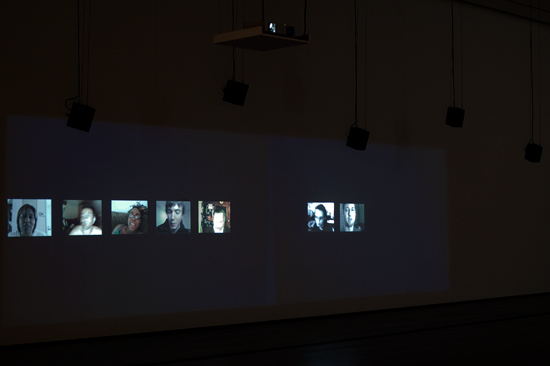 Above: Laid Off from the series "Testament"

Testament is a series of collective self-portraits made up of fragments from online video diaries, or “vlogs”. The project consisted of a series of chapters, each of which focuses on a collectively told vignette, story, proclamation, or meditation on topics such as identity, the economy, illness, politics, the war, or work. Testament explores the formal and conceptual consequences of online video viewing and sharing, while analyzing contemporary expressions of self, and the stories we are currently telling online about our lives and our circumstances. Clips are edited and sequenced like streams and patterns of self-revelation and narrative that flow and dissipate over space and time. As in a Greek chorus, a choir, or a musical symphony, individuals echo, respond to, contradict, add refrains, iterations, and variations, join in, and complete solo narrations. The series reflects on the peculiar blend of intimacy and anonymity, of simultaneous connectivity and isolation that characterizes online social relations.

2010, Francesco Bonami and Gary Carrion-Murayari’s Whitney Biennial, is essentially a Whitney Biennial calibrated for the times: small at 55 artists and altogether humble. This humility, and the fact that one needn’t contend with an overwrought curatorial concept, allows viewers a more cogent experience than past, sprawling, thesis-driven Biennials could offer. Several works, rooms and motifs make good impressions. Not many are impressive enough to make an indelible impact—but a few are. Judging by the past couple decades, the task of this biennial of American art seems insurmountable, and there is no urgency to fault this edition for hitting the target and missing the bulls-eye. While the levelness here is exciting as an indicator of a playing field for post-boom artistic production, the devil’s advocate wonders, perhaps unfairly, if there isn’t something ultimately more exciting about a splashy Biennial that fails stupendously.

In the absence of an overarching conceit, why not start with a premise that did precede itself a bit: the third floor as a dedicated space for film and video. Considering the continued expansion of film and video practices throughout the art world, the idea seemed gimmicky at best—easily the curators could fill a floor, but why ghettoize? Then, come February 25, visitors stepping off the elevator and onto floor three were greeted by a tapestry by Pae White, freezing a frame of interlaced wisps of smoke in a vast expanse of fabric. Mercifully this is not a plain LCD screen (as it turns out, the floor showcases a variety of mediums), but as a piece that meditates on materiality, medium and time, it serves as an excellent banner to welcome visitors to the area of the exhibition that is most concentrated on media. The projects therein attending to these matters soar. 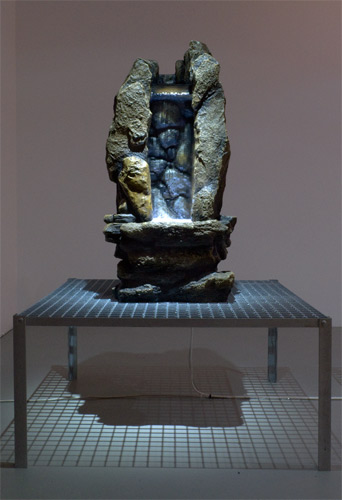 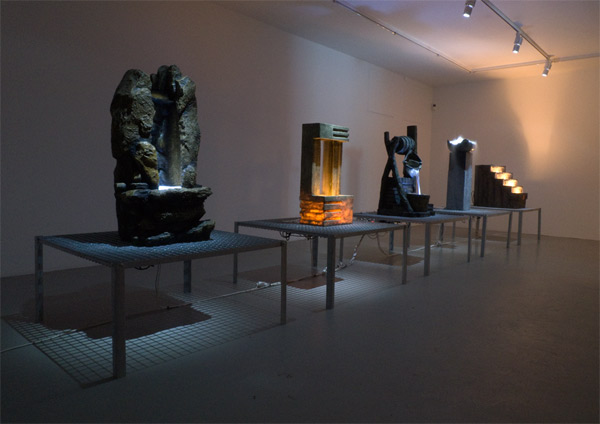 A group of spectacular cast-fiberglass fountains stand together on an elevated server-room floor. A Fit PC 2 (the smallest PC currently available, 96% more energy efficient than a standard desktop) is installed in each water feature. Whenever the fountains are plugged in, the Linux PC's will automatically boot up and run World Community Grid software, a distributed computing project which uses a massive network of PC’s around the world to model solutions for various humanitarian problems, such as: “Clean Energy Project”, “Influenza Antiviral Drug Search”, “ Fight Aids@home” and “Nutritious Rice for the World". The delightful splashing of the water and twinkle of the energy-efficient LED’s act as relaxing and meditative status-light ... 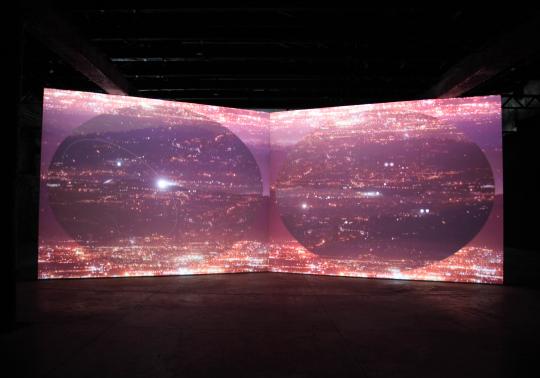 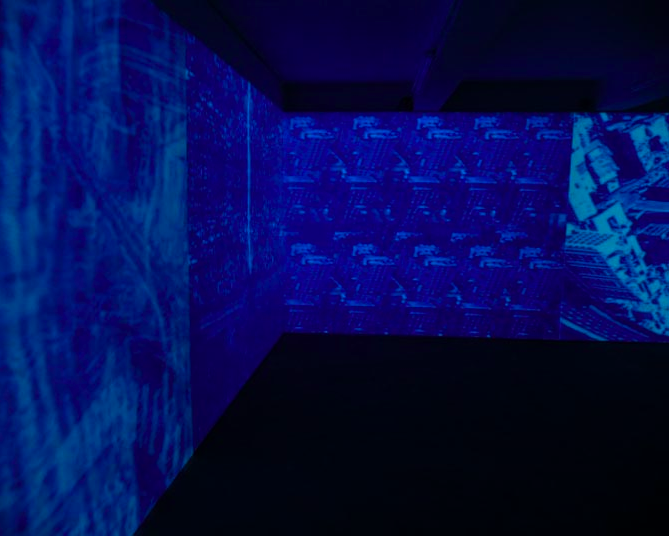 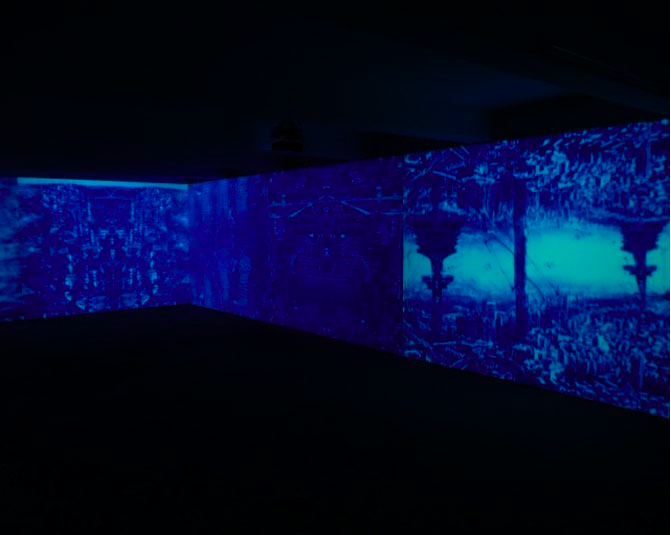 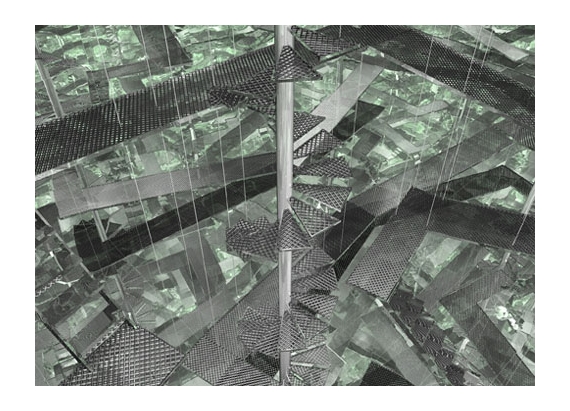 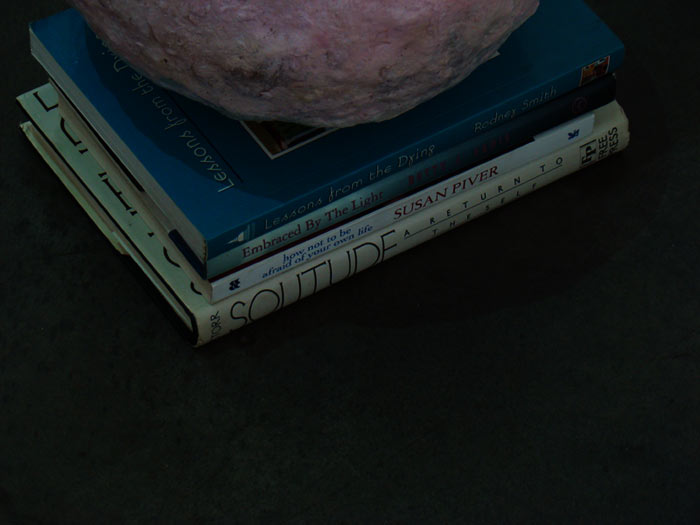 HC Gilje's work arises from a moment when the anything-at-all of digital video was just opening up, thanks to a combination of new real-time tools, cheap computing power, and some key interdisciplinary influences. Drawing on experimental sound and music, improvisation and performance became important solutions; working live in a specific situation, artists would gather, process, generate, and recombine material. In work from the late 1990s and early 2000s, from Gilje and his collaborators in 242.pilots, as well as video ensembles such as Granular Synthesis and Skot, the result is abstract and intense, a flow of layered digital texture. In performance it saturates the body and senses; big screens, big speakers. Instead of the narrative transport of cinema, which takes us somewhere else, this work creates - and is created in - an intensified sense of presence, what Gilje calls an "extended now". This methodology is vital; it focuses the open-ended generality of digital media in to a point: on this, rather than anything-at-all.