Art in Your Pocket 4: Net Art and Abstraction for the Small Screen

"The Facets of Obama" created by Jonah Brucker­-Cohen using the Fracture application by James Alliban, 2011

The devices we carry with us can do much more than simply act as communication tools and entertainment appendages. They can also bring us into a growing world of artistic projects that could have never been imagined without their existence.

The recent boom in creative software for the iPhone and iPad now enables artists to remake existing web projects as iOS apps or use the physical world as a canvas for augmented reality, reimagining our physical surroundings through painting and rendering. In this article, the fourth one in a series that I've written over the past six years of reviews surveying art for the iPhone and iPad, I cover projects that both revive net art pieces that were once only possible on traditional computer systems or in browsers, as well as those that use the iPhone and iPad's sound and camera capabilities to their fullest. 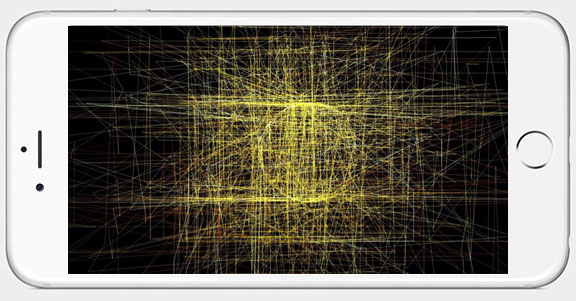 Beginning with abstraction and sound, two works examine methods of sound production through algorithmic composition. Thicket (2011) by Interval Studios (programmer and artist Joshue Ott and composer Morgan Packard) is an amalgam of abstract shapes and patterns that engage with touch-based interaction, visual stimulation, generative pattern creation, and mesmerizing sound transference. The original version of Thicket, or Thicket:Classic, feels like a musical masterpiece on the edge of a high precipice. As a user changes the orientation of their phone in four directions (up, down, right, left) the onscreen graphics shift to new modes.

My favorite mode in Thicket:Classic is "Hairy Circles," which features menacing yellow-orangish circles of tangled lines that correspond to each finger's touch and shift when dragged around, creating a machine-like beat that evokes an industrial assembly line. Ott explains, "Thicket uses a bunch of different algorithms—for both audio and visuals. The aesthetic came from repeated experimentation and rapid prototyping of modes. Sometimes we would start with the visuals, sometimes with the audio, but there was often a back and forth process of each of us adjusting our part until we both liked the results."