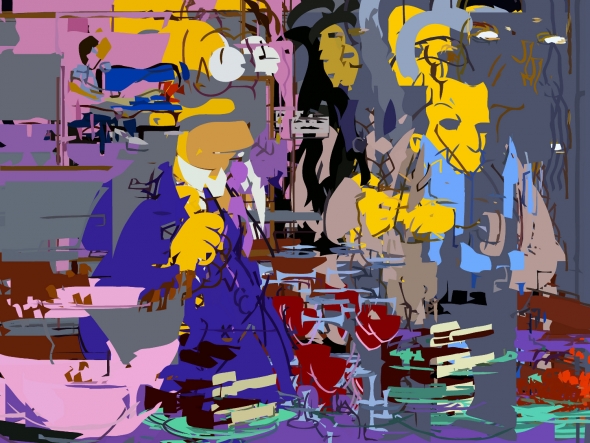 You seem to be preoccupied with the viral spreading of your work (in your website, under the social media “like” count, you wrote “Seeing these numbers rise is my drug.”) Why is this such an important consideration to you?

For me, the number of likes/+'s/mentions/views are the closest thing I have to renumeration for work that is currently difficult to commodify. The means in which we are able to sell digital work is still very much loose and up in the air. I can take solace in these numbers. Know that the work is reaching people, even if the specific metrics are a fools game, an addictive comparison mechanism where the only impossible successful outcome is a continual rate of increase.

Is the possibility of the rapid spreading of your work one of the reasons you choose new media or video as a medium for most of your works?

It's less about rapidly spreading my work than about the possibility of widely spreading it. And cheaply. My technologically formative years were in the 90's when the internet was revolutionizing the idea of ubiquitous publishing and communication. We were using modems measured in baud, emailing around a tiny video of a cg dancing baby, not streaming the latest feature-length film wondering if a single service was going to have 1 billion active users. The 90's were a transitional period, and I think we're in another one (yes, yes, we're always in a transitional period). But unlike the technological idealism of the 90's led by thinkers, tinkerers, and artists, we seem to be in a confusing "what the fuck just happened" period where we're scared/uneasy/apprehensive about where technology may be leading us ...