Music in the Corporatocene (It's a Shame)

In 1996-1997 the artist duo Komar & Melamid hired professional polling companies to conduct a worldwide survey of musical tastes. Based on the averaged results, they partnered with musician Dave Soldier to create "The Most Wanted Song" (described as "Celine-Dion-esque") and "The Most Unwanted Song" (bagpipes, children's choir) in the world. This project, part of their series People's Choice (which included a net art commission for the Dia), was at once an earnest attempt to better understand mainstream aesthetic tastes and an ironic statement about the absurdity of trying to quantify those tastes via statistical averages. 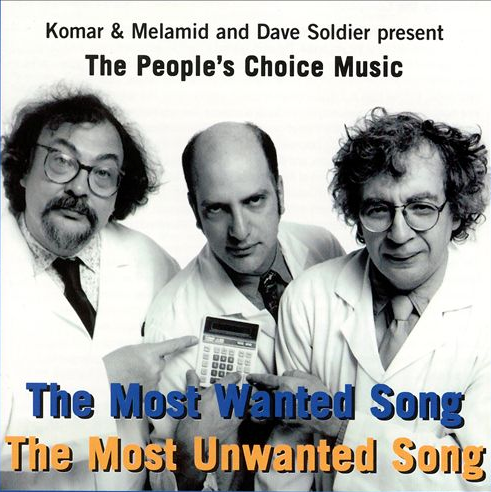 Cover art for The People's Choice Music by Komar & Melamid and Dave Soldier.

In April 2015, a group of British biologists published a study in The Royal Society journal that similarly compresses musical trends into data, in this case applying much more technology and much less humor. In the survey "The Evolution of Popular Music: USA 1960-2010," Matthias Mauch, Robert M. MacCallum et al. analyze the chord and tone patterns of 30-second clips from over 17,000 songs appearing on the Billboard Hot 100 chart within that 50 year period, applying, according to them, a similar approach to paleontologists examining the fossil record. Besides giving insight to pop history, they hope to point "the way to a quantitative science of cultural change." Why, the researchers ask, can't musicology be more like evolutionary biology?

The study makes several claims about musical trends, such as that there have been three major music "revolutions" since 1960: a big spike in 1991 and two smaller peaks in 1964 and 1983. There were also lulls: 1986 was the least diverse musical year they identified, which they attributed to the introduction of drum machines and synthesizers. And in terms of major movements over that whole time span, they discovered, lo and behold, that "rise of RAP and related genres appears […] to be the single most important event that has shaped the musical structure of the American charts."