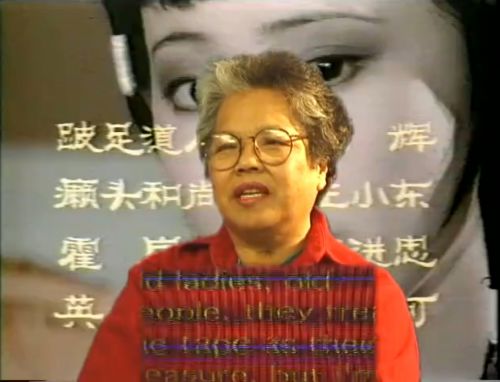 Lana Lin’s work, on display at Gasworks in London, confronts us with a number of topics: translation, identity, cultural production, and familial reflection. In doing so, her films seek to destabilize our assured hold on what we imagine we understand. In Taiwan Video Club (1999), Lin presents a Taiwanese subculture that records, trades, and holds dear, video recordings of miniseries that are shown daily on television. As we watch a participant in this practice explain her life with her collection of recordings, Lin cuts in clips and sound from the series, providing insight to a specific time and place, not to mention a specific medium which dominated it. As we come to understand this unit of Taiwanese pop-culture, Lin engages in a running commentary of sorts, provided through visual metaphors and homonyms.

Recording from TV to VHS could be seen as an apt analogy for the process of translation and cultural production that Lin seeks to examine. The final “product” in each case is a copy of the original, inevitably tinged by the process. As anyone who has spent time battling with VHS can tell you, no copy is ever pristine; there remain in the copy the battle scars of mediation: warped sound and image, deterioration of picture, the familiar markings of “CUE”, “STILL”, and “CH-3” all mark the material as part of a process and mode of production unique to video. The lens of Taiwan Video Club operates as a check on the lens of the viewer. Though we come to understand a great deal about this world of VHS-naughts, and Taiwanese daytime television, Lin maintains a field of formal intervention never lets us settle on any one interpretation of what we see.