Originally via today and tomorrow 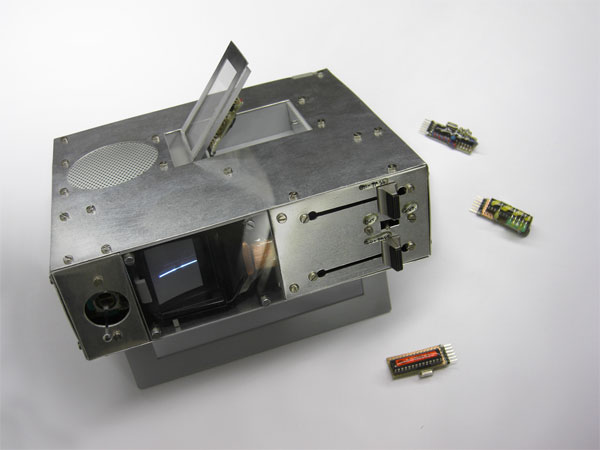 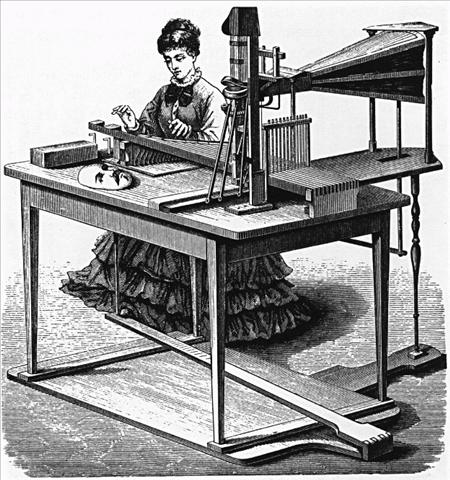 Media archaeology is an approach to media studies that has emerged over the last two decades. It borrows from Michel Foucault, Walter Benjamin, and Friedrich Kittler, but also diverges from all of these theorists to form a unique set of tools and practices. Media archaeology is not a school of thought or a specific technique, but is as an emerging attitude and cluster of tactics in contemporary media theory that is characterized by a desire to uncover and circulate repressed or neglected media approaches and technologies. Its handful of proponents -- including Siegfried Zielinski, Wolfgang Ernst, Thomas Elsaesser, and Erkki Huhtamo -- are primarily interested in mobilizing histories and devices that have been sidelined during the construction of totalizing histories of popular forms of communication, including the histories of film, television, and new media. The lost traces of media technologies are deemed important topics to be excavated and studied; "dead" media technologies and idiosyncratic developments reveal important themes, structures, and links in the history of communication that would normally be occluded by more obvious narratives. This includes tracing irregular developments and unconventional genealogies of present-day communication technologies, believing that the most interesting developments often happen in the neglected margins of histories or artifacts.

On gaming, gear, and tech sites across the net one can find threads asking users for ratings and approval on their equipment. A simple search for "rate my rig", "rate my setup", "rate my collection", "rate my gear" will return hundreds of these images and videos. From snapshots of elaborate home entertainment centers to short videos displaying one's own modded gear, a sense of pride and showmanship pervades throughout. The threads and video clips speak to the social and performative nature of collection, as well as a competitive consumerist drive, and offer a glimpse into the lives, homes, and obsessions of geeks of all kinds. 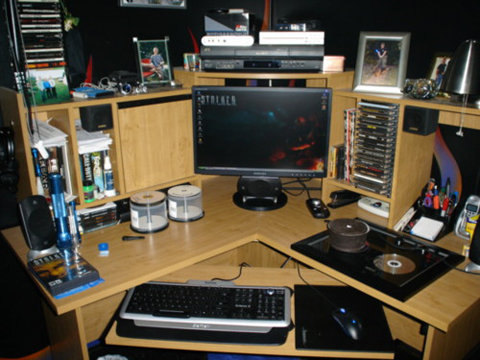 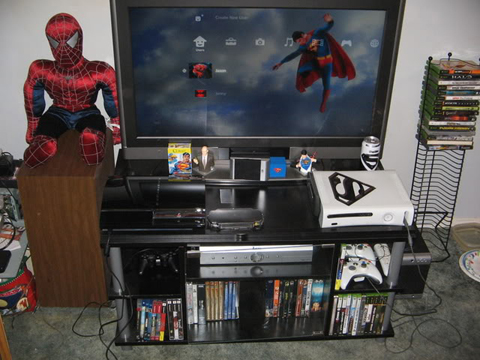 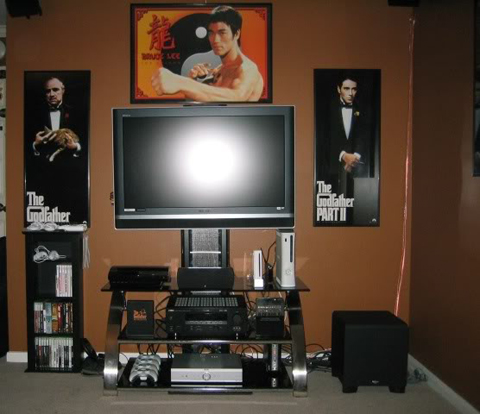 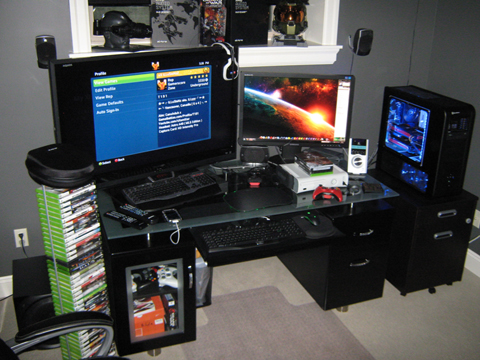 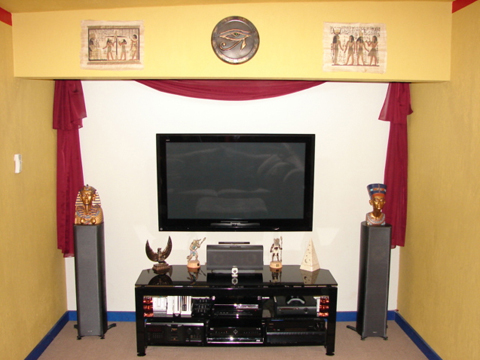 The ambient noise of common machines and the unexpected sounds that come from familiar objects have been a part of music for some time, but over the last fifteen years French artist Céleste Boursier-Mougenot has been joining the two, using instruments and objects to construct complex, apparently self-sufficient systems that play music without any beginnings, endings, or performers. Videodrones (2001) isolates and amplifies the hum that all video signals make when hooked into audio systems. From Here to Ear (1999) now showing at the Barbican in London, is an aviary that resonates when its finches alight on electric guitars. In Harmonichaos, which was on view at Paula Cooper Gallery until this weekend, Boursier-Mougenot affixes the grooves of harmonicas to the mouths of vacuum cleaners, and the staggered grid of thirteen pairs produces an undulating, reedy drone.

The set-up of Harmonichaos could only be the product of a playful mind, even though its appearance deflects suggestions of human involvement. Both the vacuums and harmonicas have an assembly-line sameness, and while they perform according to design, their functions have been diverted away from the needs for clean homes and entertaining song that they were intended to meet. As a viewer and listener, you're made to feel like a confused outsider: a system of switches modulates the intensity of the air flow, as well as the sound emanating from the vacuum cleaners, but it's nearly impossible to identify the source of these fluctuations. False clues are sent by a randomized blinking of bulbs on the vacuums' bodies. As usual, Boursier-Mougenot brings a sense of humor to his work, from the irony of the hokey harmonica becoming eerie when forced to drone (like the accordion in the music of Pauline Oliveros) to the punning title. He finds both harmony and chaos in ... 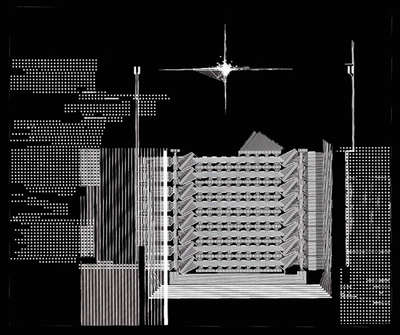 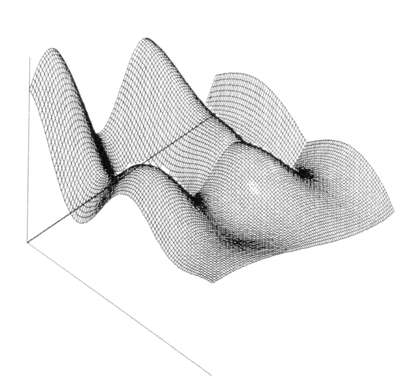 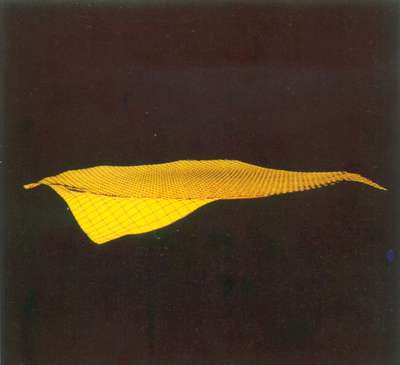 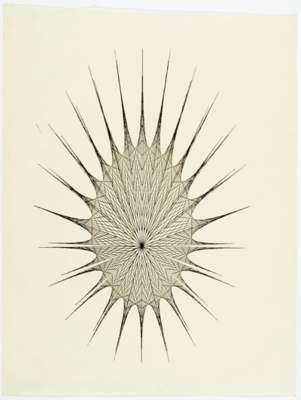 Black and white plotter drawing created on an IBM 360/75, printed on a CalComp Plotter 565 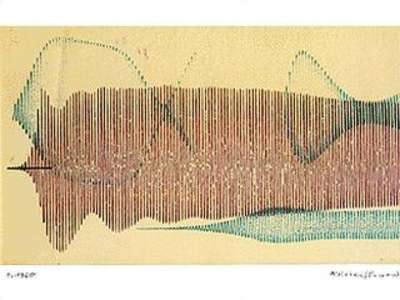 Germany’s first computer graphics were jointly produced in 1960 by the artist Kurd Alsleben and the physicist Cord Passow. They worked on an analog computer which was linked to an automatic drafting unit and transformed parameters of a differential equation into deviations and disturbances.

Via the compArt Database of Early Computer Art