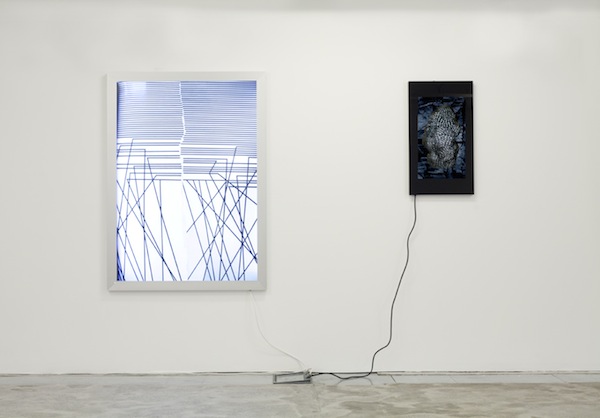 Your recent exhibition at JVA Project Space in London, Photographs and Slide Shows, primarily used LCD screens to both display and constitute work.  These screens are quickly becoming the primary mode of public consumer advertising and there is something about the way the images of your sculptures rotate in their digital non-space that evokes traditional consumer store windows.  What does the use of the visual language of advertising and public display communicate about the nature of your work or your identity as an artist?

I’m not really speaking critically about the language of advertising exclusively. I’m not sure it’s possible to do that without lapsing into a fairly dysfunctional rhetoric. I think within its traditional logic, this visual language functions in my work where it's drawn into conflict by other elements that it struggles to accommodate without having to be addressed. I intentionally want to polarise cliché characteristics, particular to advertising, within a process of trying to articulate other systems of representation in relation to them, such as that of a physical, three-dimensional form in a digital space. For me it’s very challenging to create and maintain a level of heterogeneity among different elements and control how they overlap and resist each other within the same work.

With the LCD screens you’re referring to I see their physical qualities as indistinct from any other quality the work presents as a whole in terms of their potential. I chose them partly because of their ubiquitous presence in the landscape. They have no branding, which in this case would interrupt their relationship to the images. They only display portrait, which interests me in their reference to other, more historical modes of display. They also have tempered glass faces that extend to the very edges of the ...