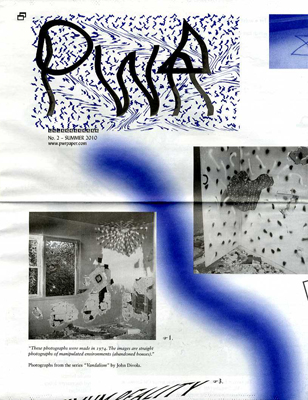 Spread across three tables, publications culled from around the world are surprisingly not rendered dead and embalmed under the vitrine coffin that most library material usually exhibits within, but instead can be found alive and well, waiting to be sifted through and handled. Curated by Rachael Morrison and David Senior, Millennium Magazines features magazines and journals spanning a broad range of subject matter including photography, art theory, design, architecture and social activism. Though diverse, each one encapsulates an experimental future forward ethos driven by an independent small publishing spirit.

The 102 featured publications begin from the year 2000 and feature familiar faces such as Fillip, Mossless, Triple Canopy and Bidoun but also include many burgeoning international winners such as White Fungus, PWR Paper, Institute for Social Hypocrisy and Junk Jet, to name but a few. Included also in the exhibition are monitors showcasing footage of the publishing process.  The show continues online as well, featuring a website with links to each and every exhibited publication.

There is plenty of diversity here and one will surely find something new and refreshing, both content and design-wise.

Millennium Magazines is on view at the MoMA through May 14, 2012.