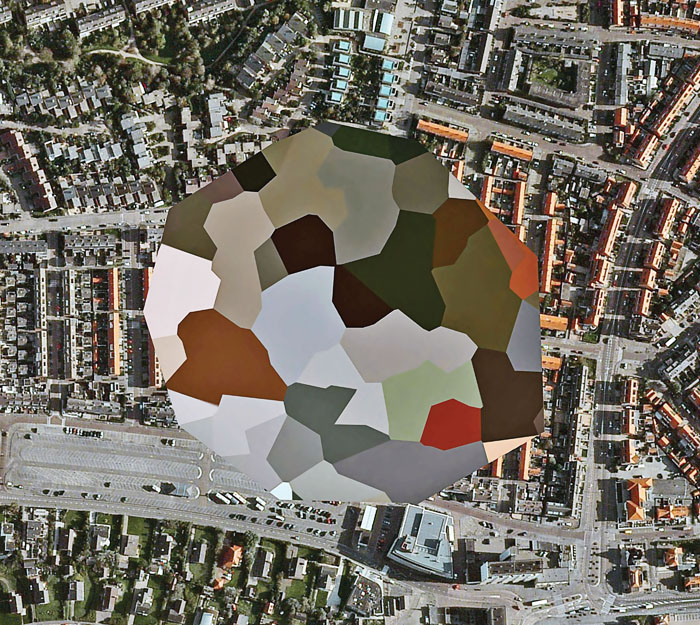 The English artist Mishka Henner has collected the images of the Dutch government's censorship of aerial images showing economic, political, or military locations. Previously, in 2009, the artist Greg Allen utilized these images as subjects for a series of paintings. While most nations take steps to protect sites of interest from being seen on technologies like Google Earth, the Dutch appear to do it with unique flair. The Dutch interventions deploy strategic pixelated abstractions, presumably to more easily blend into the digitally represented landscape. Though they destroy the presumed object of interest, they also create beautiful new impossible landscapes. Says Henner:

Governments concerned about the sudden visibility of political, economic and military locations exerted considerable influence on suppliers of this imagery to censor sites deemed vital to national security. This form of censorship continues today and techniques vary from country to country with preferred methods generally including use of cloning, blurring, pixelization, and whitening out sites of interest.

Surprisingly, one of the most vociferous of all governments to enforce this form of censorship were the Dutch, hiding hundreds of significant sites including royal palaces, fuel depots and army barracks throughout their relatively small country. The Dutch method of censorship is notable for its stylistic intervention compared to other countries; imposing bold, multi-coloured polygons over sites rather than the subtler and more standard techniques employed in other countries. The result is a landscape occasionally punctuated by sharp aesthetic contrasts between secret sites and the rural and urban environments surrounding them.

The technique is reminiscent of the "micropatterns" on military camouflage, which mimic poor-resolution digital photography. "Micropatterns" are not designed to hide soldiers from direct human eyesight. Instead, they allow soldiers to blend more easily into contemporary surveillance images. Yet the Dutch process of landscape camouglage carries other ...