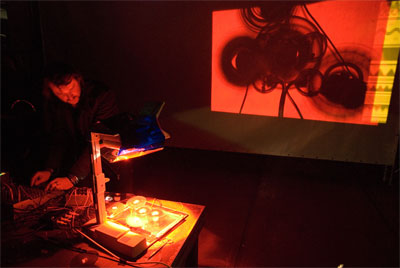 
Video by Brock Monroe
The Icelandic new music ensemble Hestbak formed in 2003 as a brass-heavy improvisation collective. Under the influence of Aki Asgeirsson, who joined a year later, the band began experimenting with interactive technologies and the potential of animated scores to "conduct" performances of their compositions. A group recital last weekend, hosted by experimental folk singer Kria Brekkan at Brooklyn gallery Secret Project Robot saw the execution of several different pieces in which musical instructions, rendered as simple kinetic forms, emanated in real time from a video projector for viewing by both ensemble and audience. Each piece treated the passing of time as a stroll horizontally or vertically across the score, usually with a fixed point designated as the cue for performers to make sound.

Gudmundur Steinn's "Volma" referenced the graphical interface of studio recording software, while Asgeirsson's "Talfall" featured multiple strings of descending numerical values cascading along parabolic pathways. As each number disappeared off the bottom of the screen, a Hestbak member plunked its corresponding note on a piano, enabling a variety of casual rhythms and harmonies. 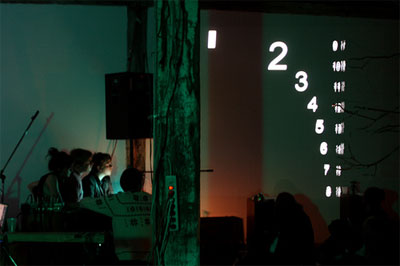 Performance of "Talfall" (Photo by Lisa Corson)
Perhaps "Hvitasuo" by Pall Ivan Pallson demonstrated the direct potential of video scoring most effectively to the uninitiated. Before the piece, Pallson distributed plastic party cups and instructed the audience members on how to position them in accordance to the length of slowly scrolling points in a projected diagram. Then came the sound: a relentless swath of pure white noise, which morphed differently for each individual in relation to the distance of the cups to his/her ears. 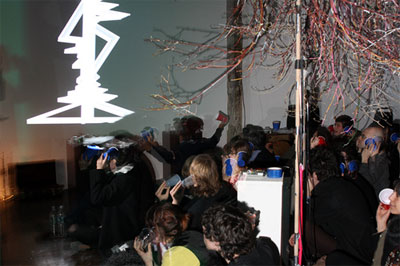 Audience during "Hvitasuo" (Photo by Lisa Corson)
While projected scores are nothing new to the experimental music community, graphic dataflow software like Max/MSP (and its free counterpart used by Hestbak members, Pd ... 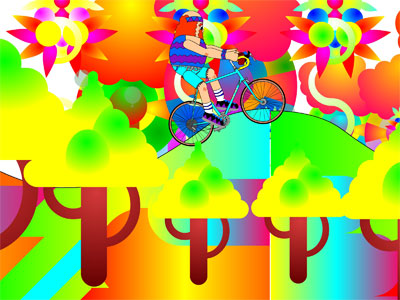