Analog Film in a Digital World 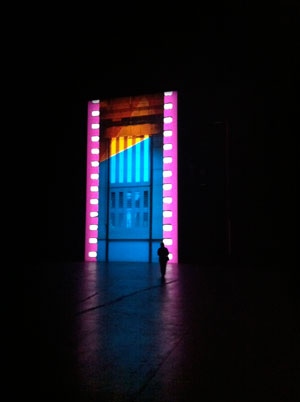 Joanne McNeil, editor of Rhizome, writes about Tacita Dean's work with and activism for analog film for the Paris Review Daily. An exhibition of Dean's work is currently on view at the New Museum.

As her very craft faces extinction, it fittingly became one of her subjects. Last year, Soho Film Laboratory, where she was a longtime customer, abruptly ended new orders of 16mm film prints due to new management. She was at the time preparing an installation for the Tate Modern’s Turbine Hall, as The New Yorker explained in a profile of Dean last autumn...

Nostalgia is not quite the right word to describe how Tacita Dean relates to celluloid film. She is firmly rooted in the present while considering what might pass. There’s no vaseline on the lens or sepia tone here. Her nostalgia is not for film itself, but film’s way to relate the experience time. A film projector measures out minutes and seconds relating to the speed that the footage was shot.

"Film is time made manifest: time as physical length - 24 frames per second, 16 frames in a 35mm foot,” she wrote in the accompanying wall text. “It is still images beguiled into movement by movement and is eternally magical. The time in my films is the time of film itself.” 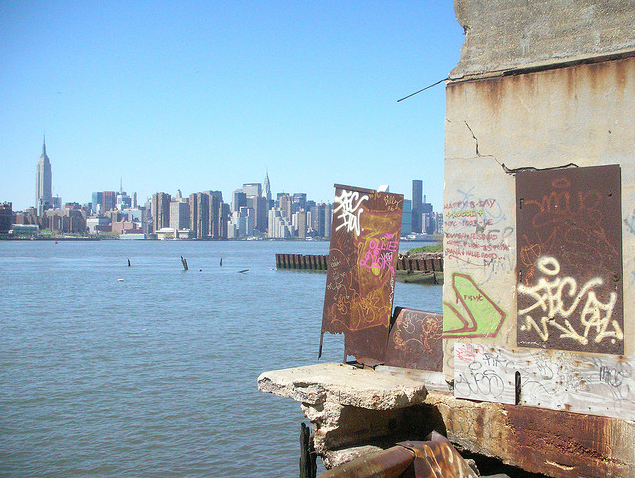 Projected Projects: Slides, PowerPoints, Nostalgia, and a Sense of Belonging

The discipline of art history used to have a sound, the click and growl of the slide projector. It had a look, too, that was composed of darkened lecture halls and sometimes-blurry images of a unified size.

Kodak stopped manufacturing 35mm slide projectors in 2004, a decision in line with the company's current focus on digital photography. The website dedicated to Kodak slide projectors has been archived as a frozen version, current as of November 2004. Soon enough, that website would seem as old fashioned as the famous poster celebrating the invention of the carousel slide projector.

ABC's "Mad Men" credited Don Draper, the head copywriter at the ad firm the show focuses on, as the inventor of the term "the carousel," for Kodak's then-cutting edge technology. In the scene where he pitches the term to Kodak, he states, "The Greeks call it nostalgia. [...] It's a twinge in your heart, far more powerful than memory alone." 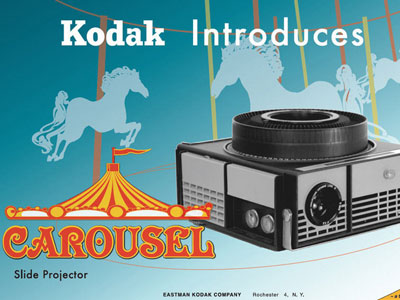 The fact that slide projectors are now becoming a technology on the verge of death invokes a new feeling of nostalgia. Slide projectors were commonly used for varied purposes, from the family slideshow through the business meeting display, and up to illustrated lectures. These devices were commonplace and their aesthetic, sound, and use bring up familiarity and a certain tradition.

In 2005, shortly after Kodak's announcement that it will no longer produce slide projectors, curator Darsie Alexander at the Baltimore Museum of Art organized the exhibition "Slideshow." Featuring nineteen works made between the 1960s and the early 2000s by artists such as Robert Smithson, Dennis Oppenheim, Ceal Floyer, and Dan Graham, "Slideshow" celebrated the medium itself. It was presented in a series of darkened rooms where the only light came from the slide projectors and the sound of the changing slides echoed throughout...

Required Reading: One Terabyte of Kilobyte Age: Digging through the Geocities Torrent by Olia Lialina and Dragan Espenschied 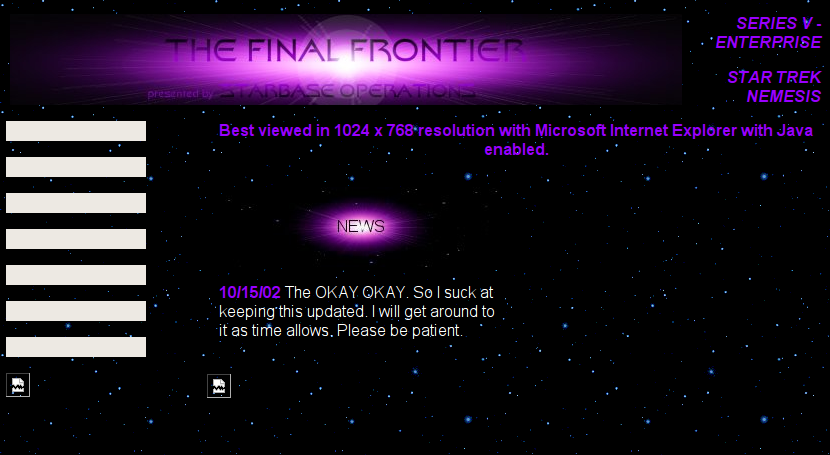 A new blog by artists Olia Lialina and Dragan Espenschied, One Terabyte of Kilobyte Age: Digging through the Geocities Torrent is an inventory of one terabyte of pages from the now defunct Geocities, proved by the Archive Team. 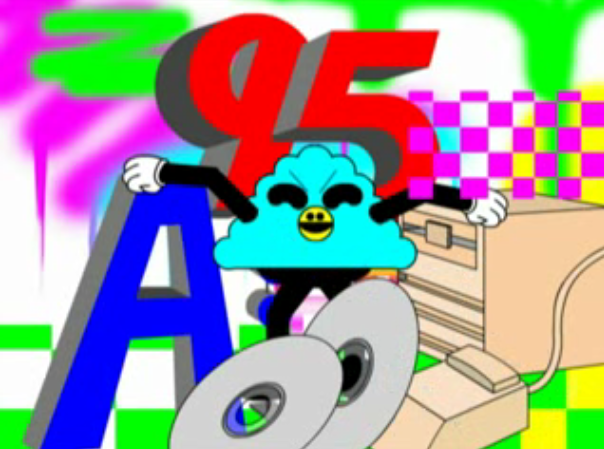 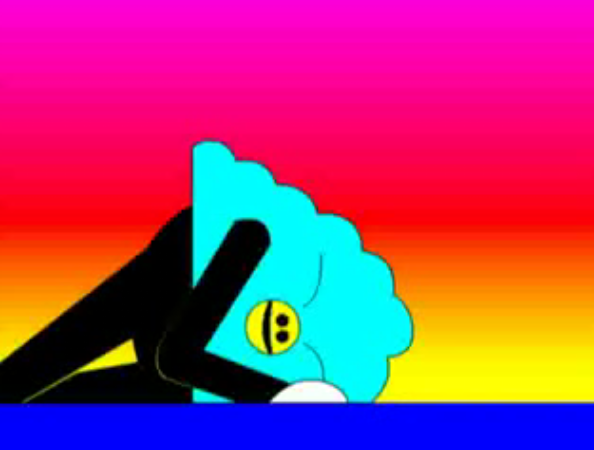 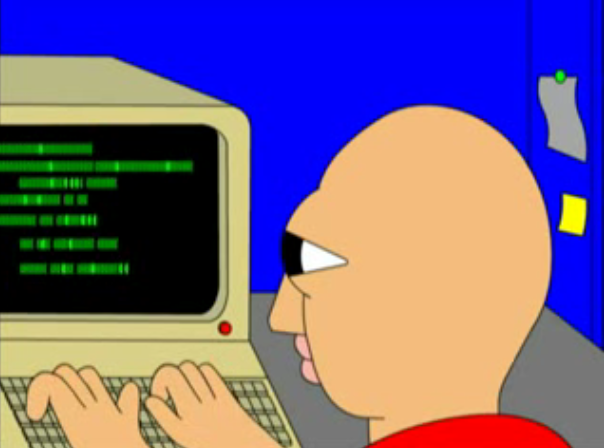 In a work such as Martha Rosler’s 1993 video How Do We Know What Home Looks Like?, the decayed and contested architecture of Modernism appears both outdated and up-for-grabs: a fading Utopian inheritance that barely hangs on to its (then routinely disparaged) potential for collective aspiration. Rosler’s intimate exploration of Le Cobusier’s Unité d’Habitation at Firminy-Vert, in south-central France, showed a dilapidated building that had been in part redecorated by its tenants (as per conservative clichés about the impersonality of high-rise living) with aspirantly bourgeois wallpapers and private souvenirs, but still retained a sense of embattled technological community, typified by the radio station installed on its roof. It was, however, among artists who referred, directly or obliquely, to the end of the Cold War and the collapse of the Soviet Bloc that the theme of ruin flourished in the 1990s and beyond. Tacita Dean’s film Sound Mirrors (1999) broods over the remains of British prewar acoustic early-warning technology that seemed to presage the silos and satellite dishes of the Cold War, while later Berlin-based films such as Fernsehturm (Television Tower, 2001) and Palast (Palace, 2004) more readily reflect on the ageing or half-demolished architecture of the East. That strand of explicitly Ballardian ruin lust has continued, too, in certain works by Jane and Louise Wilson - notably, their treatment of Victor Pasmore’s Apollo Pavilion in the postwar town of Peterlee, UK, in A Free and Anonymous Monument (2003), and their own return to the Atlantic Wall in Sealander (2006) - and in the ambitious project of the Center for Land Use Interpretation to document (among many other types of landscape) the defunct sites and artefacts left behind by the US nuclear weapons and space programmes in the second ... 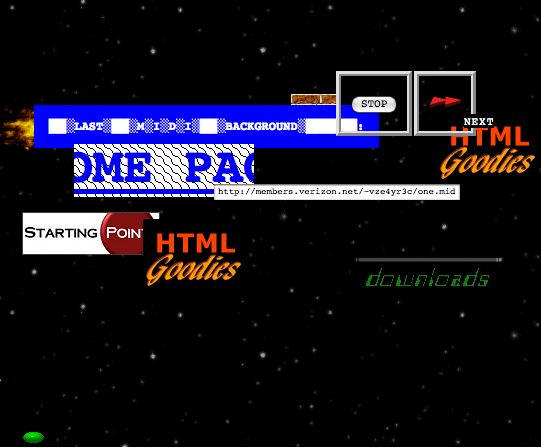 Last Midi Background (LMB) is a project by Sebastian Schmieg, a Berlin-based student focusing on new media and stuff.

It is an internet radio, a cyberspace shuttle, and a kind of archive. LMB takes you on a journey through an almost forgotten web that is loud, colorful, often "personal", and doesn't care about standards. Though it might be forgotten by many, some parts of it are still there, waiting to be explored. And maybe we can learn something along the way.

LMB plays a continous stream of MIDI music. However these aren't just random tunes, instead the songs are taken from websites where they are being played as background music.

While playing a song the LMB cyberspace shuttle flies through a stream of images that have been taken from the website you're (kind of) listening to. 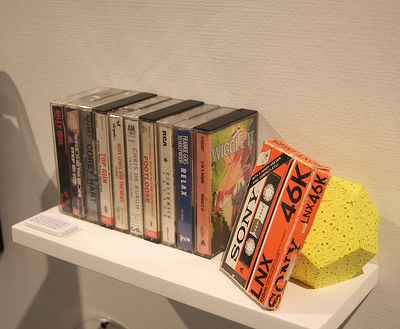