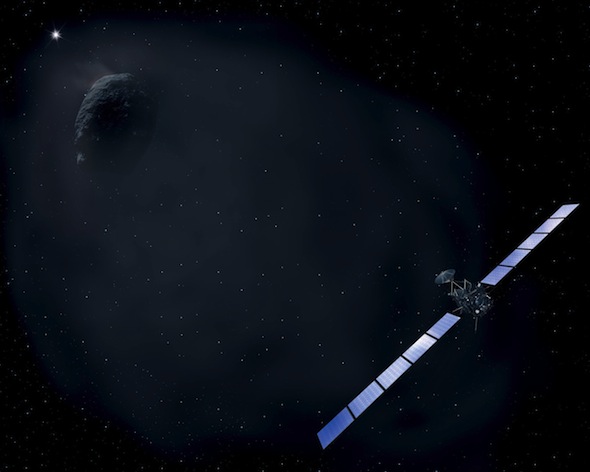 An artist's impression of Rosetta waking from deep-space hibernation to rendezvous with Comet 67P/Churyumov-Gerasimenko in 2014. © ESA, image by AOES Meidalab.

In May, the Rosetta spacecraft will make its final approach toward the comet 67P/Churyumov–Gerasimenko, after patiently stalking the space rock for ten years. As the comet approaches its perihelion, it will slow to dig its foot into a gravitational eddy and steer itself around the sun. As it emerges, Rosetta will strike, launching a sensor-packed lander like a javelin into the side of the comet. Harpooned in place, the lander will allow us to reach out across the cosmos and caress a billion-year-old piece of the solar system.

The experiments are scheduled to last two months, after which Churyumov–Gerasimenko will have arced around the sun and begun accelerating back out into deep space. When it does, it will take with it a small piece of humanity anchored to its side. Forever after, this relic of early 21st century technology will remain looping above us, a time capsule buried ten years deep in space.