Towards a Theory of the Dick Pic (NSFW) 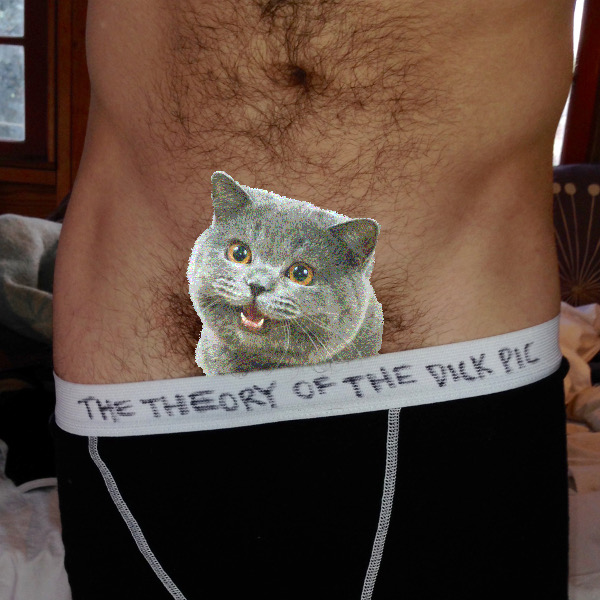 At this very moment, countless dicks compete for your attention. Some archived and waiting to be accessed through the same internet search tools you use to find new restaurants, some directed at you personally through the same applications through which you tell your family you are doing just fine. Surely, in your 5-block radius, someone is in the process of organizing his, her, or their junk for a photo, and someone has, to their disdain or delight, on a phone or computer that looks remarkably like yours, just laid their eyes on one.

Despite its omnipresence, the dick pic is remarkably under-theorized. Besides the click-bait paradigm of pathologizing individual senders (albeit sometimes deservedly), the aesthetics, history, and (yes) cultural significance of dick pics has yet to be worked out. But I'm taking up the task today. With a bit of panic and a lot of excitement about debasing my philosophical heroes, I will attempt to place the dick pic at the intersection of anatomical and juridical photography, the #selfie, pornography, and finally, the global brand.[1]

Even while the Tumblr Critique My Dick Pic urges its users to think beyond size (and, crucially, beyond gender), it seems essential to remember that measurements—size, width, length, girth, whatever—are some of the dick pic's primary obsessions. Consider how many include a lighter or pencil for scale—or, most literally, are framed against a measuring tape (as in a mug shot). This desperation to quantify persists despite the reams of seemingly excellent advice that sex partners couldn't care less, and the intuitive or experiential evidence that some particularly endowed forms do not function during sex. Size seems inherent to the dick pic's peculiar forensics.

Why the obsession with measurements? In the now-familiar narrative, photography served the essential modernist drive to link vision and truth. Allan Sekula's seminal text "The Body and The Archive," essential for discussing our collective compendium of single body parts, traces photography's perceived truth-function to its mobilization by the police. Indeed, the interpretive conventions of the photograph were established within phrenology and physiognomy, two disciplines bent on interpreting the body's "truths" through its measurements, most often to diagnose criminal or medical pathologies. Of course, during a period of European colonial expansion and in the midst of the emergence of Darwin's theory of evolution, the "truths" photography exposed were often classist, racist, and sexist fictions intended to legitimate class, racial, and gender differences "on organic ground."[2]

Two architects of the medical and criminological image serve as instructive examples for the dick pic's hermeneutics. In the late 1800s, French criminologist Alphonse Bertillon invented a schema for identifying suspected criminals that required their photo archived according to 11 measurements of their body—identification made possible through calculated comparison. Embedding each new photo in this expanding archive, Bertillon called for what Sekula described as "a massive campaign of inscription, a transformation of the body's signs into a text." That dick pics are, on some level, streams of textual 1s and 0s makes this inscription literal.

Around the same time, as Sekula tells it, Francis Galton, the founder of eugenics, invented the composite photograph as a tool to determine a generic criminal type. Galton would take a series of photos on one piece of film and underexpose each according to the ratio of photos in the series so that, he argued, only the visual similarities would emerge. Here, the process called for by Bertillon is inverted: the archive is embedded in the photograph. Galton's methodology is a disturbing precursor of the algorithmic tools that construct our every photo, separating the signal from the noise according to predictive data generated by prior images. Each dick pic, then, bears the marks of all others that came before.[3]

Dick pics suggest that masculinity as we know it was a product of modernity's visual regime. Not only did modernity seek "a biologization of existing class relations," pathologizing the proletariat, as Sekula wrote, but a biologization of existing gender relations as well. It's not that modernity created the demand for a visual basis for masculinity—for centuries, at-birth gender assignments have violently enforced a binary schema on a continuum of genital cues. What modernism added to the farce of gender was the absurd idea that masculinity could exist as a rational quality on a scale, which makes some "more men" than others, and it proliferated the even more absurd idea that that "more" could be marked by the visual cue of a larger cock. At the heart of a dick pic, then, is a profound anxiety about value and the modernist notions that have governed our world.[4]

The dick pic, though, is rarely just about genitals. The discourse around 19th Century medical and juridical photos was characterized by a constant anxiety about extraneous information, prompting a need for what medical scholar Martin Kemp calls "visual pointing."[5] The crumpled sheets, bad lighting, and dirty bathroom floor of the average dick pic take the place of the extraneous details of fashion and setting in the early medical or juridical photo. The very conventions of the genre—and the lack of visual information in the average cock—ultimately promote the ground over the figure of the dick, and, by the logic of conspicuous consumption, highlight mise-en-scène—and not the dick itself—as the ultimate assessor of the dick pic's impact or import. In Suzannah Biernoff's words, "as historical and cultural artifacts, they inadvertently reveal too much."[6]