What can be analyzed in my work, or criticized, are the questions that I ask…my composition arises out of asking questions. 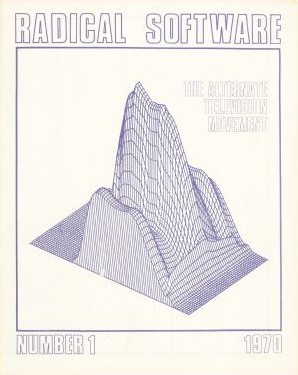 As rare as it is for something to be an instant success, this is what happened with Radical Software, a journal started in 1970 to bring a fresh direction to communication via personal and portable video equipment and other cybernetic explorations. Its intention was to foster an alternative to broadcast media and lessen the impact of its control. I was the co-founder.

When I began conceiving of the journal, no one really knew precisely what I was getting at because my ideas about it were at an inchoate stage of development, making for loose coherency. The idea was for individuals to be able to communicate interactively without the filters of broadcast media. Even at a more formalized stage the process superseded any formulaic views. Perhaps asking non-hierarchical questions could materialize the structures leading to a two-way network for communicative exchange. Our choices were no longer determined by traditions and customs.

I don't often look, but when I do, I notice so much misinformation, both printed and online, about the origins of Radical Software. I‘d like to clarify what my role was then and what my inspiration was in conceiving of it. It is important to set the background and tone of events. In order to accurately tell the tale I will weave in some personal life anecdotes from the time. It's all one story to me, as the vicissitudes of life often direct our fates.