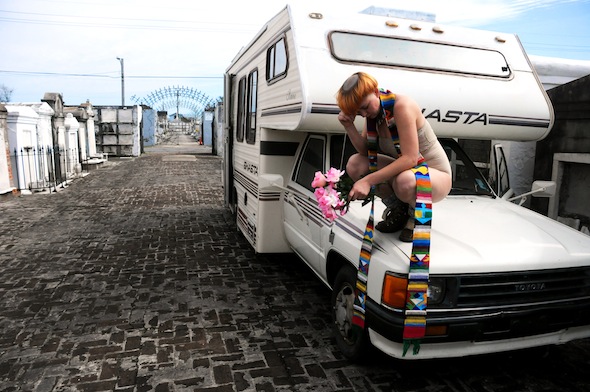 I've always found your practice really interesting and sort of futuristic in how it seems to concern itself with the faith science of "connection" as and where we find it. With your internet broadcasted reality show-performance-rituals, it was like you were tying together the rituals of spirituality with the exalted new [visual] language of technology. In this way I always felt like you were kind of an ecstatic, but now it looks like you're becoming an ascetic…?

My foray into asceticism was sparked by peak ecstatic experiences: I’ve always tended to vacillate between extremes of solitude and sociability in my life/art, and one inevitably informs the other. I've now re-emerged from that deeply ascetic period during which I lived in my Mobile Monastery RV under a bridge in New Orleans. At that time I was curious about a personal ecstasy that I felt existed beyond the compulsive internet use and rave/club kid culture I had become entrenched in back in NYC. I was reading Thomas Merton and wanted to know more about his ideas of solitude and silence, so I logged off Facebook and Instagram and took a pause to reflect on how that felt for me. I was primarily alone for two months, sitting still in a cold, powerless RV all day, but I let myself use Twitter as a platform to share through language alone. I've always been a comfortably hermetic person by nature, only recently learning how to function in a social sphere in a way that feels truly authentic to me. This period of silence was really important as I was able to remember and reflect upon deeply personal experiences that I had never given myself the space and time to carefully examine. It was a bit like a crowd funded arts residency or sabbatical: an interesting alternative model for artists seeking to clear a sacred space for creation.