Curated by writer Tim Maly of Quiet Babylon, the tumblr blog 50 Posts About Cyborgs assembles links to material on the cyborg in celebration of the term's 50th anniversary this month.

Originally via BLDGBLOG and Bad At Sports 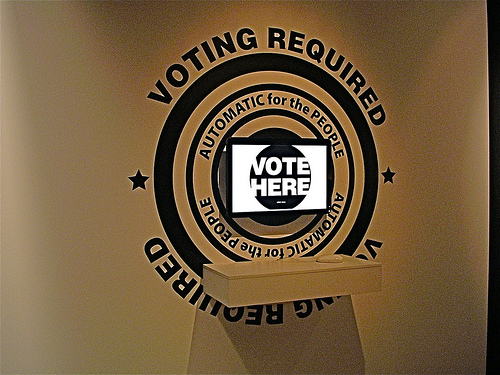 In the fall of 2008, the San Francisco Museum of Modern Art invited several artists to create a new work for the exhibition "Art of Participation: 1950 to Now." One such invitation was extended to MTAA, a Brooklyn-based duo comprised of Mike Sarff and Tim Whidden, alternately known as M.River & T.Whid Art Associates. In response, MTAA constructed a poll-based project entitled Automatic for the People ( ), which asked the audience to vote upon the parameters for a theatrical performance executed at the conclusion of the exhibition (the title’s empty parentheses refer to an undetermined subtitle). Technically, the voting consisted of ten different electronic ballots addressing such creative and procedural elements as duration, space, and props, with each being accessible for one week at a museum kiosk and remotely online. All ten ballots contained ten options, and the most popular selections were incorporated into the live finale. During the summer of 2009, I enlisted MTAA in an email-based interview regarding the practical consequences and conceptual implications associated with producing their participatory poll and performance for SFMOMA. 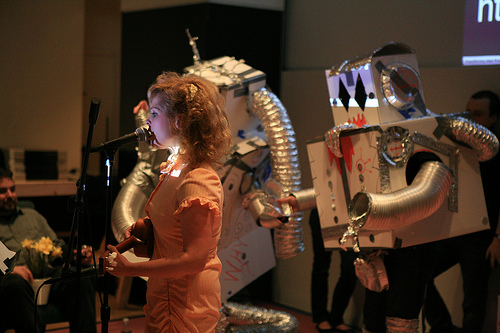 DAVID DUNCAN: Let’s begin with the project’s finale. Can you give an overview of the performance— the staging, players and performers, costumes, and actions?

MIKE SARFF and TIM WHIDDEN: We began with the idea that the live work should come together as a unified whole; we felt that a series of unconnected actions would feel untrue to the vote process. We also wanted the audience to participate in the performance. To achieve this, we established three boundaries— installation, duration and action. For the installation we had a location outside the museum’s freight elevator that was selected by vote. The performance’s duration (the same length as the REM album Automatic for the People) was also selected by vote. The action involved two teams competing to create the best robot costume—again, an element determined by vote. Lastly, we included interruptions to the robot costume building competition. These we called interludes and digressions—they were essentially acts between acts that helped to pace the performance. The goal was to make it all seem solid even if an audience member did not know anything about the whole of the AFTP: ( ) voting process.

DAVID DUNCAN: Beyond the audience’s participation, did MTAA conceive AFTP: ( ) in cooperation with the SFMOMA staff?

MIKE SARFF: Yes, it was conceived for this space and institution. It would be good to note here that although the vote kiosk installation and ... 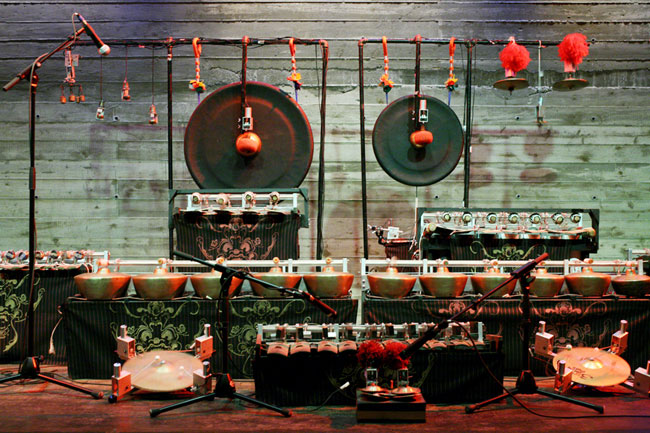 The Gamelatron at Galapagos Art Space from Zemi17 on Vimeo.

Modeled after traditional Balinese and Javanese gamelan orchestras, the GamelaTron is an amalgamation of traditional instruments with a suite of percussive sound makers. MIDI sequences control 117 robotic striking mechanisms that produce intricately woven and rhythmic sound. Performances follow an arc similar to classic Indonesian gatherings, where stories from great epics, such as the Ramayana, are told and settings given in words that are continued in music. 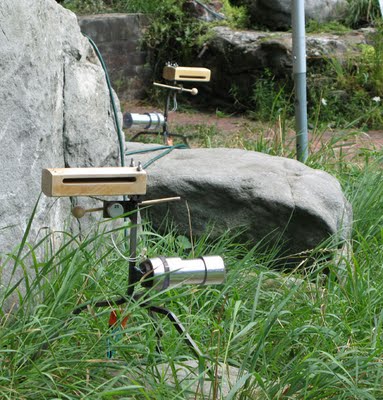 prototype for an infinite array of semi-autonomous percussive devices is a group of small robotic sculptures, each connected to its immediate neighbors via wires, that together form a net of robotic life that spreads across the Garden at the Mattress Factory and over nearby structures. These twenty-five mechanical crickets fill the garden with sound as they listen to their neighbors and act accordingly during Pittsburgh's Robot250 festival. Using Dr. John Conway’s rules for The Game of Life, each robot activates when a preset number of his neighbors is active and deactivates if too few or too many of his neighbors are active.