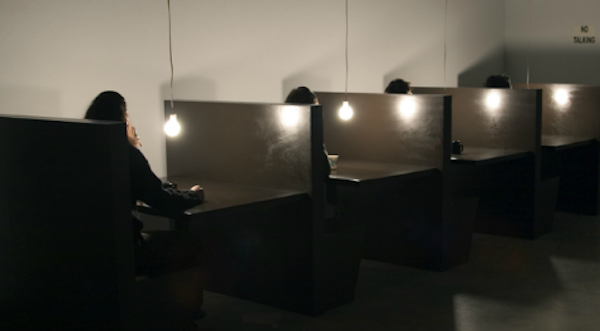 Fiction, history and reality are constantly being intertwined throughout your work. How do you balance the phantasmic with reality? How do these techniques propel or help understand the history and politics in works like As it might, could, did happen and Was Bourguiba, then Ben Ali, awaiting the next?

The balance is very vague and I keep it so as long as possible. I want the viewers to find their own balance.

When Bourguiba first came to power, he was hailed as a savior, a liberator of the oppressive French. Images of him where everywhere. He cultivated that cult, just like any other dictator and was able to hold on to power for a long time. The fiction of the liberator was trying to negate the reality of living under his reign.

In my work I ask the viewers to consider what is being presented, to form their own understanding and opinion. In As it might, could, did happen, I recreated a bedroom (with furniture made of cardboard and wood imitation vinyl) in what was a East German Pioneers boarding house. The furniture looked almost authentic, but not quite. It played with the pre-conceptions of how East German furniture looked cheap and homogeneous. But the environment was real. So the balance here between fiction and reality is very flexible.

In one of your project’s statements you describe the struggle with your identity as the following: “I want to be this icon, this Frenchness, while also being who I am a mix breed, neither one nor the other. Arab, but French, but American, but becoming German?”

With this, works like, La distinction entre un carthaginois et un hexadecagone, au subjonctif, Layered Tense, and Pictures I wish I had are attempts at contextualizing ...