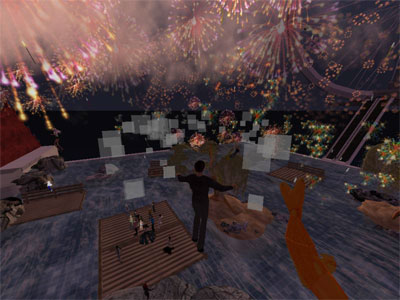 Rhizome's curatorial fellow Brian Droitcour covered the grand opening of Cao Fei's RMB City in Second Life for Artforum's Scene & Herd last week, easily the first entry posted to the magazine's social diary to report from SL. Brian describes the festivities with a sense of humor, it's a fun read. Click the below for the full article. 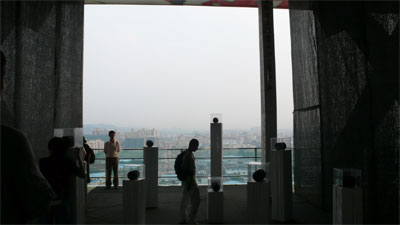 I ascended the theoretical and actual quagmire of the top floor where the rain poured dangerously close to the numerous sound and video installations from German artist Marc Behrens, the Chinese collective Sound Unit (Zhang Anding ...

The Rhizome Commissions Program was founded in 2001 to provide support to emerging artists working with new technologies. The forty-four works commissioned to date represent some of the most innovative, pioneering efforts in the field. At the New Museum on May 22nd, several artists who received support in the 2008 cycle will present their finished projects as well as other select projects. Artists to present include Evan Roth, Eteam (Hajoe Moderegger and Franziska Lamprecht), Steve Lambert and Rafael Rozendaal. 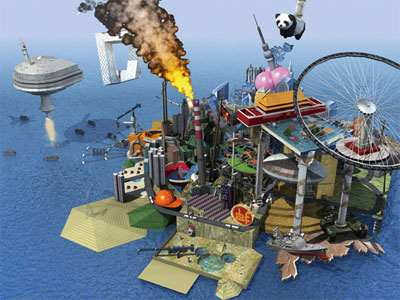 Beijing-based artist Cao Fei uses her activities in Second Life (SL) to draw fantastical parallels to socio-political scenarios in real life. As it turns out, SL is a perfect place to consider city planning and the cultural drives behind development patterns. It is, afterall, one big experiment in participatory design, with users constructing their world and everything in it, even carrying out social relations in a highly-systematized manner. Fei's avatar, China Tracy, made a three-part documentary of life in this society, called i.Mirror, which was included in the Rhizome-curated exhibition Montage: Unmonumental Online. For Fei's current show at New York's Lombard-Freid Projects, she once again displays the fruits of Tracy's labor, with RMB City. The gallery has become a retail space for the promotion of this "experimental utopian world," in which institutions and investors have been invited to participate as organizers. Fei's exhibition includes "pure white" sculptural models of the city, builder's tools and materials, laptops for connecting to Second Life, and stills from Tracy's newest documentary, RMB CITY-A Secondlife City Planning, which is also projected onto what looks like a pool of water. The sailing city constructed in Tracy's film has all the trappings of a grown-up society, complete with transportation infrastructure, industrial pollutants, and diplomatic pandas, but it feels almost like a child's imaginary assemblage, constructed of toys, junk, and futuristic roadways, some of which end abruptly, depositing travelers into the vast ocean around it. The film's soundtrack further pushes the trope of "play" with its softly soothing electronic beats. (One imagines this score could gently drown-out any voices of resistance.) According to Fei, the city reflects "the condensed incarnation of contemporary Chinese cities with most of their characteristics; a series of new Chinese fantasy realms that ...

One Avatar's Trash is Another's Treasure

The world is full of junk. Why should Second Life be any exception? In fact, something about the technological impetus to always create new, more advanced gizmos and realities makes this online virtual space a perfect site for the consideration of trash. The New York-based German art collective eteam are doing that now, in their project Second Life Dumpster. The duo's work often revolves around land-use issues and other socio-spatial interventions, and in this case they purchased 4096 square meters of space in SL to start a plein-air dumpster. The artists visit freebee sites throughout the virtual world and bring the detritus back to their space, and also encourage other users to drop their garbage at the site. Snippets of chat sessions with other avatars posted to the Second Life Dumpster blog reveal the humorous social challenges of keeping such an operation running. The project received a 2008 Rhizome Commission and their original proposal was to carve out a new type of behavior on Second Life. The site's owners, Linden Labs, say that exploring the world (including crafting one's persona and visage), creating objects, and selling those objects are the primaries forms of activity there, but eteam wanted to ask what happens after self-actualization and the ultimate disposal or withering of the ephemera exchanged in this process. After all, virtual junk is still junk, and its weighty presence online is but a mere token of the refuse our high tech lifestyles generate in "first life." If you're in the real world city of Brooklyn, this weekend, you can visit Smack Mellon to see the artists' physical rebuilding of decaying Second Life objects. Otherwise, check them out online or even consider joining the cadre of dumpster divers now hanging out at Fearzom. - Marisa Olson